How To Save Your Google+ Community (And Other Dying Networks)

Reading Time: 3 minutes What do you do when your top social network, where you have spent years building an audience, no longer wants to exist?

You are here: Home / Social Media Articles / How To Save Your Google+ Community (And Other Dying Networks)
Reading Time: 3 minutes 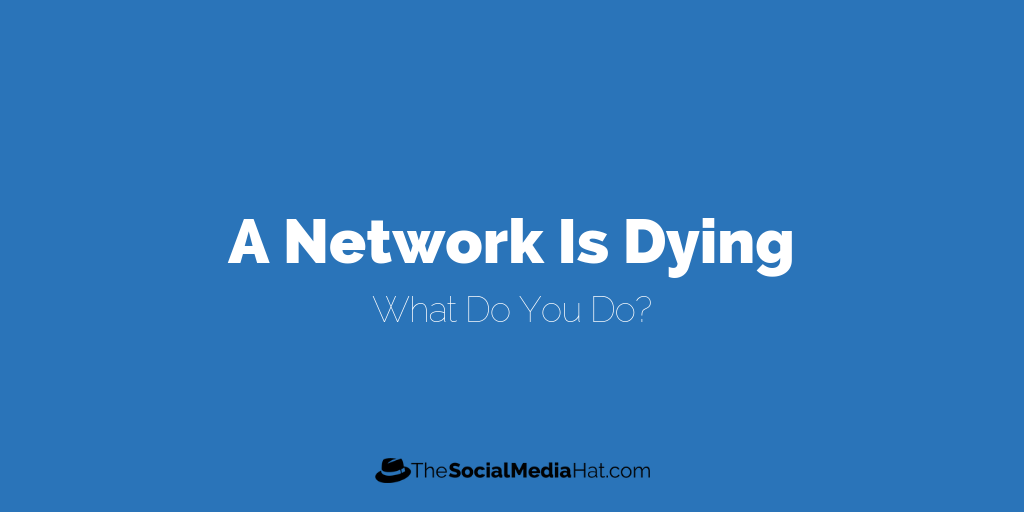 The powers-that-be have decided that one of the social networks I spent time building an audience and creating a community on, is no longer worth their investment of time and money. They’ve pulled the plug, and that means my community there is about to flatline.

Now, you know I’m talking about Google+, but I could just as easily be talking about Vine or Meerkat or Blab or MySpace or Posterous.

Listen to me now… I could also just as easily be talking one of the networks that you’re using right now. Right this moment, I could cite 5 reasons why Snapchat or Tumblr or Twitter or WhatsApp could be the next network to vanish, or at least change in such a significant way as to be no longer viable for you and your business.

This fact is so critical and elemental to the existence of these platforms – and how they impact our lives and businesses – I actually started tracking monthly usage to try and envision future potential.

While it might be hard for most businesses to avoid social media marketing altogether – that’s usually not competitively feasible – you can certainly mitigate risk. As a business owner you can make sure that you have at least 2 social networks that you’re focused on, making sure that Facebook is one of them. If an important network to you goes away (or even if it’s just your own page or profile that disappears for any reason), you still have a backup option that’s not starting from scratch.

But let’s bring this back to me and my problem.

Just a few years ago, when people still used Google+ every day, I sported a quarter million followers.

250,000 followers isn’t too shabby for a non-celebrity, and back then, that network drove significant traffic and business my way. But obviously those days are long.

Over the past couple of years, when it became clear that Google was no longer interested in having anything to do with this network (a fact that crystalized the day VP Vic Gundotra left), tens of thousands of my former followers have left the platform. I’ve watched as my follower account as receded worse than my hairline!

But interestingly, there’s still life there. Every day I still post evergreen and curated content and every day I still get +1’s and comments and shares. And the Google+ Communities that I own continue to attract new members! It’s quite paradoxical.

And thus my problem.

I have tens of thousands of community members who are still actively using Google+ and who, within a matter of days, will no longer have that community. How do I move or migrate or invite them to someplace else? (And note that currently, there is no technical way to migrate followers or community members.)

I discussed this with friends and colleagues Stephanie Liu and Heidi Cohen and this is what came out of that.

First, create a landing page on your own website. What you want to be able to do is give your community members a few options. Maybe they just want to stay connected to you personally, while others might want to find a new community or group or tribe they can join and try to have the kinds of discussions they’re used to having. It’s best to drive your still-active followers and community members to a single place where you can talk to them and lead them through these choices. Here’s what mine looks like.

Second, think about what, exactly, you want them to do. Do you have a Facebook Group already? Or do you need to create one? That’s what I did! I had an old FB Group that was really only for testing purposes and I complete revamped and rebranded it to make it a viable resource. I also have a paid membership group, as well as a support group for one of my products. So may landing page lists all of those.

Third, consider adding one or more of your other social profiles, either personal or brand.

A word of caution here: be as limited and strategic as possible with the options you offer. The theory of the paradox of choice states that the more options we’re given, the less likely we are to choose any. Now it’s likely that most of the options you present will be free so there’s less risk, but still. Don’t overwhelm your followers with links and buttons.

Finally, once you have your landing page up, share it! Share it to your profile on Google+ (or whatever social network you’re hoping to save), as well as in any communities you own. If possible, pin it to the top (click on the post’s menu button and look for Pin Post) so that visitors to your profile will be sure to see it. And while you’re at it, share that link to some of your other social profiles as well, particularly if you’re promoting a specific Group you want folks to join.

At the end of the day, social networks are fluid, tenuous, capricious entities. They’re incredibly valuable and profitable for brands, but that doesn’t come without risk. But armed with the knowledge in this article, you can minimize that risk as much as possible!