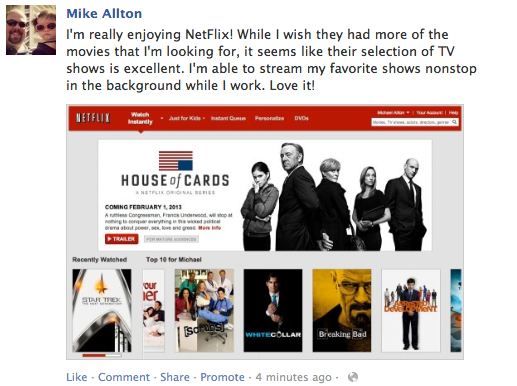 The Internet and Social Media are becoming more and more visual, and social networks like Facebook have recognized that fact and are constantly working to make it even easier to share images. Facebook recently implemented an improvement to the Status Update feature for the full web version that allows you to drag and drop images to the status update field, as well as upload and attach multiple images to your update.

In the screenshot to the right, you can see an update I posted earlier this morning where I was able to easily drag an image into the status update box after I’d begun typing in my update. Once the image uploaded, I was given the opportunity to drag more images into the space if I wanted to.

After saving, the udpate appeared as expected, but it seems to me that the image presentation is a little different now too, perhaps larger and more prominent.

Just recently, Google+ implemented a feature that lets smart phone users automatically upload all the pictures they take to their Google+ account, so that all you have to do is open your Google+ app and choose which images you want to share with others.

If, as a business, you still aren’t sharing many images over your social networks, now is the time to start. Facebook, Google+ and Twitter are all working hard to make it as easy as possible to engage your followers. What are you waiting for?