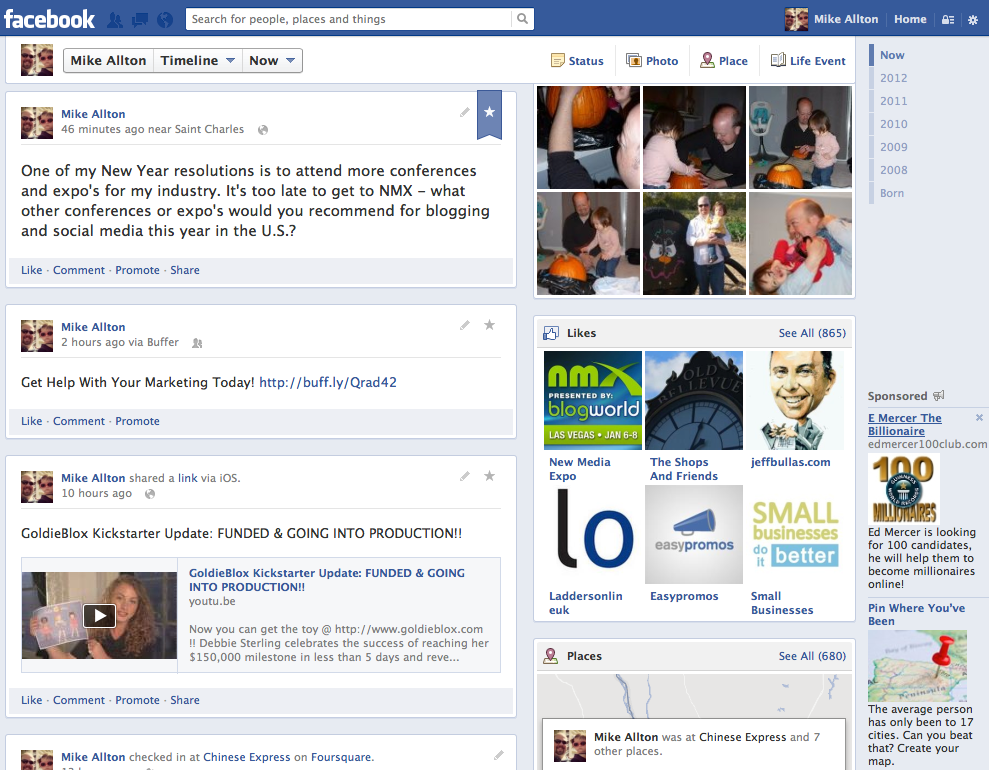 Facebook has publicly acknowledged that they are experimenting with the layout of your personal profile pages in order to make the layout simpler and more intuitive. When Facebook released the new “timeline” layout earlier in 2012, it was received with mixed reactions, with many users waiting until they had no choice to activate the new layout. While no one likes change, hopefully the new Timeline layout will be better received.

Facebook has stated that it will be testing the changes on a limited number of users in order to gauge reception and usage. I’m not sure if I should be honored or not, but I noted today that my own profile was one of the few selected to receive the new updates. Here’s what I’ve noticed so far:

First, the most prominent change is the fact that my timeline layout has reverted back to two main columns. Status updates and news items appear in the larger left column, while a series of boxes are in the right column containing Recent Activity, Friends, Photos, Likes (Pages), Places, Likes (Stories), Quora (Following), Slideshare, Pinterest, Quora (Questions), FourSquare and Instagram. Obviously many of those boxes are tied to third-party sites and apps that won’t be the same for everyone. Additionally, several of the apps are providing sets of data that are divided into different boxes, and it would seem more user-friendly to have all that activity together.

Take a look at the screenshot above to see a screenshot of the new layout.

If you are able to view your own timeline in this layout, the change is effective for any other profile you might view.

What’s been removed, clearly, is the back-and-forth display of staggered events in your timeline that previously consumed two vertical columns. Also, if you highlight one of your updates, it no longer expands in width. Currently, all that happens is a small dark blue flag with a white star appears at the top of the post. It’s possible that the highlight feature may be removed entirely, if it is to have no real effect. 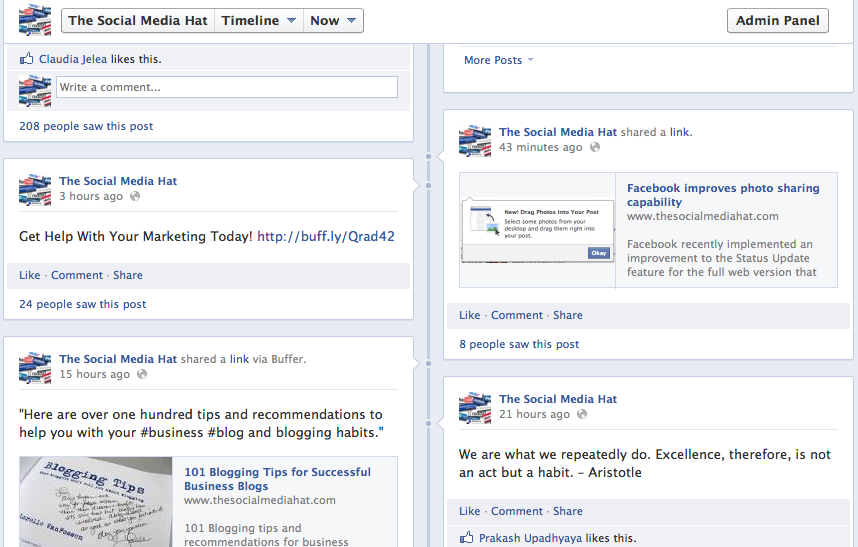 As you can see in the above screenshot, The Social Media Hat’s Facebook Page layout remains unchanged. This suggests that, at last for now, the Timeline layout for businesses will remain the same. It’s also possible that once the changes are finalized for personal profiles, they’ll be implemented for Pages as well.

It has been reported that there will be additional changes coming. Your profile navigations are going to be presented as tabs, including buttons like Timeline, About, Friends, Photos and more. Your name will be lifted to the cover photo. The word “subscribers” will be gone and replaced with “followers.”

What do you think so far? Are you able to see the changes in your own timeline? If not, how do these sound to you? Do you think the new timeline will be simpler and easier to use, as Facebook suggests?