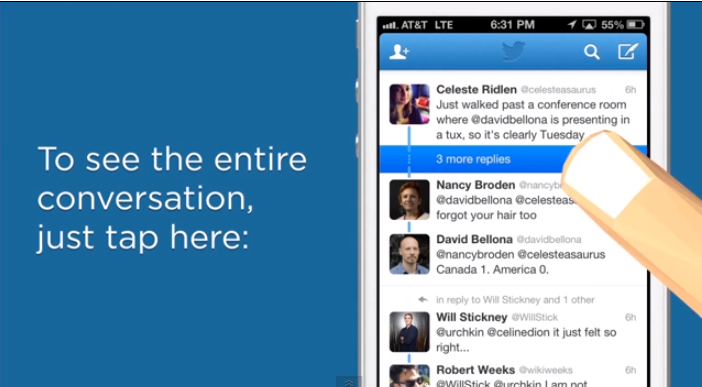 Twitter released an update to their mobile apps today that makes significant changes in the way Conversations are displayed and function. Within Twitter, a Conversation exists any time someone creates a Tweet, and someone else replies to that Tweet. They must be “public” tweets and not Direct Messages, and can include multiple Twitter users. The Conversation thread is maintained by including each other’s Twitter handles.

What’s interesting about this update is that it is designed to encourage other people to join into existing conversations.

Now, whenever two people you follow are having a conversation, it will be indicated by a blue line.

Additionally, the first tweet in the conversation will now appear above the the most recent reply, so you can see what started the conversation, similar to normal Facebook or Google+ posts (you see the main post first, followed by comments and replies). If you decide you’re interested in reading any more of the replies, you can tap to see them all.

The update also includes some changes to the Notifications settings, bug fixes, login verification, and other assorted updates.

According to Twitter’s official blog post, “Today we’re updating our iPhone and Android apps, as well as Twitter.com, to make it easier to discover and follow conversations in your home timeline. From buzz about the VMAs to debates around upcoming football games, people come to Twitter to take part in these real-time, global, public conversations. To date, such exchanges haven’t always been easy to follow. With this in mind, we’ve now made it easier for you to see conversations as they’re taking place.”

Twitter released a charming video that demonstrates the new feature:

The change in conversations also includes the ability to share those conversations via email, regardless of whether your friends are on Twitter or not.

What do you think? Do you find yourself participating in long conversations on Twitter much?

The updates are available now in the Apple App Store and Google Play. Twitter’s blog did mention though that the update is being rolled out, so even if you have the udpated app, you may not see the new conversations immediately.