Why Followers, Not Follower Counts, Matter Most 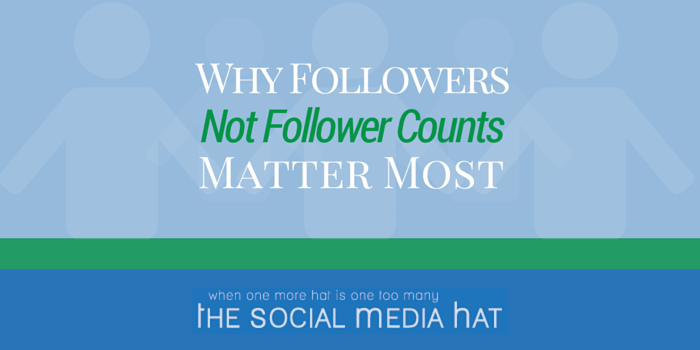 There’s a grand misperception among business owners and social media users that follower counts are extremely important. Too much talk and emphasis is placed on how so-and-so has one million followers. The reality is that after a point, none of that matters. It’s true that a new business Twitter account that has zero followers is both unimpressive and ineffective, but once you’ve picked up some followers, it’s highly unlikely that anyone else would care how many you have. What it boils down to is this: as a potential customer, am I going to choose to do business with you because you have ten thousand followers on Twitter? Does that matter to me? For most of us, the answer is clearly No.

But since that perception is there, many business owners and social media users will try to take shortcuts to getting more and more followers to their respective platforms, particularly Twitter and Google+. On those two networks, specifically, connections are One Way. I can follow you, but you don’t have to follow me back, or even approve that connection. So, I might follow you and a bunch of other people in the hope that you would follow me back. This is often called the “Follow First” method for gaining followers.

And it doesn’t work.

The first problem with this technique is that most people don’t pay a lot of attention to who is following them on Twitter or circling them on Google+. And if they don’t see that you followed them, it’s highly unlikely they’ll follow you back. And furthermore, of those people who do pay attention to their new followers, many aren’t going to immediately follow someone back for no reason. They may check out your Bio or your recent status updates to see if you’re someone they might be interested in. Therefore, only a fraction of the total people you follow are going to follow you back. If your goal is to add 100 new followers, you may have to follow as many as 1000 other people first. That’s a horrible return on your investment of time, even if you’re using somewhat automated tools to follow all of these accounts.

And what does all of that get you in the end? Nothing more than a number. If you get 100 random people to follow your account, that’s all they are. Random people. They aren’t targeted. They aren’t prospects. They aren’t likely to be interested in the slightest bit in what you do or are promoting.

And to make matters worse, following this massive number of random people initially has some pretty unhealthy consequences for you and your social presence. On Twitter, for instance, each time you follow someone, their tweets appear in your Home Stream. The more people you follow, the busier your Home Stream gets. Now, that’s OK if you’re following really interesting people, but what happens when you follow 1000 random people that you don’t know or care about? Your Home Stream becomes a raging river of garbage and nonsense. It’s not that there’s anything wrong, per se, with these individuals and what they’re talking about — it just doesn’t mean anything to you.

For example, here are a couple of random tweets that I noticed recently:

Check out this smart Chicken Parm recipe made with PERDUE SIMPLY SMART Chicken.

And those are relatively benign. When you follow random people, you’re far more likely to get completely foreign languages, personal conversations and more.

The result is that, for you, Twitter becomes mindless and completely useless. There’s little point in even glancing at your Home Stream because the tweets there have no value whatsoever. That’s a big problem because if Twitter holds no value for you personally, if you’re not getting anything out of the platform, why would you want to spend any time there? You’ll fall into the tendency to just broadcast your messages, probably from a third-party tool, and never once try to connect with real people or have real conversations.

You’ve taken the SOCIAL out of SOCIAL NETWORKING.

And there’s a technical issue here as well. Twitter and Google+ don’t want you to use techniques like this, so there are boundaries in place. You’ll only be able to use a technique like this for so long before the networks will stop you from following more people. What they expect is a more reasonable ratio between following and followers. If it’s obvious that you’re using Follow First to gain followers, they’ll stop you at a certain point.

Those are the people that you want to attract, right? People who might actually be interested in what you have to say and what it is that you’re promoting.

And by the same token, you want to follow other people and brands that you’re genuinely interested in. This will ensure that when you open Twitter or Google+, that Home Stream is filled with posts and updates and articles that you might actually want to read, as well as reshare with your own growing audience.

So start by abandoning the idea that you should follow as many people per day as you can. Instead, seek out interesting people and brands to follow. These might be peers and colleagues, vendors and brands in your industry, or thought leaders in your field. If you aren’t sure where to start, begin with someone noted in your industry or perhaps someone who has written an article in a prominent publication in your field, and find them on Twitter (hint: most online publications will include the author’s Twitter handle). Follow that person, and then check out who they’re following! it’s likely you’ll be interested in a lot of those people too, and may even recognize some of their names. Spend a few minutes every day doing this and soon you will be following dozens and dozens of extremely interesting people.

Next, make sure you’re sharing incredibly interesting status updates yourself. Part of your strategy certainly can and should include sharing and resharing other people’s status updates. Partly because your growing audience will appreciate it, and partly because the original authors will really appreciate it! If you routinely share my updates and leave me comments, starting a dialogue with me, I’ll begin to get to know you, pay attention to you, and may someday return the favor by sharing one of your updates. This is the beginning of influencer marketing, and should be a key component of any successful social media strategy.

But let’s get back to that content you’re sharing. While it’s OK to share a lot of other people’s posts and content, at least a portion of what you’re sharing should come from you, particularly if you can create blog posts and articles that are helpful and informative. That’s what will rapidly drive new people to begin to follow you on social media. They’ll use social media to remain connected with you, to see your new material, and to have conversations with you about the topics you’re writing about.

Here are some more ideas on how you can make sure that you’re regularly gaining new, interested, quality followers on social media:

Above all else, have a Content Marketing Strategy in place that helps you identify which social network or networks are going to be key to your business, and the kind of content you should be sharing there, so that you aren’t guessing on a week to week basis. These most important networks are the ones I refer to as Tier One Networks, and are the ones where we’re going to be spending most of our time. They will vary from business to business — some businesses might focus on LinkedIn or Facebook, while others may spend the bulk of their time on Google+. Whatever makes the most sense for your business, where you’re most likely to find those targeted followers, that’s where you should be. And that means it’s that network where you should be working to connect with more and more people. If Pinterest isn’t a priority for you, for instance, that’s OK. You can still set up some boards and have a light pinning strategy, and gain followers there at a slow but steady rate. Meanwhile, on your more important network, you’re commenting on posts and participating in discussions and rapidly gaining more and more interested followers.

This will ensure strong growth of your social presence, while at the same time make sure that you aren’t running yourself ragged across too many social profiles. So drop Follow First, and start Engaging First.