Wouldn’t it be nice to have the influence and marketing know-how to grab the attention of your target audience every time you shared something to social media?

You are here: Home / Social Media Articles / How 5 Marketing Influencers Are Creating Action on Social Media – And You Can Too
Reading Time: 6 minutes 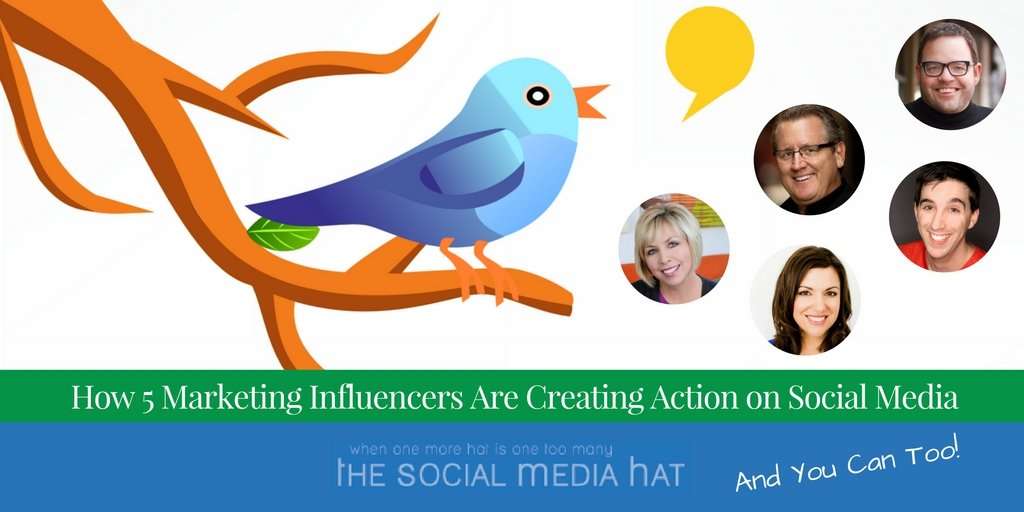 Are you in the social media industry?

Have you discovered there are a lot of people fighting for attention in this space yet?

If you’ve been in the social niche for any amount of time you will notice the throngs of people, marketers, and bloggers that are all struggling to make their brand known.

Some people make it, some don’t. That’s just the way it works out.

Wouldn’t it be nice to have the influence and marketing know-how to grab the attention of your target audience every time you shared something to social media?

There are some people that do.

I have researched the top 5 marketing influencers in the industry and they all have this marketing strategy in common.

First, let me introduce the marketing geniuses I have been watching:

What do all of these people have in common that makes their marketing on social media great?

They use psychology in their strategy.

Whether they realize it or not, they are successful because they have learned certain principles and they attach these powerful triggers to receive tremendous results on social media.

Let me show you how.

One Taps Into The Reptilian Brain

Jay is one of the best marketers I’ve seen to do this particular strategy.

Customer surveys are useless if you do them the WRONG way.https://t.co/vCT4n8HcUi #custserv pic.twitter.com/p1x9IpNn2B

What Did He Just Say?…I’m doing it WRONG??

The reptilian function in your brain is the attribute where you do things without thinking of them, like breathing, blinking your eyes, etc.

If you’ve been in the social media industry for awhile you might find yourself doing things over and over again and getting the same old results.

Jay is the best at this because he makes you think about what you’re doing, or going to be doing. For the people involved in customer service that have probably done this one hundred times or more, now they’re thinking Wait a minute, let me double check to see if I truly am doing this the correct way.

Bam! You just received a visitor on your website.

Are you beginning to see how important drafting psychological triggers into your social marketing is now?

Use Emotional Triggers in Word Play

Mark Schaefer is one of the best marketers I’ve seen to do this consistently. Mark is no slouch when it comes to building influence and driving traffic to his product and site.

Mark is a wordsmith Jedi and here’s why.

That’s the beauty of it.

This integrates the Law of 5 W’s.

The 5 W’s create a question in our brain that has to be answered because the solution is implicated in what we see. We know we are able to get the answer from how the poster has written with one of the 5 W’s.

When you connect these words in your blog titles or social media posts you are showing your audience that you have an answer to an important question or situation they may be facing at that point in time.

Curiosity is the name of the game in marketing. If your audience is curious about your blog content or product, then you have a great starting point.

But what about those people who don’t know who you are?

In the age of digital distraction, you have to stand out from the crowd and create something that makes people sit up and pay attention to you and your brand.One person comes to mind when it comes to impacting people’s curiosity – Kim Garst.

Ok, so I have to admit, I’ve already clicked this a while back. I mean, who wouldn’t want that much free engagement on Facebook?

The frontal lobe is a powerful area to attack in your marketing. As Dr Freeman and Dr. Watts explain, “…which acts as the accumulator of experience, the director of behavior, and the instigator of progress.”

Create a social post that tells the facts, builds trust, and shares your own experience and your audience will begin to understand how you do what you do successfully.

Kim is great at doing this, and, the best part about her is, she is down to earth and that also brings people to her doorstep on social.

It’s All in The Image Baby

“A picture is worth a thousand words.”

Honestly, this helps my blog because now I can write 500 words and put a great image up and count it as 1,500 words!

If you don’t care enough about your images to simply go to the first free photo site you come to and upload something to your blog, you’re telling your readers that you really don’t care.

Care about your images because it affects people on a powerful psychological level and there’s no better person to use in this example than Dustin W. Stout.

Have you seen #Twitter's new Dashboard? Here's everything you need to know: https://t.co/RIkE9DghZv pic.twitter.com/HSRT7QSVab

If there’s one thing which could take the championship belt it’s the fact that the image reigns supreme.

Aside from video, there’s nothing more powerful than a great image.

In fact, author Michael Forrester researched in his book Psychology of the Image the factors and trigger response an image has on an individual and his research suggests that when someone sees your image it is possible that you will have triggered something from their past that creates an emotional surge to their central nervous system, which, in turn, causes action.

Don’t make it too hard.

If you are writing about a pain point on Twitter, let’s say advertising, then you want to create an image that shares that pain point to your audience.

It will begin to unlock the struggle they can remember when they look at your image. Along with your title, this could show them you are about to solve all of their problems which come with doing this procedure.

Make it relatable and your audience will find the pain point in the image all by themselves, and that’s what makes it so powerful.

By far, Amy Porterfield has a monopoly on this specific strategy.

Does she pour over psychological research every day to figure out how to do this?

Probably not. This comes with experience in learning what makes your audience wake up and pay attention to you.

You could wait 5 years and learn this as you go, but this next step is helpful if you would rather just start doing it now.

There is something in your brain called reticular formation.

Let me explain this in terms that are simple.

Dan lives in Chicago by the “L-train”. He’s lived there for 5 years now.

When Dan goes to bed, after a couple of hours, around 2 a.m., the L-train comes booming through his neighborhood, rattling windows and dishes and blaring its horn.

Because Dan has lived there for so long, he doesn’t wake up when the train comes by his window anymore.

He has become “used” to the noise.

Later in his life, Dan marries and moves to the country.

He goes to bed and after he is asleep he immediately wakes up because he heard a creak in the kitchen.

Let me ask you this…

How can a man that has lived in the city with the L-train coming by his house every night, a man that can sleep through all of that, get woke up by a small noise in his country kitchen?

That is reticular formation.

All of those years that Dan lived beside of the train, after hearing the noise over and over, Dan’s brain deemed the noise irrelevant while he slept.

He became used to this sound.

However, the small creak in the kitchen wasn’t a sound that his brain was used to which immediately made him wake up from a sound sleep.

Are you creating noise?

There’s a difference in creating noise in which people deem irrelevant and creating a small sound that makes someone wake up and pay attention to you.

Are you saying the same things as everyone else?

The same is true for your social marketing.

In order to become successful, you need to understand what your audience needs… but don’t stop there, because there’s a good chance that a hundred other people have done the same thing.

Which brings me to believe that those one hundred are screaming in concert with each other and creating a noise that people aren’t listening to.

Go further than your competition and dig deep into your target audience.

Whatever it is, you have to do the homework in order to understand that while you still need to create noise, you don’t need to be creating the same noise as everyone else.

Learn these psychological principles and more!

I am pleased to announce that my friend Wade Harman has created a social media psychology community that focuses on psychological principles just like these for your social strategy!

There are discussion groups, ways to build your business and presence on social media, opportunities that will impact your small business and give you a “leg up” on the competition too.

One of the things I am most excited about is the community’s live social media psychology classes that are held every month where you are taught how to make these strategies possible for your brand on social media.

You are impacting your audience on a psychological level. Whether you know it or not, you are.

Wouldn’t it be nice to understand how to create these emotional triggers to create more action for your brand on social? Even better, wouldn’t it be awesome to have someone who was experienced in the art of marketing psychology to help you?

What are some of your strategies you have used successfully to bring people to action online? I would love to hear about them!