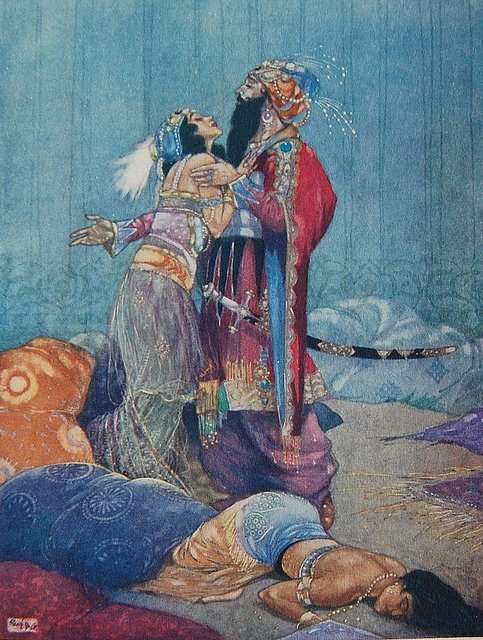 Sheherezade was a Persian Queen and the main character and storyteller in One Thousand and One Nights. In the story, the King marries a new virgin each day. The following morning, he marries a new girl and has the old wife beheaded, allegedly for being unfaithful. Sheherezade, the daughter of a vizier, wants to marry the King and become Queen, but of course she doesn’t want to get killed the next day, so she devises a clever strategy.

On the night of their marriage, Sheherezade arranges to have her sister nearby, who asks Sheherezade to tell her a story before going to bed. The King listens as Sheherezade paints an exciting and elaborate tale for her sister. Sheherezade had spent years studying histories, poems and stories, and it was said that she had collected a thousand books. She was able to tell her sister a story that lasted through the night, but stopped before the end, as dawn was approaching. The King, who had been fascinated, begged Sheherezade to finish the story, but she refused and promised to finish the tale that night. Rather than have her executed as he done every other girl before her, he allowed her to live another day.

Well, as you can probably guess, Sheherezade repeated the exercise that next night. She finished the first story, and then began a new one, even more exciting and interesting to the King, but stopped before dawn without finishing. Again, the King begged her to finish but again, she refused and lived to see another day.

This continued for one thousand and one nights, through one thousand stories, until Sheherezade told the King that she had no more stories to tell. By this time though, she had given the King three sons and he had fallen in love with her. Her stories had molded him into a kinder and wiser King and so he spared her life and made her Queen.

That is the power of a good story!

While the tale is an allegory, as bloggers and content marketers, we can take great lessons from Sheherezade.

It should be obvious that if Sheherezade had told a boring story on that first night, the King would not have listened at all and she would have been killed the next morning just like every other girl. Our readers are the same way! We can’t afford to tell boring stories. We have to be as interesting as possible, even if we think the subject matter itself is boring, in order to keep their attention.

Sheherezade survived because she was different. There were many girls before, and while the story is fiction, if we imagine it were true for a moment, think about why all these other girls might have chosen to try to be Queen? Each must have thought that she was better in some way than the others, but none were so different as to make an impression on the King. When you’re writing, if your content is the same as everyone else’s, why would your readers be interested in coming back for more?

Writers can define and look at being compelling in a lot of ways, but in this context, we’re talking about making readers want to come back for more. If you write a great article, but there’s no incentive for a reader to ever come back to your site to learn more, then what have you accomplished? There are a lot of different ways to achieve being compelling, but perhaps the best is to be consistent. Make sure that you’re regulary publishing great content, and your readers will learn to expect more great content from you in the future. They will bookmark your site, follow you on social networks and subscribe to your newsletter, giving you a growing and attentive audience.

Finally, it is your job as a blogger or content marketer to educate and inform your readers. While every single piece of content may not fall into this category as you may also work to Engage and Entertain sometimes in a way that does not Educate, the majority of your content should be helpful and informative. Sheherezade spent one thousand nights entertaining her King, but in the process, she also educated him. It is said that many of the books and stories she had learned and later recited were about previous Kings and rulers. So, she had a subtle, but profound, impact on her King and in the end, changed him.

When you are creating your content marketing strategy for your business, think about Sheherezade and how she worked every day to engage, educate and entertain her King, and treat your own audience accordingly.