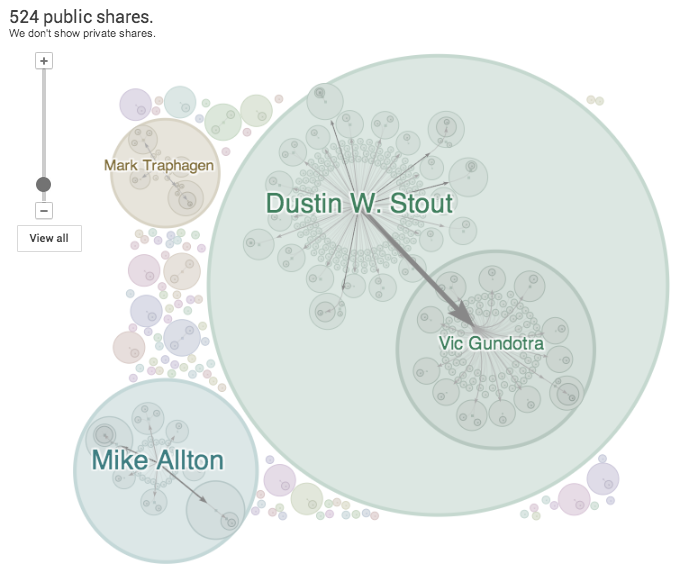 Monday, July 1, I achieved the most viral post I’ve ever had, to date.

It started the Friday before. For reasons passing understanding, I wasn’t able to sleep or relax so instead of lying down and watching some TV, I went back up to my office around 10pm. I didn’t intend to do any blogging, but when I glanced at my Google+ stream, I saw a post from a Google developer about their new badges. Once I took a look, I decided to create an article explaining what the new badges were and how to get them. That took about an hour to set up, and the plan was to share it Saturday morning.

After I was done with the bulk of the writing and was giving some thought to how I would handle some of the technical aspects of the post in the morning (it used some embedded scripts to display the new badges), I started to think about an entirely different topic. Someone had just created a post on Google+ and they notified me. I didn’t know them, had never asked to be notified of their new posts, yet they did it anyway. It occurred to me that many people do that, and other faux pas, completely by mistake. They’re not trying to be whatever, they’re just doing so through ignorance.

So I started to write, “How Not to Use Google+.” And I came up with nine things that people do that other people tend to dislike, to one degree or another.

Like many posts, if you can “list” something and outline your list from the start, the post will practically write itself. And this was no different. I’d opened a new Evernote note for the post and quickly had these various norms that some people weren’t aware of, and then went back and filled in what the incorrect behavior was, and how to best avoid that mistake.

So let’s review some of the “features” of this article:

I wrote it in approximately 30 minutes. Done for the night, I closed it out and didn’t revisit it until Monday morning.

So we’re back to the morning of the 1st. Being the first of the month and a Monday, I had lot going on first thing. Since this post still needed some editing and fine-tuning, I decided to hold off on sharing it. Also, I know that Monday mornings and Friday afternoons are poor times to share new content. Instead, I shared an infograph that I’d been asked to publish.

It wasn’t until after lunch that I had time to circle back and finish this post, so it wasn’t published until 1:30pm CST and it wasn’t shared to Google+ until 2pm. That’s when all the fun started.

First, I make sure that the post itself is as perfect as I can make it. In addition to the link preview, I always include a Title, Commentary, Hashtags and a Discussion Question. In this case, I had also given careful consideration to the imagery I wanted to use. I had found a picture of a crumbling foundation to use on the blog post, but actually made NO mention of the foundation metaphor within the post. I saved that for my Google+ post and drew from that for my commentary. 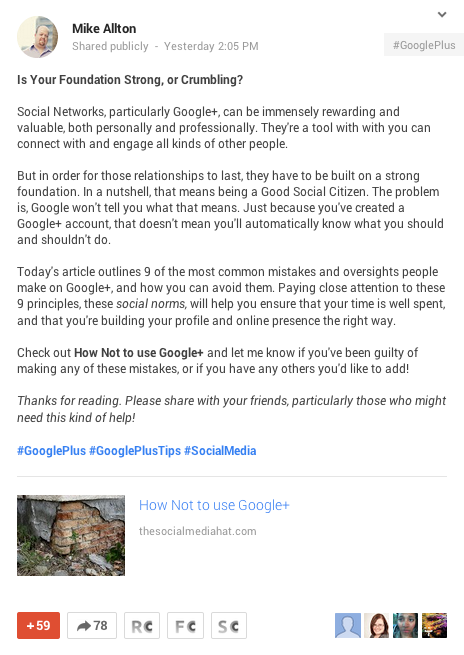 Second, before I share the post, I edit the Audience field to include both Public and my Blog Notification Circle. This is a circle comprised of people who have specifically asked to be notified anytime I share new content. There are currently over 100 people in the circle, and I select the box to send a notification so as soon as I share, the post is published in the stream and all of these people get a ring from Mr. Jingle.

Third, for my most important posts, I grab the URL of the post and head over to Empire Avenue to create a Mission. On EAve, you can create missions where you ask people to help you out in some way. In my case, I ask 10 – 20 of my friends to go and Share my Google+ post. They also often leave comments and +1 the post, but it’s the shares I’m after. More on why in a moment.

So thanks to my Blog Notification circle, one of my friends and colleagues on Google+, +Dustin W. Stout, saw the post and enjoyed it so much he decided to share it. Dustin actually did a really cool thing here. Not only did he share the post for me, but he also decided to create his own share from my article, rather than just sharing my Google+ post. When he did that, he created his own shortened bit.ly link which allowed him to track how many times that link was clicked. Between activity on his post, and monitoring the click-throughs on his link, Dustin was about to be in for a busy day. 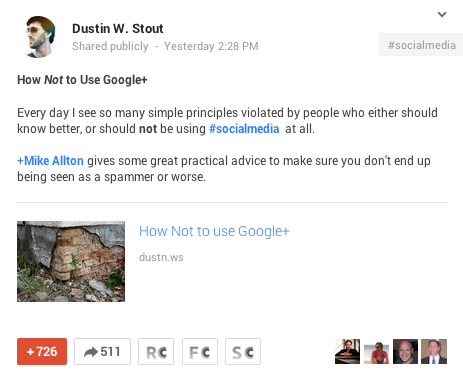 Within the hour, both Dustin’s and my original post were trending on Google+.

The second big share that took place was from +Vic Gundotra. Vic is the Senior Vice President of Engineering at Google. He is essentially in charge of the Google+ project. He saw Dustin’s post and shared it, writing, “Really good tips and worth reading. These are obvious for most of you.” 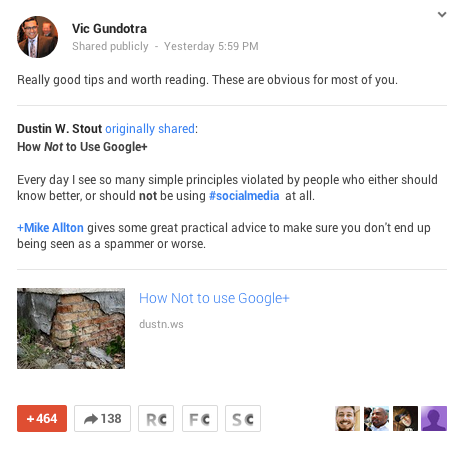 As a result, this blog post actually had three entries within Google+’s “What’s Hot” discovery tab: mine, Dustin’s and Vic’s. “What’s Hot” contains posts that Google+ think are interesting or relevant, and are shown within users streams, regardless of whether or not they follow you. So getting on What’s Hot is a pretty big deal when you’re trying to bring more visibility to your content. Getting the same post into What’s Hot from three different people is quite remarkable.

For a post to land on What’s Hot, it requires a number of things: +1’s, Comments and Shares. These are what we refer to as Social Signals, and they’re listed in increasing importance. So the number of social signals is important, but also the timing. The faster they come in, the more likely the post will get on What’s Hot. Other factors like the author, the topic, and the author’s post history seem to play a role as well. The rapid +1’s from my Blog Notification list, the immediate shares from my Empire Avenue mission, and then the additional shares by key influencers led to the posts getting recommended and achieving viral status.

This, in turn, led to tremendous activity and interest in the post on all three of these shares, and quite a few others. As you can see by the Google+ Ripple diagram, +Mark Traphagen joined Dustin and Vic and I to produce a large and rapid number of shares, with Dustin’s post actually getting the most engagement of all of us.

If you’ve never looked at Ripples before, it’s worth learning, particularly if you want to be able to find out how a post spread like this. Simple go to your Google+ post and click on the upper right hand menu for that post and select Ripples. Google+ will show you every share of that URL, so even though Mark went to my blog post and shared it himself, I still see it. In fact, all those little circles between the larger circles are instances where someone shared the post to Google+ directly from the article. If you’d like to learn more about how to use Ripples, click here.

This particular post continued to run strong for 24 hours. Most of the discussion and shares took place within the first 12 hours, but traffic continued well into the second day. By the end of the second day, this is what the numbers looked like for that article:

It should also be noted that the article was very popular on Twitter as well, with over 300 tweets and many more retweets.

While these numbers may not rise to the level of popular YouTube videos, they are still impressive for many businesses, and represented the highest single day totals The Social Media Hat has ever seen in it’s nine month existence. So what did we learn?

Obviously, even if you do all of these things every time, there’s no guarantee that your post will go viral, or even get on What’s Hot. However, if you do these things consistently, you stand a much stronger chance of finding your content suddenly getting shared and discussed all over Google+.

Please share your thoughts and comments below. If you would like help with Google+ and understanding how to leverage the power of content marketing and social media to help drive traffic to your site, generate leads and convert those leads in sales, please contact me.

Previous Post: « Generating Engagement and Outreach Opportunities from LinkedIn Groups
Next Post: Qualitative Market Research and How It can be Used to Defend Your Brand »