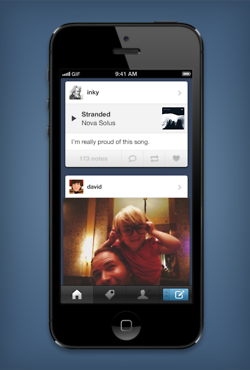 Tumblr, the microblogging social network, has released version 3.2 for iPhone that has been competely redesigned for iOS, making it faster, smoother and more responsive. The upgrade was announced in their blog post today. Among the improvements are:

– New blog screens with with blog portraits and descriptions.

– GIF images which are usually animated will now play automatically on the dashboard and can even be viewed frame by frame.

– Users can swipe on any screen to go back to the previous view, and long tap photos, links, tags and post headers to see more options.

Social networks like Tumblr have seen their own data, and the popularity of newcomers Instagram and Pinterest, and realized that social media content now revolves around images, so improving support for and usage of photos for users is critical. Just last week, Facebook updated their app to allow for better mobile photo support, and we expect the other social networks to follow suit.

Tumblr just recently redesigned their entire interface. What do you think of the new app? Are you a Tumblr user? Do you use the microblog for personal or business updates, or both?