I’m Getting Far More Pinterest Traffic Because of Pinwoot, and You Can Too

Reading Time: 7 minutes Over the past four months, I have seen my referral traffic from Pinterest go up by approximately 50%, every month, and that will continue to increase, mostly thanks to the tool Pinwoot.

You are here: Home / Social Media Tools / I’m Getting Far More Pinterest Traffic Because of Pinwoot, and You Can Too
Reading Time: 7 minutes

Over the past four months, I have seen my referral traffic from Pinterest go up by approximately 50%, every month. This month, I will be approaching 1000 visitors to my blog posts from Pinterest, and there’s every indication that this traffic will continue to rise. There are several reasons for this, but none of them have to do with more followers. There’s a tool that I’ve been using that has helped tremendously, but before I get into it, I want to share with you a few other adjustments and tweaks I’ve made to my Pinterest strategy recently which may have contributed.

First, several months ago, as part of my renewed interest in Pinterest, I took the time to reorganize all of my boards. I created a number of new boards for both personal and professional interest, and I took several boards and broke them up into more focused boards. For instance, instead of one “Social Media” board, I created specific boards for “Google+ Resources,” “Pinterest Resources,” and so on. I also put my most important boards at the top. 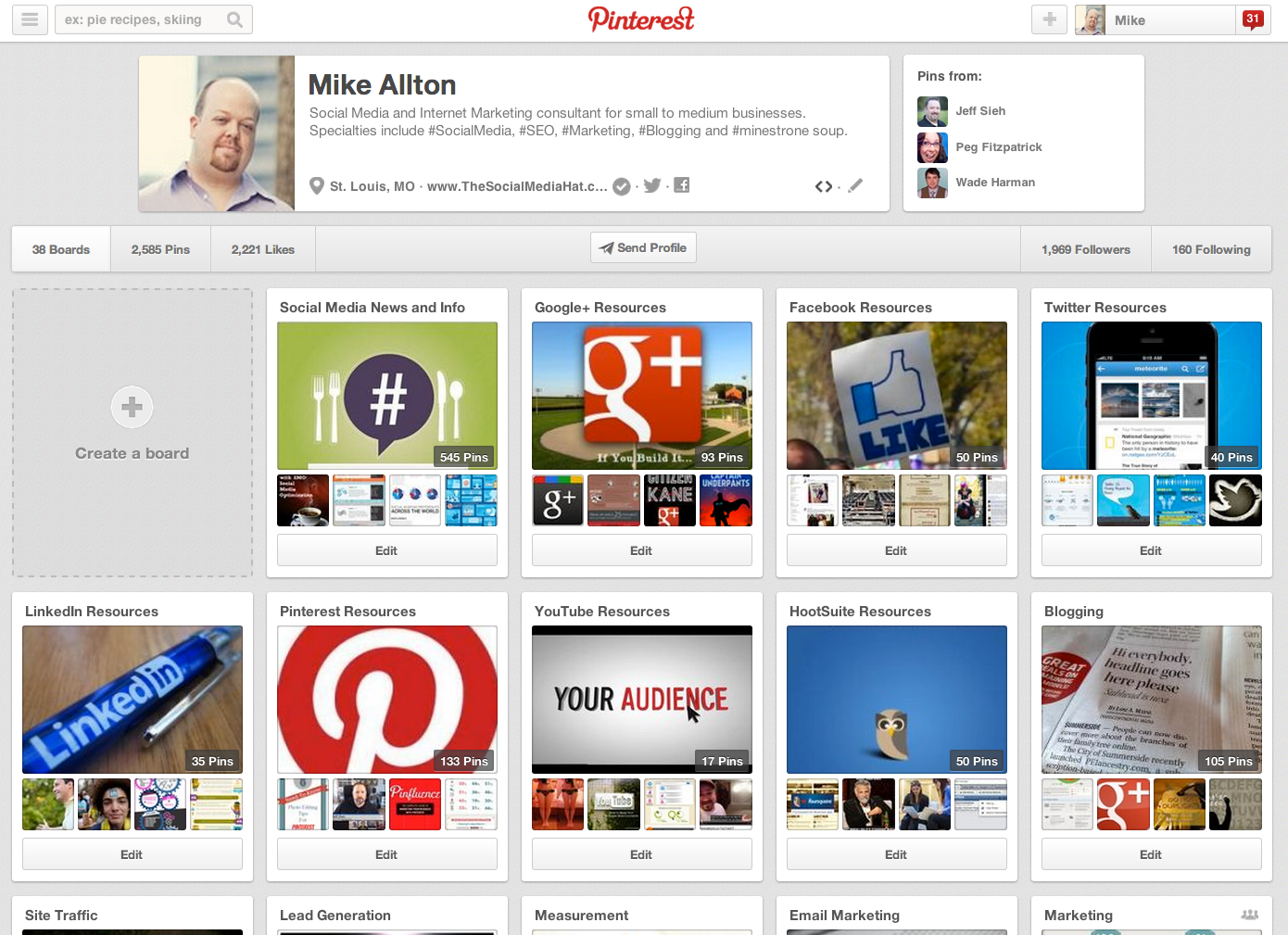 I also made it a point to open my Pinterest app at least twice a day. I will review notifications and make sure I’ve responded to comments, and look for more pins I can place in my boards. I curate articles and graphics that other people will find helpful on the topics I normally talk about, as well as personal pins for things like places I want to someday visit. I will pin a few pins and like a few more.

Starting last Fall, I began to make a concerted effort to improve the quality of the images I used in blog posts, specifically optimizing them for Pinterest and Google+. In part that means using higher quality imagery and trying to utilize images that are portrait in format – ideally 600×900. But more importantly, it means making sure that every image you pin has text on the image that describes what the article is about. Most people using Pinterest are sifting through images and only tapping on the ones that grab their attention, which means that it doesn’t matter what the title of your article is or the description of the pin – it’s the image itself that must convey the purpose of the post. If all I shared was an image of a crumbling foundation, you’d have no idea it was an article about what not to do on Google+.

EDITOR’S NOTE: The rest of the original article explained how I used a product formerly known as Pinwoot to further grow my Pinterest audience. That product has changed names and focus over the years, and is no longer recommended. Instead, I strongly advise you to read about Tailwind and Tailwind Tribes, which is far more effective. Tailwind is also an official Pinterest Partner which means that everything they do is safe and can be trusted.

One of the most effective tools and techniques that I’ve found recently, thanks to +Jeff Sieh, is called Pinwoot. If you’re familiar with Triberr or JustRetweet, you’ll get how this tool works right away, but in case you aren’t, here’s an overview:

UPDATE: Pinwoot is now Viralwoot! Other than changing the name and domain, most everything else is the same. Links within this post have been updated accordingly.

Once you’ve joined Pinwoot Viralwoot, you can accumulate seeds by following users that you’re interested and repinning pins that you’re interested in pinning. Or, if you don’t have much time, you can purchase seeds very inexpensively. After you accrue a nice collection of seeds, you can begin to promote some of your own pins. What you’re essentially offering to do is give other people seeds in exchange for repinning your pins.

Getting Started with Pinwoot Viralwoot

If you haven’t yet created an account, start there. Go to Pinwoot.com and use the Login with Facebook option or just put in your email and a password in the Register form. The next step is to connect your Pinterest account so that Pinwoot Viralwoot will be able to see your boards and allow you to follow people and repin pins right from Pinwoot Viralwoot.

When you’re ready, click on Promote Pins. This will take you to a screen that allows you to see any pins you’ve promoted in the past, and has a field at the top where you can enter a URL for a new pin to promote.

To get a pin URL, open your Pinterest account and navigate to the pin you want to promote. Click on the URL in your browser address bar and Copy it, then Paste it into this field on Pinwoot Viralwoot. It currently costs 45 seeds to add a new promoted pin, and the default setting is 5 seeds per repin.

That’s it. Wait a moment, and your new pin will show up below, among any others you’ve promoted in the past. You can see how many repins and likes your pins have received, as well as start and stop promotions for specific pins. You can also permanently delete pins from your dashboard.

If you’re interested in gaining new followers on Pinterest, you can certainly use Pinwoot Viralwoot for that purpose, but I’m not. I prefer that people only follow me if they’re interested in what I’m pinning and want to learn more about blogging, social media and marketing. So, I have reduced the amount of seeds I offer new followers to the minimum number of seeds. Because I have paid for seeds rather than spend a lot of time pinning random pins, I am given the option to reduce my seeds per follower offer down to 0.

Should you pay for seeds? I thought that buying 1000 seeds for just $29 was a fantastic deal. I could spend a lot of time following or pinning, but I’d rather view my activity as a marketing investment. Much like sponsoring a Facebook story or promoting a Triberr post, the investment should be viewed as a mechanism to increase the reach of your post and give more people an opportunity to see it and pin it if they’re interested.

To date, I have received 169 new followers, 298 repins and 172 pin likes thanks to Pinwoot Viralwoot. Make sure that you’re providing real value in your pins and Pinterest boards, and then give Pinwoot Viralwoot a try and see how much you can expand your reach on Pinterest and start gaining more traffic.

“Pinwoot is a very flexible in terms of what you want to extract out it. So, when you start using Pinwoot – have some goals in your mind like, ‘I want more followers’ or, ‘I want more repins & I am not interesting in getting followers.’ Once you have goals set, update how many seeds you want to offer for getting closer to that goal.”

Alexander went on to suggest the following three tips:

1. Focus on size of image – make sure it is 600px in width and height is more than 1.3 times the width. We ran some experiments with effects of image size on Pinterest search & performance, and found that images with 600px or more width do well.

2. Focus on the right time to pin – Usually, our data shows that noon & late night are the best periods to pin. You can find the best time to pin by analyzing your traffic data.

I also took a moment to talk to Alexander about where they’re going with Pinwoot Viralwoot, and any specific plans they might have in the works, and he did not disappoint. He said that their “vision is to help tens of thousands of creative individuals, small businesses & entrepreneurs, artists and bloggers to get discovered, get more visibility and more importantly, play a useful role in growing their blog/store traffic & sales.”

And he went on to reveal three big changes that are right around the corner for Pinwoot Viralwoot:

1. We are revamping the entire Pinwoot site and expect to launch this month (screenshots below).

2. We are working on a feature to allow users to upload images for scheduling posts.

3. We recently launched a product called StoreWoot, which is doing great. Hence, we will continue to build products to cater to specific niches. At present, we are building two new products, one of them is a dead simple & cost effective social media scheduler for FB, Twitter and Pinterest with analytics.

So stay tuned for more news and updates about the Pinwoot Viralwoot platform!

UPDATE: The new interface did in fact Go Live and is great. A review and updated How To’s will be published soon.

One recent addition to my Pinterest Armory is Rich Article Pins. Over the holidays I upgraded The Social Media Hat to the latest version of Drupal, and that included being able to use the latest module for Meta Tags. This brought full Open Graph tag capability to my posts, and the capability to support Twitter Cards and Rich Pins. After configuring, testing and applying, The Social Media Hat was approved for both. This means that every time anyone pins an article from the site to Pinterest, far more information is included (and ALL prior pins were automatically updated as well!). 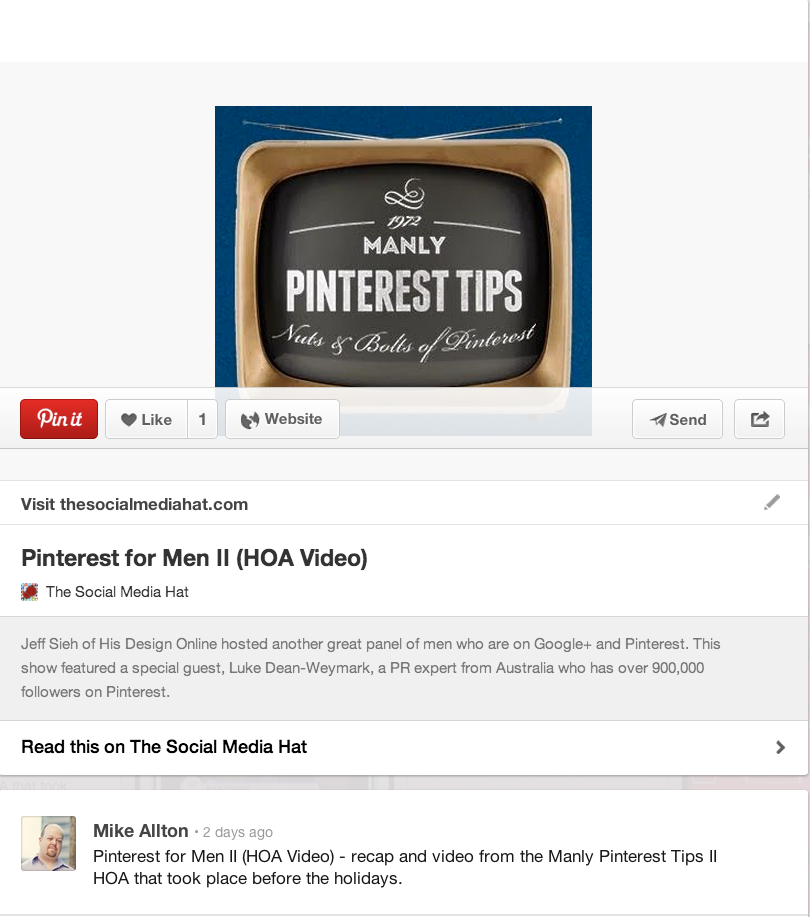 This capability will only continue to help me expand the reach of my audience on Pinterest and garner more interest in the articles being pinned.

If you’re blogging on a regular basis, or have products for sale, Pinterest needs to be an integral part of your social media strategy in 2014. The good news is, the platform won’t demand much of your time on a day-to-day basis. If you’d like to schedule a one-hour strategy session and Q&A on how to build Pinterest into your marketing and blogging, contact me.

Disclosure: Links to Pinwoot included in the post are affiliate links. Pinwoot’s affiliate program rewards referrals with more seeds only. By clicking on one of these links and creating an account, I gain a few more seeds only. Pinwoot does not pay for referrals, nor was this post sponsored.