This article will discuss some of the (free) best-practices you can use to combat a decreasing organic reach. I’ll then get into some of the ways I’ve seen Facebook Ads used successfully. And by the end, hopefully, you’ll be able to make your own fully-informed decision about Facebook advertising.

You are here: Home / Social Media Articles / Why you Should Opt into Facebook Ads
Reading Time: 5 minutes 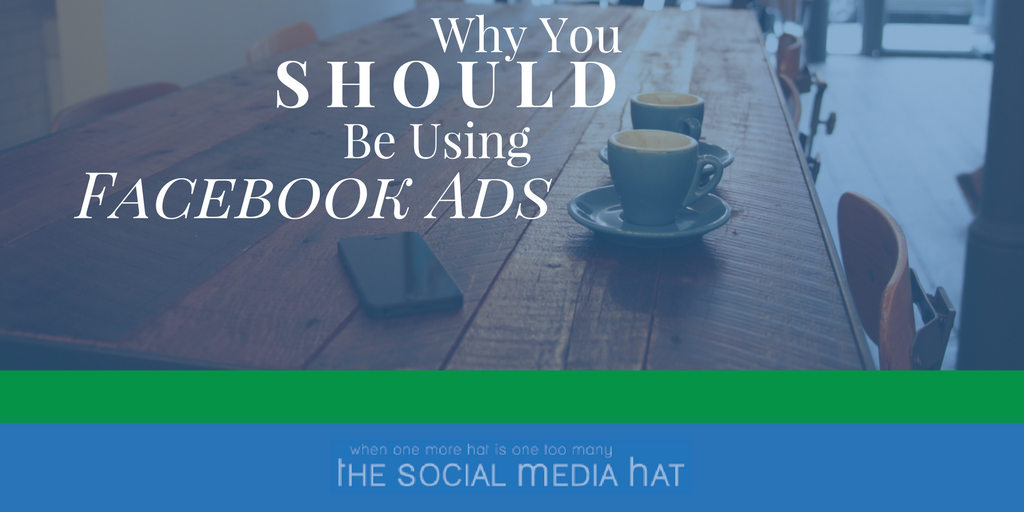 One of the most popular articles on TheSocialMediaHat in 2013 was entitled ‘Why You Should Opt Out of Facebook Ads’. I thought it worth taking another look for 2014. Yes, that article was written by Mr. Mike Allton himself, so this may be the worst guest contribution idea imaginable.

But let’s give it a go anyway.

This article will discuss some of the (free) best-practices you can use to combat a decreasing organic reach. I’ll then get into some of the ways I’ve seen Facebook Ads used successfully. And by the end, hopefully, you’ll be able to make your own fully-informed decision about Facebook advertising.

EDITOR’S NOTE: I was happy to accept this rebuttal from James and have published it entirely intact.

Mike quoted his Facebook organic reach in December at 4%. Out of more than 1,200 Facebook Fans he was reaching 50 of them. Yes, this is miserable.

While his number is a bit lower than what most people are seeing, it’s not unheard of. Most sources agree that average organic reach dropped about 40% with the Edgerank changes in August and December, from 16% to about 7%.

However, you should strive to be above average. And there are ways to do so. One of them (sorry Mike) is to ensure your Facebook Post is shorter than the 894 characters he wrote out in the example competition between his Facebook Post and his Google+ Post.

Studies have shown that keeping your Post length to around (or even less than) 100 characters is Facebook posting best practice.

Top Tip: As of January 24th, Facebook has created a ‘Pages to Watch’ tool within Facebook Insights. For businesses with between 100 and 10,000 Fans, ‘Pages to Watch’ allows you to see the performance of your competitor’s Facebook Pages. You can see their page’s engagement, number of posts, and overall profile increase week-on-week. While they do receive a notification that someone has added their Page as a ‘Page to Watch’, they won’t see your name.

Additional Reading: The Facebook Hack That Will 10x Your Reach

There are a couple of primary ways in which Facebook Ads can work for your business.

(Of course there are more… General targeting techniques such as custom audience targeting and precise and broad-category interest targeting for instance, can hugely increase your click-through rates – arguably making them competitive with Google Adwords.)

But the two I talk about below are the ones that I really feel can benefit your business substantially, provided you understand how they work.

One of the most successful ways to increase your brand’s Facebook profile is to create a Facebook Ad that promotes a Facebook-exclusive offer or contest and then ‘Like-Gate’ the offer.

Something like this (pretend this was for an E-commerce business that sells sunglasses instead of Wishpond, otherwise that picture is totally random): 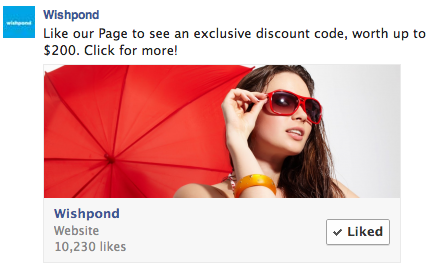 Now, in order to create a ‘Like-Gated’ tab on your Facebook Page (on which you allow people to enter to win), you need to contact a 3rd party provider. This is because Facebook Brand Pages can’t be hidden from the general public without access to the Facebook API (don’t worry, you don’t have to know what that is, just trust me). There are many of these 3rd party providers – shop around and find the one with the right service and price for your business.

Like-Gates ensure that the Facebook users who want access to your awesome offer or contest prize have to Like your Page before they can get it. I recommend you offer a prize related to your business, rather than an iPad or cash, as (though you will definitely generate Likes) those users won’t be genuinely interested in your business and are likely to unsubscribe or un-Like you once the contest is over, and will definitely not convert to a sale.

Target this ad at friends-of-fans, a lookalike audience (see below) or by precise interest based on your service and product. Ensure the Facebook users that see it aren’t already your fans, otherwise you’re wasting paid reach.

Increasing the total number of people who Like your business on Facebook is a great way to combat the decrease in organic reach. 7% of 100,000 is somewhere near 10 times 7% of 10,000. (Math was never my forte).

Facebook’s Ad tool allows you to import your business’ customer list. Facebook then takes that list and finds the corresponding Facebook user. Now, contacting this list with a paid ad probably, realistically, won’t return a better ROI than your email marketing strategy, so I won’t wax on about how amazing it is.

Basically Facebook takes all the known characteristics about your custom audience and finds other Facebook users with those characteristics. Let’s say your merchant list (and therefore your custom audience) is made up of primarily small-business owners in the United States; 55% male, 45% female; 75% over the age of 40; average income around 55k; shared precise interests are online marketing, networking, social media, email marketing and classical movies; 70% of them have children 5-18 years old…. The list goes on.

Facebook finds users with these characteristics (a list the same size as the one you input), and you can target them with a Facebook Ad. Maybe you sent a marketing email out to your merchants that performed really well (great open-rate, solid conversions, etc). How about you create a Facebook Ad with a similar design, similar wording, and the same offer. Target this ad at your lookalike audience and generate traffic to an optimized lead-generating landing page.

Let’s do the math on this one:

Each lead you’ve obtained is already half-nurtured, as you know they’re similar to your merchants. You also know, depending on your lead-generating tool (an email-gated ebook or offer, for instance) what part of your service or tool they’re interested in – hugely increasing the efficacy of email marketing.

Each lead is also demographically relevant to your business. Every lead you get from a Facebook Ad is based in the location your merchants are. This means you’re not generating random leads from the ends of the earth, as can be the case with Google Adwords.

Top Tip: There’s a delicate balance, in Facebook Ads, to target your Facebook Ad at a large enough audience that you’ll receive enough clicks for a reasonable ROI, but not so large an audience that you aren’t generating legitimate traffic. If your current merchant list isn’t large enough to result in enough ad clicks, try adding precise interest or broad category (job title, for instance) into the mix.

Last week I had a conversation with a content curation service offering to use my own content for me, show it to their readers, and I’d only have to pay 50 dollars per lead. I politely declined.

How much are you paying? If it’s less than 2 dollars then there’s no reason for you to try lead generation through Facebook Ads.

However, if you are, Facebook Ads are worth a try, provided you’ve done your research.

Facebook is still the most dominant social media platform. In the past 3 years the 55+ age group has gone up 80.4% (yes, that’s the age group with money). The average Facebook Ad CTR has increased 275% since 2012 and ROI increased 152%.

I’m not saying that Google+ isn’t an awesome platform though, Mike. It absolutely is.

But I, for one, am not, quite yet, opting out of this money pit.

What do you think? I’d love to hear your opinions. Start the conversation below

James Scherer is content manager for the Wishpond Blog. Wishpond offers a free website popup builder, enabling your business to create list-building and promotional tools of all kinds. Connect with James on Twitter.