Google Plus App Updated For Community Managers And More

Reading Time: 2 minutes One of the features that Google+ has recently given Community Managers is the ability to pin posts to the top of the community stream, and now that capability has been added to both iOS and Android device apps. 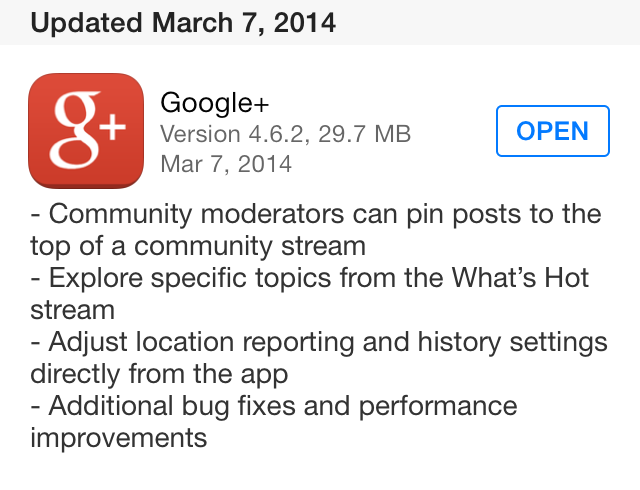 One of the features that Google+ has recently given Community Managers is the ability to pin posts to the top of the community stream, and now that capability has been added to both iOS and Android device apps. By pinning a post, the manager can ensure that visitors to the community see that post first, but of course what post and how it’s used can be very creative.

Being able to control what is or is not pinned from your mobile app brings a great degree of convenience and flexibilty to the feature.

To pin or unpin a post, simply open the Community on your mobile app and tap on the post. In the upper right corner, tap on the gear icon and choose to Pin It (or Unpin It) as needed.

Other Changes for Google+ For Android

Last week when the update for Android was released, it also integrated the photo editing tool Snapseed into the Google+ app, bringing photo editing features and filters that were previously only available via desktop.

Other Changes for Google+ for iOS

And this week, with the update for iOS, iPhone and iPad users get to explore specific topics within the What’s Hot stream, as well as adjust their location reporting and history settings directly from the app.

One other Easter egg I noticed was that within the iOS app for Google+, to the left of the notifications bell icon, there’s a new icon that looks like a couple of people. Tapping on it brings up the Google+ people recommendations list – people you may know or who Google+ thinks you may know. Each individual is listed with their name, profie pic, a number of people who you may be following in common, and easy buttons to add them to a circle or remove them from the recommendations list.

Check out the upgraded app and let me know what you think!

Previous Post: « Why Linkbait Is Not The Evil Viper You Think It Is (And How To Use It To Gain Traffic)
Next Post: How to Save Google Plus Posts for Later Reading »