Reading Time: 6 minutes What do you do when plans don’t go your way?

Early on the morning of May 10, 1940, the pre-dawn sky above The Hague was suddenly littered with black spots. German Paratroopers were deployed throughout Belgium to pave the way for a full assault from German forces. Within hours, the Germans had destroyed over half of Belgium’s aircraft, achieving almost instantaneous air superiority. When French and British forces rushed to respond, they were pulled out of position and quickly overmatched.

Within days, Germany fully occupied Belgium, Netherlands and Luxembourg, and had cut off the French First Army, the Belgium Army, and the British Expeditionary Force (BEF) which numbered 390,000 soldiers, plus enough equipment to power eight divisions. As the German forces raced across northern France, the allied troops found themselves trapped along the coast, separated from the rest of the French Army far to the south.

It was a military disaster. Allied commanders had relied too heavily on antiquated defenses and were woefully unprepared for the efficiency of the Axis assault.

In addition to losing control over territories, the Allies faced the prospect of losing over 400,000 troops. When German forces reached the coast of France on May 20, they turned north and proceeded to destroy every port and ship capable of transporting troops across the channel to Britain. The military rout was about to become a massacre.

Have you ever had plans fail so spectacularly, it left you panicked and at a complete loss as to what to do next?

Doubtless you’ve never faced quite so perilous a situation as the Allied forces above. Yet failure of any kind is still failure. It stings

Last week I talked about the Social Pulse Summit that’s coming up on Wednesday, and I shared what my long term vision is for that event and the community we’re building around it. What I didn’t share was how stressed I’ve been about it.

As the days turned into weeks for which registration was open, I kept waiting for the moment when registrations started pouring in. And that moment hasn’t come. Sure, there are lots of people signed up for the summit, and the event itself is going to be great, but the one yardstick upon which I’m measured and holding myself accountable is attendance, and by that measure, I’ve failed. We’re currently at just 35% of our projected attendance, and will likely only get to 60% by the time registration closes in late December.

That’s not OK for me.

When it comes to work, I’m what you might call an over-achiever. Success is extremely important to me and if that means working nights and weekends, calling in favors, or even taking unorthodox approaches, I’m all in.

As registrations languished this week, I sent emails to speakers and sponsors encouraging them to share with their communities. I sent a special email to you and the rest of my subscribers. I wrote new blog posts that’ll be published, worked with my ads team on new approaches, and even promoted the entire event on Product Hunt. (You, ah, might have seen an email about that, too.)

Yet despite all of that, people just weren’t responding at the rate we expected. By the end of the week, we actually pulled our paid media to stop spending at such a high rate. People were signing up, but it was costing us 5x more than it has for past events.

Of course I want and need to know why, and my first fear was that it was me, us, the event, the topic… something at its core personal and profound. I suspected perhaps it was because Twitter as a platform isn’t the most popular or interesting, and that led to a concern that I had made a critical mistake in selecting that platform as the focus of this particular event. Like the French thinking that their Maginot Line would hold the Germans off.

The reality, certainly, is far more complicated. A focus on a more popular and compelling platform like Instagram might have helped, but the event has been handicapped by the global pandemic and the severe distraction of U.S. Elections. Other recent event organizers that I’ve talked to have experienced similarly lackluster responses. It’s somewhat comforting to know that it’s not “just me” but that fails to help the business bottom line.

What would you do? How would you react to a situation where you knew it to be hopeless, yet hope is all you have to cling to?

On May 25, 1940, after being in office for barely two weeks, British PM Churchill made the decision to abandon France and Europe to the Germans. Just six months earlier, Britain and France had dismissed Germany’s proposal for peace (which would have left them control over Poland and time to further arm themselves for war with Russia), and now found themselves staring defeat in the face. But, abandoning France didn’t have to mean abandoning the 390,000 British troops, and tens of thousands of French infantry, trapped along the coast.

If you’ve seen the brilliant and dramatic film Dunkirk, you know what happens next.

A little sea town of Dunkirk had a port that was barely serviceable, and miles of beaches that were too shallow to bring ships in to pick up the masses of troops piling up. While German artillery drew closer and closer, and German airplanes routinely bombed and strafed ships and men alike, Captain Tennant of the British Royal Navy made clever use of the moles – sea walls stretching out into the water – as embarking points for soldiers. Aided by countless private vessels – fishing trawlers and ferries and yachts that came over from as far away as the Isle of Man and Glasgow – the crews rushed to move hundreds of thousands of soldiers off those deadly beaches and over to the save havens of waiting ships and, Dover, beyond.

That day, in face of unfathomable losses and impending doom, “Dunkirk Joe” rallied his men and volunteers, and saved over 300,000 souls. Soldiers would go on to fight and fuel the war efforts for years to come, including tens of thousands of French soldiers who were rescued off that beach and returned home to fight in southern France just hours later.

In the coming days, more people will come to learn about Social Pulse Summit and be interested in learning more about Twitter and from those wonderful speakers, so we’ll gain more registrants. Yet I know now that it is impossible for me to achieve my initial goal. No amount of effort or money is going to overcome the malaise that still rests on the minds of everyone we were hoping to reach, so instead, I’ve determined a new goal, one that will serve me well for this event and still support my future events and future goals.

Social Pulse Summit will be the most educational and engaging event any of those attendees have been to this year.

Attendees like you will learn about Twitter, of course, and how to leverage that platform for their business, but you’re also going to learn about personal branding from Goldie Chan, about crafting a terrific digital presence from Chris Brogan, and interestingly, you’re going to learn from Jay Acunzo what to do when Plan A fails. Boy, that sounds like advice we all need right now, right?

But it won’t be me making this event a success, it’ll be the energy and enthusiasm that you and Debra and Madalyn bring. It’ll be Jessika and Troy and Tricia and hundreds of other speakers and attendees alike, joining together in live chats and table talks, panels and discussions. The Dunkirk Spirit of community with folks banding together to help each other.

I hope to see you Wednesday in the Community. http://thesmh.co/SPS-Twitter

Opportunities to learn and train

Instead of focusing on only the immediate buyers and sellers, Jenn Herman will teach you how to keep your audience active and engaged at all stages of their journey, including while they’re happy home owners, so that when they ARE ready to move on, you’re the first person they reach out to. https://instagramforrealtors.jennstrends.com/

Find the right Instagram influencers for your goals? Check! But what else do you need to know about advertising with influencers?  Learn more from Neal Schaffer: https://www.agorapulse.com/blog/instagram-influencers-strategy/

Instagram Trust Score: What It Is and How to Improve It

Every action you take on Instagram affects your Instagram Trust Score. Which actions hurt your score and which actions improve it? Learn more from Shane Barker: https://www.thesocialmediahat.com/blog/instagram-trust-score-what-it-is-and-how-to-improve-it/

I thought this would be a good opportunity to share with you what I’ve been working on at Agorapulse: a new Partner Program. This amped-up affiliate program is by invitation only and available exclusively for social media content creators. I provide increased, recurring commissions on referrals, insider-information, and co-marketing opportunities. For instance, next month we’re focusing on Agorapulse’s hot new feature, Power Reports, and will be putting co-marketing dollars into promoting partner-created content that features, well, this feature. Hit reply if this is something you’d be interested in!

Laughs and other galactic entertainment

In 1914, during the first World War, a bitingly cold Christmas Day dawned and found soldiers from both sides of the 500-mile long Western Front climbing out of trenches and wandering across no man’s land to shake hands, sing carols, and enjoy some of the finest champagne available, Veuve Clicquot. When we wanted to celebrate our 10th wedding anniversary (10/30), my wife’s birthday (11/4), and the end of a divisive national election (11/3), that’s what I opened. 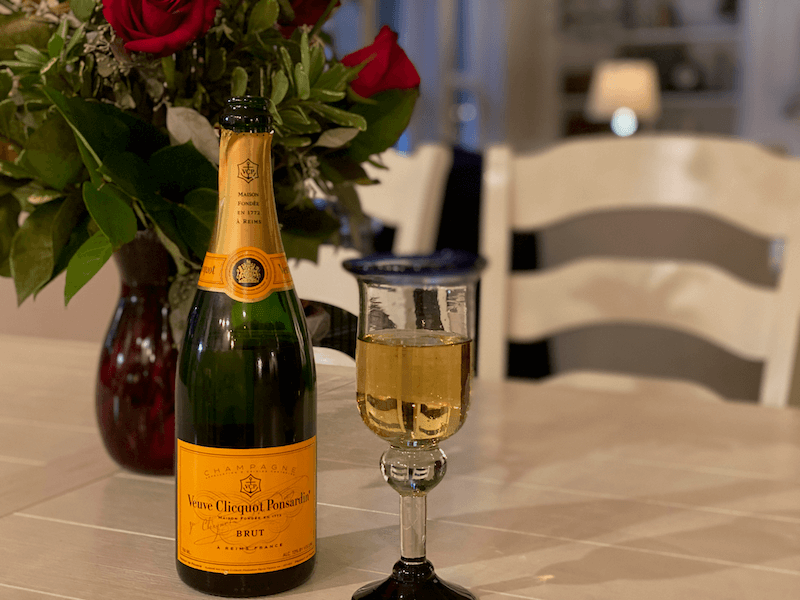 Trinkets and spare parts that might be just what you needed

What am I talking about?! The 360 Marketing Squad, of course!

Yes, it really is just $5 a month and yes, you really do get access to training, materials and the brilliant minds of four expert marketers. Jenn Herman, Stephanie Liu, Amanda Robinson and myself! Click here to sign up: https://360marketingsquad.com/