You Can Grow Your Email List Using LinkedIn, But Not This Way!

LinkedIn offers an incredibly easy way to move your LinkedIn Connections into your email client, or even an email marketing software like MailChimp. But should you? What are the alternatives?

You are here: Home / Social Media Articles / You Can Grow Your Email List Using LinkedIn, But Not This Way!
Reading Time: 5 minutes 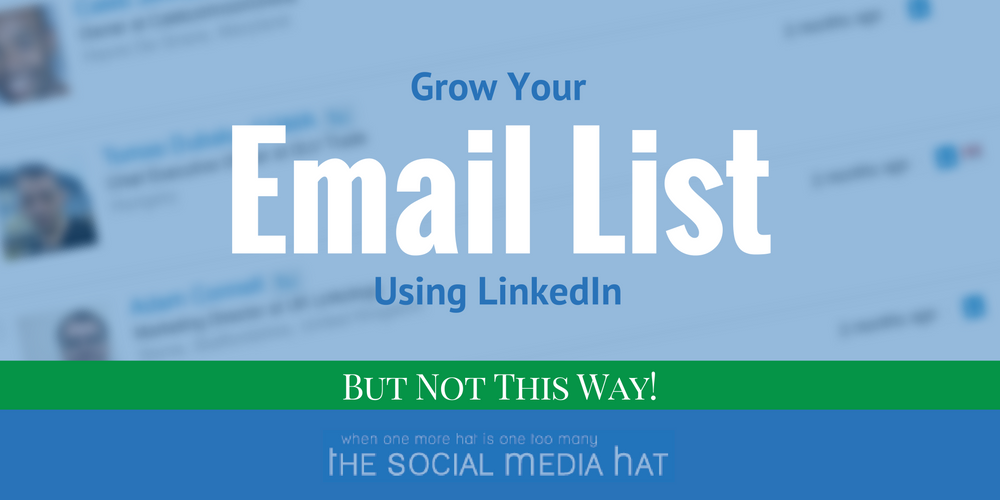 One of the ways that I’ve seen people grow their email lists, particularly recently, is to use LinkedIn’s Connections Export feature to generate a file listing all of the contact names and email addresses, and then upload that into their email marketing solution, like MailChimp.

It’s relatively straightforward. You log into your account, go to My Network -> Connections, and then look for the gear icon in the upper right of the list.

Here, you can monitor apps that you’ve synced with, import connections from your email services, and also export your entire set of connections. Click on Export LinkedIn Connections in the right sidebar. Select the format you wish to use, and then download the file. It likely doesn’t matter which “format” you choose so long as you get a CSV file in the end, can simply delete all of the columns save for First Name, Last Name and Email.

Now, as you may have guessed, I’m writing this article because I don’t want you to take this list of contacts and import them into MailChimp. That would be unethical and potentially illegal. So why did I just tell you essentially how to do it?

Because, like so many other tools (Auto DMs, anyone?), the tool itself isn’t the issue. It’s how it’s used.

We’ll circle back in a moment on how to use this list. But first, let’s make sure we’re on the same page with regard to why it’s not a good idea to import addresses into MailChimp.

Since you’ve read this far, I’m going to assume that you have an email list that you want to grow, and also that you’re using LinkedIn to connect with other people. Both of those things are certainly positive tactics for your business, therefore so far so good.

Hopefully you’re using your email list to continue providing value to your audience and further your relationship with those people.

And hopefully, you’re using LinkedIn to connect with people in and around your industry, peers and colleagues as well as prospects, to engage with them on that platform.

So I can see how it would be appealing to simply move all of those connections over to email.

But the fact is, people do not connect with us on social media to be subsequently sucked into our email marketing. That’s a step forward in your relationship that you have to allow them to have all the control over.

Which means that we’re left with normal means of turning casual social followers into interested email subscribers. We have to provide engaging content that gives people a reason to want more. You regularly create new content and share that content to LinkedIn so that your growing number of connections can learn more about you.

Are there shortcuts? Sure there are, but most will lead to poor, degraded relationships.

Simply adding people to your email list without allowing them the opportunity to Opt In (sign themselves up) will likely be viewed as spam. Don’t believe me? Read some of the comments from a random sampling of Facebook connections when I posed the question:

How do y'all feel about people who add you to their email list without you opting in?Do you think a prior relationship or LinkedIn connection makes that OK?

As you can see, most people consider an unwanted email to be spam, and will unsubscribe themselves immediately.

Worse yet, they actually flag the email itself as spam which leads to a poor sender reputation.

That’s assuming they opened the email to begin with. Most people don’t open emails from people they don’t know or trust, emails they weren’t expecting to receive. Which means that it’s entirely likely that importing a bunch of new subscribers to your list will only result in worse engagement than before.

And let’s not forget that anti spam legislation and your email solution’s Terms Of Service expressly disallow importing of email addresses of people who have not opted into your list. That means such activity could result in the loss of your entire list and system, not to mention fines.

But the bottom line here is this. If you import me into your list from a LinkedIn Connection, it’s likely that I’ll recognize you and I’ll know that I didn’t sign up for your list. So not only will I mark your email as spam and unsubscribe from your list, you will have damaged our already tenuous relationship.

In fact, I can’t think of a faster way to make sure I have no further interest in you or whatever you’re selling, than to try to force it down my throat.

You Can’t Grow Your Email List That Way. But There Is A Way To Use LinkedIn…

The fact is, there simply is no shortcut to converting your social connections en masse into email subscribers. But that doesn’t mean you can’t make good use of your LinkedIn connections, and that export feature.

The best method is to use LinkedIn Messaging to contact specific individuals who you want to form a deeper relationship with, and suggest that joining your email list will facilitate that. (Of course, that means that you need to use your email list for sharing great information, and not just the latest product you’re shilling.)

Using LinkedIn’s connections filters and sorts, you can reach out to people you’ve recently talked with, from a particular company or location, or those that you’ve Tagged. While LinkedIn’s default tags (like colleague or classmate) are likely not very useful, you can create whatever tags you wish. Tagging specific contacts as Prospects or Influencers, or even by industry, could prove very useful in helping to focus your relationship-building on the right connections.

While this technique certainly isn’t as fast as importing 5000 connections and emailing them all at once, it does have the benefit of being more personal and tailored to each individual. Which means that it’s actually likely to result in a higher success rate (with success being measured as the number of truly engaged and interested subscribers).

Or, alternatively, you can use that export to import your LinkedIn connections into Gmail or Outlook or Yahoo!, or whatever email program you use (which was the original intent from LinkedIn), and then email some of them directly.

Again, do not try to email all of your connections at once. Not only does that go back to the issues mentioned above, you’ll also now put your Internet service at risk, since most ISPs frown on people using their personal computers and software to mass email (it’s spam, as well as indicative of a virus).

But most of us will find our normal email clients easier to use and manage than LinkedIn’s messaging.

Now, some of you may be wondering, “What if I imported all of the contacts into a different list within MailChimp, and sent them a one-time email inviting them to my main list?”

Sounds ingenious, doesn’t it? In fact, that’s exactly what another marketer that I know did, which clued me in to this whole concept of using LinkedIn contacts. He exported contacts from LinkedIn (including me), imported the addresses into a new list, and had at least two autoresponders set up that went out to those subscribers. They were nicely written, reminding me that we were connected on LinkedIn, and inviting me to join his regular mailing list.

The problem is, it’s still wrong.

Just because we’re connected on LinkedIn, that doesn’t mean that I opted into your list. Yes, yes, you were just asking me if I wanted to opt in… me and a thousand other people that you mass emailed at the same time. Which means the initial email was still spam.

So don’t make that same mistake. Again, there are no shortcuts to creating relationships!

Concentrate instead on demonstrating your expertise and authority in your content and social media activity. Engage with people when and how they want to be engaged with, and that’s how you’ll grow your email list.

Where to start with your virtual event plan so that you achieve your goals.