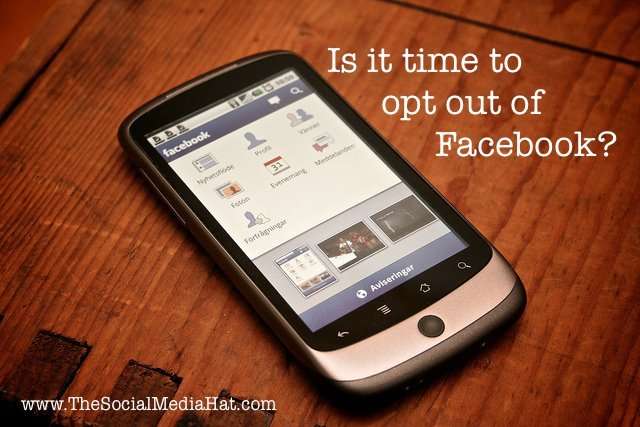 Do you have a Facebook Page for your business? If you do, you’re probably aware that Facebook uses an algorithm called EdgeRank to limit who sees your posts. So even though you may have 1000 people who have liked your brand Page, only a fraction will be shown your latest post.

But now, that reach is getting even worse.

Let me say that again. Facebook is hiding your posts from more and more of your fans, and telling you to pay more to get those posts seen again.

According to comments obtained by AdAge.com, Facebook says that, “We expect organic distribution of an individual page’s posts to gradually decline over time as we continually work to make sure people have a meaningful experience on the site.”

So here’s the problem with using Facebook for Business. You must create a Page, not a Profile. In order to get more eyeballs on your Page, you need to pay Facebook for sponsored posts and ads. And once you’ve paid to get targeted fans to Like your Page, you have to pay again to get them to see your updates.

Anyone not named Zuckerberg have a problem with this formula?

In 2013, I would regularly pay to “Boost” one of the articles that I shared to Facebook to get it greater visibility. I also ran a couple of ads to promote a post or to promote The Social Media Hat’s Page to get more Likes. (I’ve never paid to send someone a message – don’t even get me started on that.)

Fortunately, Facebook does offer a nice Ads Manager that allows me to run reports on my campaigns. I was able to generate a report for my entire year spend and analyze the data. After 34 ads or promoted posts:

And one might argue that, as a purely Per Click analysis, that wasn’t a bad ad spend. But let’s do some comparison analysis as well.

That means that my paid advertising on Facebook only resulted in 10% of my Facebook traffic, the rest was organic. And when I look at the monthly Facebook traffic over the past year, I see it plateauing, perhaps even declining.

(January, 2013 was particularly high due to one article revealing upcoming changes to Facebook’s timeline.)

On the other hand, traffic from Twitter and Google+ is not only dominating my referral traffic, they’re also continuing to grow.

And guess what, I haven’t spent a dime on Twitter or Google+.

Of course, not everyone will have these same numbers. In fact, I daresay my own site is a bit unique to have this kind of mix from social networks. But the fact remains, even if you’re having success on Facebook, how long will that continue? What does your organic traffic from Facebook look like in comparison to your paid traffic. And more importantly, how much more are you willing to pay?

I’ll be the first to admit that my ad spend on Facebook hasn’t been a large investment. I’m sure there are many businesses spending more. And I’m also sure that other businesses have been more successful, either through better crafted ads or because the nature of their business is more compatible with Facebook.

But the real problem, I think, is that businesses are allowing Facebook to perpetuate this system and encourage it. Facebook is creating a Pay to Play system and everyone who participates is feeding the system.

How long before businesses have to pay for every post to be seen by even one person? My average reach right now for a shared link is fifty. FIFTY! Out of 1,200+ fans, I am getting an organic reach of 4%. That’s not a fraction, that’s a joke.

It’s like a city that keeps raising taxes on residents. As taxes go up, more and more residents decide to move someplace else where the cost of living isn’t as high. But that results in lost tax revenue for the city so to compensate, they raise taxes on the remaining residents.

As businesses flock to Google+ and Twitter to find more intuitive ways to use social media for marketing and networking, will Facebook continue to squeeze the remaining businesses?

For businesses that are having a lot of success on Facebook, by no means am I advocating that you stop. If you have a large, engaged following, continue to build on that! And if you’re having success paying for ads and reach, feel free to continue.

But for the rest of us, those whose Page fans number in the hundreds or just a few thousand, it may be time to find greener pastures. I for one have found them in Twitter and Google+. And the numbers I shared above are a testament to that. LinkedIn, YouTube, Instagram, Vine, Pinterest… even SnapChat and other platforms may all offer great options for businesses hoping to use social media to reach and engage potential customers.

I will continue to use my Facebook Page to share my latest posts and interesting articles from other writers in my industry, but I’m done spending money on ads. I’m opting out of Facebook’s Advertising money pit. I have better uses for that money, as I’m sure you do too.

If you and your business aren’t yet on Google+, start now. Give me a call and we can talk about your business goals and how Google+ can help you get there.

And if you’d like to participate in more of these great dicussions on Google+, circle me here.

UPDATE: Almost as if in response, Google announced on Mon. Dec. 9 that businesses will soon be able to use Google+ Page Posts as ads within Google’s 2 million+ display network. That means, rather than having to pay to use Google+ or even pay to advertise to other Google+ users, businesses will be able to extend their Google+ reach into non-Google+ platforms. Read the full story.

EDITOR’S NOTE: In the time since this article was published, our stance on Facebook Advertising has altered somewhat. While it’s still a poor way to use a Facebook Page from a social media perspective, Facebook Advertising is an excellent advertising platform for business in general. Highly targeted, inexpensive ads which can effectively drive traffic to designated landing pages is incredibly smart. For more information on how Facebook Advertising works, and how you can get help, click here.