What Social Networks Do SMBs Use To Reach Customers?

You are here: Home / Social Media Articles / What Social Networks Do SMBs Use To Reach Customers?
Reading Time: 2 minutes 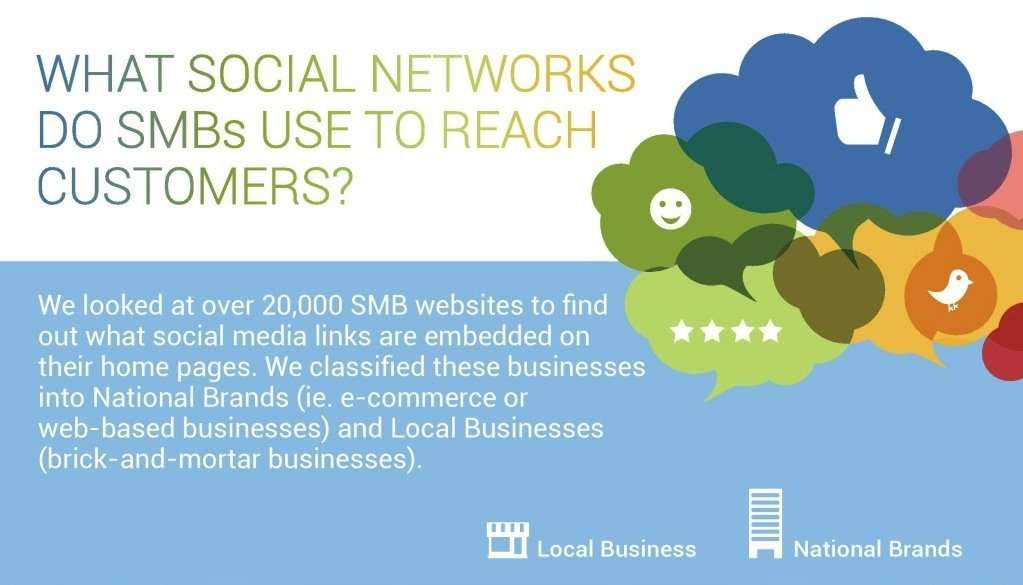 Since we launched Brandify just over a year ago, we’ve learned a lot about the businesses that have signed up for the service and the different social networks they’re using to promote their online brands and engage their customers. Over the next few weeks, we’ll be sharing some of our analysis of the online behavior of over 25,000 US Small and Mid-sized Businesses.

Our first analysis is based on what social media links are embedded on SMB websites. Although not a definitive guide to social media adoption, this provides some interesting insight into where SMB’s perceive they need to have an online presence and where their customers are.

Our findings confirm that Facebook and Twitter remain the most popular social networks among SMB’s for promoting their online brands. Facebook, however, was the only category in which local businesses had reached the same adoption as national brands. On average, local businesses were found to be 7% less likely to link from their website to Twitter, YouTube, LinkedIn, Google+ and Pinterest.

After Twitter, the most popular embedded link on SMB’s websites is YouTube. In fact, YouTube’s penetration among SMB’s exceeds it’s sister service Google+ by a significant margin among both local businesses and national brands.

Google+ Business was launched in November 2011 and is now linked to more often on the websites of both national and local businesses than LinkedIn. That said, Google+ lags significantly behind Facebook and Twitter.

Also, while LinkedIn may be a juggernaut in the professional networking space, small businesses prefer to link to the other social networks on their websites as channels to promote their online brand.

Finally, while Pinterest may be the newest channel for businesses to interact with their customers on a social level, it has already reached nearly half of powerhouse Google+’s adoption and represents the fastest-growing social network adopted by both national and local businesses.

Of course, a link to a social media page from a business website is not the whole picture. In our next analysis we’ll look at 12 month engagement across the different social media sites, where SMB’s are active and engaged with their audience versus just ticking the social media box.

Do any of these findings surprise you? Which social networks are you linking to on your own network?