What NBC’s ‘Hannibal’ Can Teach Us About Social Media Marketing

Hannibal is a violent, artsy, progressive TV series that delves deep into human psychology and interestingly, it can offer a few insights into how social media marketers should behave.

You are here: Home / Social Media Articles / What NBC’s ‘Hannibal’ Can Teach Us About Social Media Marketing
Reading Time: 3 minutes 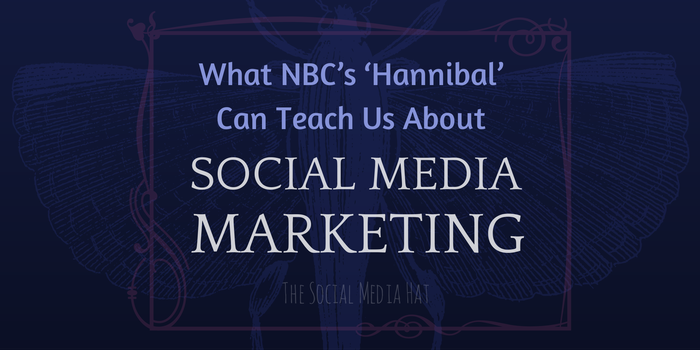 You’ve never seen a show quite like NBC’s Hannibal—which may sound like an odd thing to say about a TV program that’s based on a popular film franchise (in particular the classic, Oscar-winning The Silence of the Lambs) which was itself based on a series of books. Familiar though this world might be, the creative team led by Bryan Fuller (of the short-lived but wonderful show Pushing Daisies) has brought it to life in a way few could have imagined. You may have seen the movies and read the novels, but this show is unrecognizable, with a style—trippy, druggy, psychedelic, way out there—that’s unlike anything else on TV.

And if you’ll pardon the stretch… I also think the show can offer a few insights into how social media marketers should behave.

I’ll start with this: Hannibal is a fairly violent, fairly artsy, very progressive TV series that delves deep into human psychology and has a visual language all its own.

Did I mention that it’s on NBC? Not HBO, not Showtime—not even AMC, where it could hobnob with the likes of Mad Men and The Walking Dead. No, it airs on the same channel as The Biggest Loser and something called American Dream Builders.

For social media marketers, try this on for size: Great content shouldn’t always be locked up behind a gate somewhere. If you’re reserving all the great content for people who sign up for your email newsletter, or who answer survey questions—if you lock all your prime content behind any kind of a gate—then you’re not appealing to the masses the way you need to. Social media marketing is about offering something of value. To everyone. For free.

Something else I might mention about Hannibal: It’s a TV cop procedural. Yes—it fits into the same basic genre as CSI or Criminal Minds. Just try and spot any big parallels, beyond on-paper ones, though. Fuller and his creative team have taken a stale and overly-familiar genre and presented it in a totally bonkers new light, ensuring that even when it hits routine notes cops checking out a crime scene, or a moment of courtroom drama—it feels like something you’ve never seen before.

As a social media marketer, you’ve got to know that you’re seldom going to say anything that’s never been said before. You have a mandate to say it in a way that’s fresh and original, however. You’ve got to take familiar concepts and put them into your own voice. For instance: None of the individual tips in this article are totally new or original—but the presentation—much like the plates prepared by the show’s titular character, a true culinary artist—is hopefully something you haven’t come across previously.

For all of this, it’s worth mentioning that—though the show doesn’t enjoy great ratings or a big cache of awards—it really is a mesmerizing and unique show, and one of the best things currently on TV. (It’s got the brilliantly good reviews to prove it.) Frankly, all of this other stuff would matter not a whit were the show not well acted, compellingly written, and memorably filmed.

It’s the same way with your social media content. This isn’t anything you don’t know, but it’s something worth reminding yourself of daily: If the quality isn’t there—in the writing or images you’re using—then all the strategy in the world is only going to get you so far. You’ve got to be original and you’ve got to appeal to human emotions—but even more basically, you’ve got to be good.