What Is Happening With Blab?

Blab, one of the most popular platforms today to create live video broadcasts and recordings, seems to be moving in a new direction and that has marketers extremely worried.

You are here: Home / Social Media Articles / What Is Happening With Blab?
Reading Time: 5 minutes 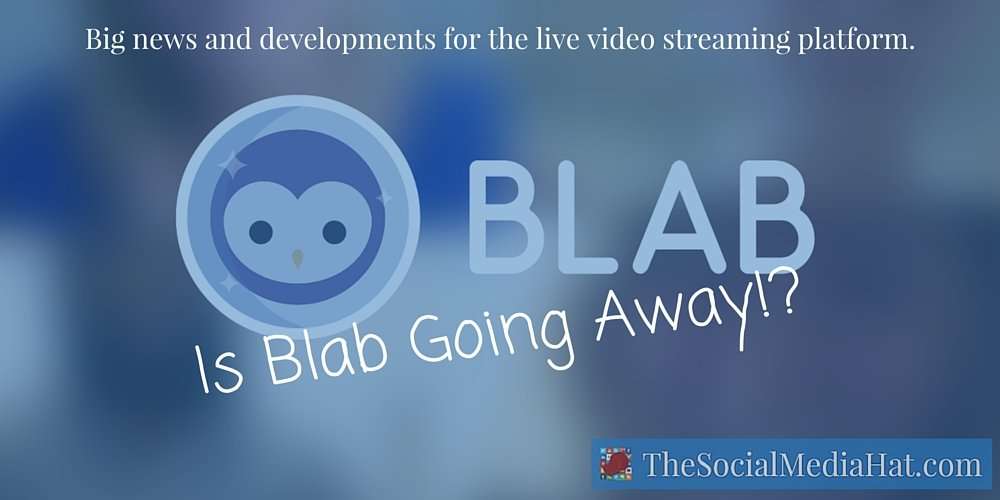 Is The Popular Live Streaming Platform Going Away?

UPDATE: As of August 12, 2016 Blab has been shut down. Founder Shaan Puri said that the company is now 100% focused on their new project (Bebo) and that they can no longer sustain resources to keeping Blab up and running. He cited two main issues with the platform: 1) Most live streams suck, and 2) Most users weren’t using the platform to create content every day. While Blab was fantastic for broadcasters, that wasn’t Shaan’s mission, and he said he’d rather fail at his mission than succeed at someone else’s. The service was closed without warning or alternative, which means that all accounts and recordings have simply ceased to exist. Those who have developed an audience there have no choice but to start over elsewhere.

The past twenty years have seen social networks come and go. Change and evolve.

For users in the midst of those changes, it’s a frightful, chaotic time. No one likes to see major changes in the platforms they use and the workflows they’ve integrated into their work and lives.

So when a major platform used by millions to meet, have video conversations, and stream live broadcasts to their audiences suddenly seems to be pivoting in a different direction, that’s a concern.

Businesses and marketers and broadcasters have been using Blab to stream live video broadcasts. They’ve come to depend on the platform to assist in the creation of webinars, videos, podcasts… incredible content that’s extremely effective at reaching and educating new audiences.

It’s understandable then that people are concerned.

I’m going to share with you exactly what happened and what Blab had to say in response. I’ll also review real quick what Blab is, as well as the environment we find ourselves and where we can expect to go from here.

Blab is a social network designed to give users a platform on which to connect and have live video conversations. Up to four people can participate in the live video simultaneously, with many others tuning in to watch within an instance of a “blab.”

Blab participants can ask questions and chat real-time, as well as share links to the blab to Twitter or Facebook. The people participating in the live video stream can drop out and others can take their place on the fly. Anyone with a webcam and microphone can participate.

More importantly, any blab session can be recorded and downloaded. It’s that capability which turned Blab into a fantastic platform for content creators. Recorded discussions and interviews can be uploaded to YouTube and Facebook, and the audio can be used as podcasts.

Prominent influencers have been developing weekly shows and dedicated followings on the network, just as we saw with Google Hangouts On Air throughout 2013 and 2014.

What’s All The Fuss?

A new app was released, Bebo – Swipe To Chill, which was developed by the team at Blab and seems to shift the focus of the company to a different audience and different model. It appears to be designed to facilitate video chat with your existing friends, much like Snapchat.

In the weeks leading up to that app’s release, we did see effort being put into improving and changing the Blab platform, but not in the areas of stability and usability that broadcasters might have preferred.

Seemingly simultaneously, the home page at http://blab.im, which has already gone through several iterations, changed again. But this time, rather than highlighting specific blabs going on now, it seems to offer a new direction and target audience for the platform. 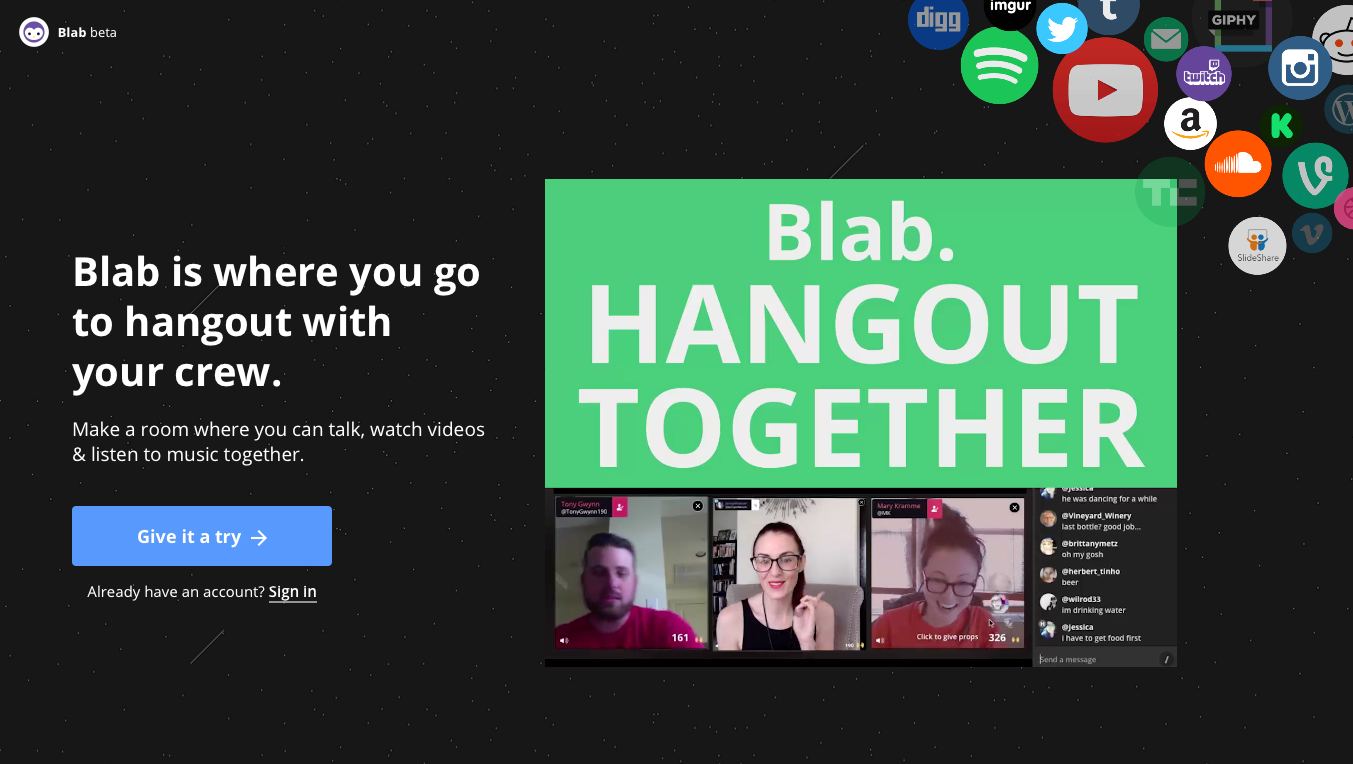 As you can see from the headline, Blab is where you “go to hangout with your crew. Make a room where you can talk, watch videos & listen to music together.”

Not broadcast? Not connect with an audience?

It’s these changes that caused regular users and broadcasters to sit up and start asking what’s going on, and to suspect that Blab might be undergoing a radical transformation – perhaps even shutting down.

Taken by themselves, these developments might not seem so Earth-shattering. Doubtless many normal Blab users were unaware of the changes and surrounding concerns. But of course broadcasters and marketers aren’t normal.

The fact is, not only are all social networks constantly in flux, they also do not exist in a vacuum. Blab’s live video streaming exists simultaneously with Google+ Hangouts, Meerkat, Periscope, YouTube Events and Facebook Live.

In March of 2015, Meerkat exploded onto the scene thanks to influential exposure at SXSW. Up until then, Hangouts had reigned as the supreme video streaming service, despite flaws and technical hurdles.

When Meerkat made every user with a smartphone a broadcaster, it was revolutionary. That glory lasted all of about two months when, shockingly, a team from Twitter released Periscope. A direct competitor to Meerkat, but one with the full support and backbone of an established network. Meerkat has since announced a pivot and has exited the live streaming war.

While Blab is clearly a replacement for Hangouts with its support for multiple live users, and Facebook Live is more like Meerkat and Periscope, what’s also clear is that Facebook is moving swiftly in the direction of multiple participants.

Is that the kind of battle a startup wants to fight?

What Do We Know?

Shaan Puri, Blab’s founder and CEO, hosted a Blab Q&A on Friday night to talk to Blab users and potentially dispel some of the rumors that had been floating around throughout the day. (And special thanks to Joel Comm for the wrap up.)

Puri said that Blab is not going away (yeah, well, see above). They have plenty of funding, but they are not focused on using Blab as a broadcaster platform. It’s designed for people to come and hang out and have conversations, and that’s what the focus will continue to be.

That new app? Bebo is an experiment designed to give them greater insight into specific demographics and use models.

Neither the desktop interface nor the mobile interface of Blab will be going away. While they likely will not be adding new broadcaster tools, it seems clear that, as of today, they do intend to keep the existing tools, such as:

They’ve spent time reviewing the data from Blabs to-date and found that most of the real engagement and interaction took place outside of recorded sessions. So as we move forward, we should expect to see additional experiments and changes intended to further explore and support that use.

Where Do We Go From Here?

Does that mean that broadcasters need to find a new home? Not necessarily. Yes.

The unfortunate truth though is twofold.

First, Blab, whether intentionally or not, has already rocked the confidence of the broadcasters and influencers most prominently using the network. The impact this has on the future of the network is not to be taken lightly. Social networks are often compared to parties or local pubs for apt reasons. No one goes out to be alone. You go to a party or to your favorite hangout to see your friends and have fun. That’s why influencers are so critical to the success of a network. They bring established audiences to the party! And when they leave… that can spell disaster.

Facebook understands the power and appeal of video, and is doubling-down on making it easy and accessible for every Facebook user to create and participate in live video. And unlike Blab, Facebook seems to be adding features and options designed to encourage broadcasters.

Right now, innovative broadcasters are creating ways to stream their live Blabs into live Facebook video to leverage that platform and audience.

You see, if you create a Facebook Live video stream, your Facebook audience is notified, Facebook makes your video more prominent in the feed for as long as you’re live, and once you’re finished you get that precious recording for all of your other platforms.

What do you think will happen once Facebook builds in the capability to bring more than one Facebook page or profile into a live video stream?

Right now, if you want a stable platform on which you can host a professional-grade interview or discussion, perhaps even a webinar, it’s clear that Hangouts is still the best option. Despite inherent flaws, it’s the network most likely to deliver that end-result you’re looking for at the highest quality, particularly with integrations and tools like Webinar Jam. There are certainly other platforms. Social Media Examiner is currently using Huzzah.io along with Wirecast to simultaneouly broadcast to Facebook Live.

What Blab brought to the table was ease-of-use and discoverability.

Don’t be surprised when Facebook sprints past both platforms.

So feel free to keep using Blab as the primary vehicle for your shows and podcasts. However, keep a weather eye out for what’s coming, and be prepared to shift your processes.

Subscribe to my newsletter to have those kinds of developments emailed to you.