What Is Going On With Google Plus?

There’s been more news from Google about Google+ and once again, there’s confusion and doubt about the network’s future. But you may not be hearing all of the facts.

You are here: Home / Social Media Articles / What Is Going On With Google Plus?
Reading Time: 5 minutes 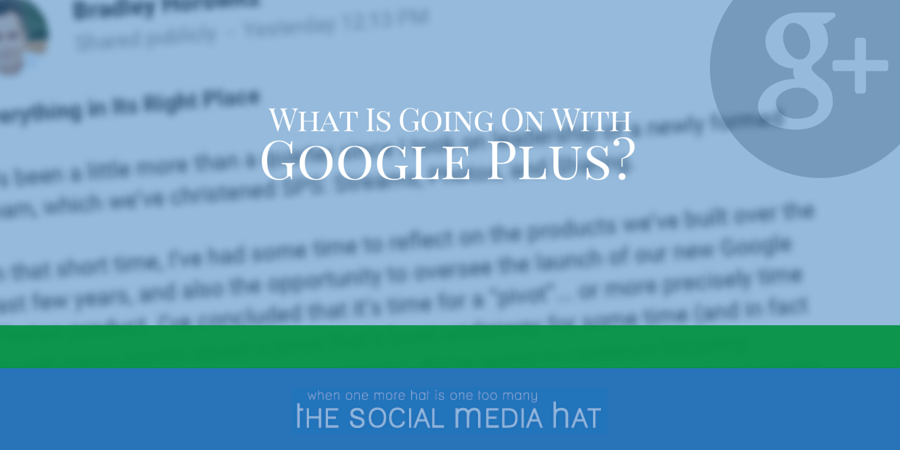 Perhaps you’ve seen the news, perhaps you haven’t, but once again, Google has made some decisions and course-corrections with Google+ that have caused a bit of a ruckus. Naysayers are naysaying again, and fanboys are getting as desperate as the Cubs to spin a win out of things.

So what’s really going on?

First, some fact-checking and news-reporting so we’re all on the same page.

This week’s announcement was quite impactful. Google stated that Google+ would no longer be a “social layer connecting all of your Google accounts and services.” Instead of having to have a Google+ account to use and comment on YouTube videos, or save pictures to Google Photos (which is another topic we’ll discuss in a moment), all you need is a Google account… and sometimes no account at all.

For those diehard YouTube users who were flummoxed at the integration imposed on them a while back, this is great news. But what does it mean for Google+?

VP of Google Photos and Streams, Bradley Horowitz, said that, “We’re going to continue focusing Google+ on helping users connect around the interest they love, and retire it as the mechanism by which people share and engage within other Google products.”

He goes on to say that, “relieved of the notion of integrating with every other product at Google, Google+ can now focus on doing what it’s already doing quite well: helping millions of users around the world connect around the interest they love. Aspects of the product that don’t serve this agenda have been, or will be, retired. But you’ll also see a slew of improvements that make this use case shine (like the recent launch of Collections).

Those are critical points, and not to be overlooked, particularly if you’re concerned about the naysayers.

Would Google, the world’s third most valuable brand, continue to invest time and resources into a product that was failing?

You see, one of the easy criticisms of Google+ is that it is a failure. It was touted as the “Facebook Killer” and now, four years later, it’s been unable to topple the social giant. And with each new development and spinoff and pivot, it’s becoming increasingly clear that Google wants nothing more to do with Google+.

That’s the argument, and it’s full of holes.

To start with, Google never claimed that Google+ was going to topple or kill anything. It was certainly marketed as a new social network, one that filled some gaps and provided missing functionality – but the idea that it would destroy an existing network and completely replace Facebook? That was from mainstream media and social media pundits.

Google saw that every social network, not just Facebook, grouped all of your connections together. You’re either friends, or your not. But Google believed that’s not how we interact with people in real life. We have school friends, work friends, family, acquaintances, colleagues, prospects, church friends, neighbors, friends of friends, and people we’d just like to get to know better. We have all kinds of different interests, and not all of our friends share those interests. Thus, Google+ invented Circles.

The other flaw in the above argument against Google+ is that it continues to compare Google+ and its developments against other social networks, as though they’re the same. They aren’t.

Google+ isn’t a standalone business that needs to be careful about not rocking the boat too hard. It’s part of the aforementioned third most valuable brand. Which means Google can afford to make radical changes. Run incredible experiments. And do things that other social networks only dream of.

No other platform on the planet can operate with that agility.

A Basket Full of Apps

I mentioned earlier that naysayers like to point to Google+ “spinoffs” as signs of impending doom. Most recently, I’m referring to Google+ Photos becoming a standalone service called Google Photos. It is now it’s own app and service, and all Google+ Photos data has been migrated and is being retired imminently.

Of course, you could say that clearly, Google doesn’t want to have anything more to do with Google+ and is rescuing a successful piece of Google+ to retain as a long-term product. But you’d be wrong, and here’s why.

Let’s go back to November of 2014. At that point, one of the most popular aspects of Google+ was Hangouts, as they were being used for group text chats, video calls, and most importantly, Live Broadcasts. Google announced that Hangouts was going to released as a standalone app and service, pulled out of Google+. You’d still use your Google+ account to use and access Hangouts, and Hangouts would still be accessible within Google+.

So what was the real difference?

Rather than use a single Google+ app for both Google+ and Hangouts, now you have two.

Stay with me here. This is referred to as “Multi-App Strategy” and was explained beautifully by Kathleen McGing in “The Conscious Uncoupling.” There are a lot of reasons and benefits for multiple apps, but the key point is this: “A multi-app strategy benefits businesses by providing them multiple ways to reach their audience and even create new revenue streams.”

Having Hangouts as a separate app gives Google more “footprint” within the app repositories, and more chances to bring in new users.

And it’s great for users, as the dedicated app is focused 100% on being the best it can be at that particular purpose, rather than trying to be part of the larger network.

Facebook has long recognized the need for multiple apps, and felt woefully behind Google in this respect. That’s why you are now forced to use Facebook Messenger on mobile rather than message your friends within the Facebook app.

The Facebook Messenger app offers a superior chat experience over the main Facebook app, and will continue to improve, as it is able to iterate without being confined by the parent app. And it adds yet another Facebook app to the App Store.

As Facebook continues to push and refine the use of “native video,” watch for a Facebook app dedicated to uploading and perhaps viewing Facebook videos soon.

So to bring us back to recent events, Google uncoupled the Photo functionality from Google+. Long touted as one of the best features of the network, sporting incredible editing, organizing and sharing capability, it makes sense then to pull Photos out and make it available on its own.

And it makes sense to do so in a way that, while introducing and encouraging users to employ Google+, it’s not a requirement to do so. Thus easier for users to start using Google Photos on its own, gaining traction.

What Does That Mean For Google+?

If you aren’t using Google+ in any meaningful way, these kinds of developments should be interesting, since it may allow you to more easily incorporate great Google apps and features into your workflow, without having to dedicate time to becoming better acquainted with Google+ on the whole.

If you are using Google+ in a meaningful way, ignore the naysayers. Some people enjoy speculation and discussion, and there are certainly sites that love going to the “Google+ Is Dying” well to garner clicks and traffic. But the clear fact is that, not only is Google+ not dying, it is poised to be even better than ever for the things we value the most. Creating new connections and participating in great discussions on the topics we’re passionate about.

if you havn’t already, circle me and join my community of bloggers:

But is this entire article just spin? Perhaps. Only time will tell for sure. I know some of you may be heartily disagreeing with me (and in fact, probably didn’t even get this far into the article.) And that’s OK. I’m sharing my opinion, and you’re free to have yours. And you’re free to share it in the comments below. If you think that Google+ really is failing, a failure, or headed in the wrong direction, I’d love to hear why you think that.

Choose the best virtual event planner option for your needs.