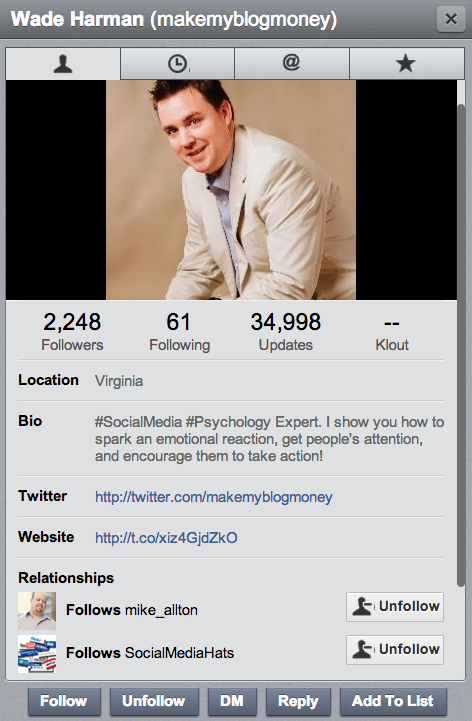 Back in August, HootSuite wanted to kick their internal development and improvement into high gear, so they scheduled a two-day hackathon. “#HootHackathon is a two day sprint to build something new, fix something old or just create something awesome.” Projects are wide-ranging, and inspiration comes from a variety of sources, but most important are HootSuite’s Feedback Forum entries – comments and suggests and requests from HootSuite users. HootSuite made it a goal to build three of the most-requested features in the forums, and this is the second one (the first was being able to see who’s retweeting you).

What HootSuite has now incorporated into your dashboard is the ability to see whether or not someone is following you, or any other Twitter profiles you happen to have connected.

Simply click or tap on someone’s profile name to bring up their profile card. Scroll down to the Relationship section and see whether or not they’re following any of the Twitter accounts that you have connected.

For instance, in my own HootSuite dashboard I have my personal Twitter as well as my branded Twitter for The Social Media Hat. If I look at anyone else’s profile, I’ll be able to see whether or not they’re following either of my accounts. I can also easily follow or unfollow that person with any of the accounts listed using buttons provided for each account.

While being able to see whether or not someone is following you is interesting, that fact in and of itself isn’t new – you could do that within Twitter natively already. True, you couldn’t view multiple accounts at the same time, so that’s cool. But that’s not what makes this so interesting and compelling for businesses and marketers.

One aspect of social media marketing that I teach, particularly for other businesses who are in the B2B sector, is Influecer Marketing. In addition to or even instead of trying to reach customers, you try to connect with individuals and other businesses who could potentially be influential. Typical examples include people who might be able to refer business to you, peers and colleagues in your industry, vendors, or perhaps individuals in key positions within companies whom you would like to work with.

Influencer Marketing should never be approached like stalking! While it is a deliberate attempt to connect with someone, it must be approached with care and respect.

With HootSuite, you can search tweets and other people’s Twitter Lists for potential influencers and then check out their profiles, as well as instances when you’re fortunate enough to notice that a potential influencer has retweeted or mentioned you. Once you find someone you’re interested in, that’s when HootSuite really shines as a Twitter tool.

Other Twitter tools, and Twitter itself, will give you some information when viewing another user’s profile, but nothing to the extent that HootSuite does. The HootSuite profile card as a Twitter tool can tell you basic information of course like their followers, tweets and Bio, but also:

You can take a look at someone’s profile and their activity and then quickly add them to one or more Lists that you maintain on Twitter to help organize your influencers, perhaps by industry or role, or whatever makes sense for your business.

So by adding the ability to view your existing relationship with someone and see if you’re following them or if they’re following any of your accounts, HootSuite continues to give businesses tools to monitor and improve their connections to influencers.

We’ll be looking forward to the other features HootSuite plans to release anxiously, and will certainly let you know what they are when they’re announced. In the meantime, I would encourage you to dive into my series on HootSuite: How to Make the Most of Your HootSuite Account, where we cover the basics like setting up your dashboard and scheduling content, to more advanced topics like Teams and more. You can also grab a free trial of HootSuite (thanks for using my affiliate link! I appreciate the support), or contact me directly for help getting started.

Previous Post: « Google Turns Hangouts into Complete Communication Tool
Next Post: When You Should (And Shouldn’t) Use a WordPress Plugin »