The Technology of Star Trek is here, today 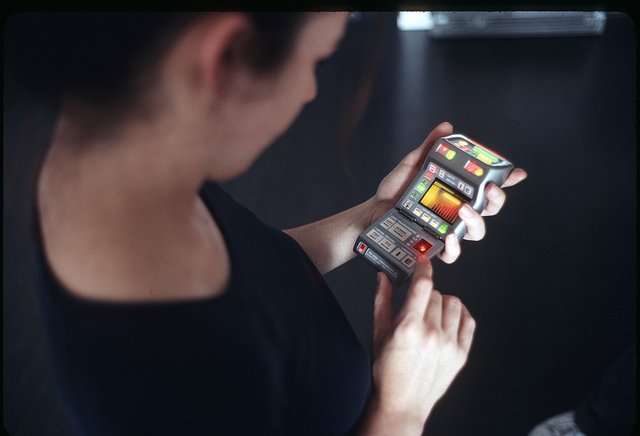 If you aren’t a fan of the iconic Science Fiction show Star Trek, bear with me here. I think you’re going to be pretty amazed at what’s been happening lately.

The idea that modern technology is being inspired by or even mirroring that which was imagined on Star Trek is not new. There’s even been a TV program hosted by William Shatner that talks about all of the developments that sort-of look like Star Trek gadgets. From computers to cell phones, some pretty amazing things that we take for granted today were an everyday part of the crew of the Enterprise.

Pretty much everyone now is familiar with the Google Glass project. These futuristic-looking glasses have built in displays for the wearer, respond to eye movements, and of course are voice-activated. They also bear a strking resemblence in concept to the eyepiece worn by Lt. Commander Geordi La Forge, Chief Engineer of the starship Enterprise during Star Trek: The Next Generation. 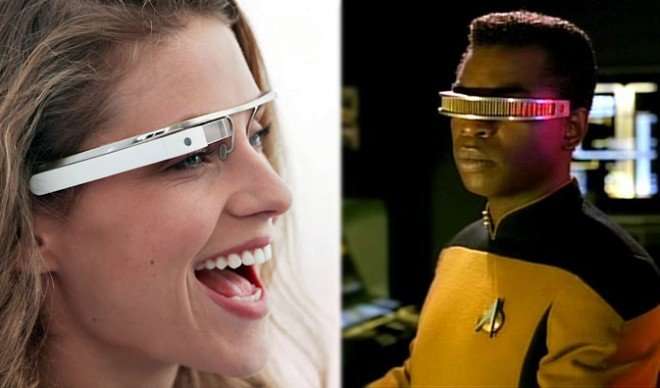 Geordi was born with a birth defect that left him blind. To compensate, he was fitted with optical implants and a VISOR that transmitted data directly to his brain. Not only did it allow him to see, but it allowed him to analyze visual information at far more levels than our normal eyes, including infrared, spectragraph analysis and more.

Google Glasses are designed to record everything we see, and it surely won’t be long before more apps are made available to do more with that data than simply record it.

What you might not have noticed is that Google is not-so-quietly trying to build the equivalent of the Star Trek Main Computer. On each of the TV shows and films, the crew relied on a powerful computer system to help them run their ship and manage all of the day-to-day activities and research. The Main Computer responded to conversational questions and immediately provided the answer to questions, not just a list of possible sources for the answer.

Today, Google is providing just that level of functionality within its search on every platform. You can now ask Google a question and Google will try to actually answer the question, not just give you a list of websites to look at. What’s more, Google understands the meta conversation going on. If you ask Google a question, and then ask a related question, Google can remember the first question. For instance, you might ask, “How old is Barack Obama” and then ask “How tall is he?” Even though we used “he” rather than an explicit search, Google’s powerful search engine can undertsand that we were referring to President Obama and answer the question accordingly.

And there’s the fact that on Star Trek, not only did all computers include voice interface, they were completely touch screen. Crew members would walk around with pads that sure look a lot like our tablets of today. As voice interface technology improves, we will have less and less need for hardware keyboards. Similarly, our virtual keyboards on our iPhones and iPads are due for an upgrade (don’t be surprised if that’s part of iOS 7 or 8).

The voice of the computer on every Star Trek series and five of the films was provided by the late Majel Barrett-Roddenberry, wife of series creator Gene Roddenberry and who is often referred to as “The First Lady of Star Trek.” Not surprisingly, Google’s voice response is somewhat similar to Majel’s voice. 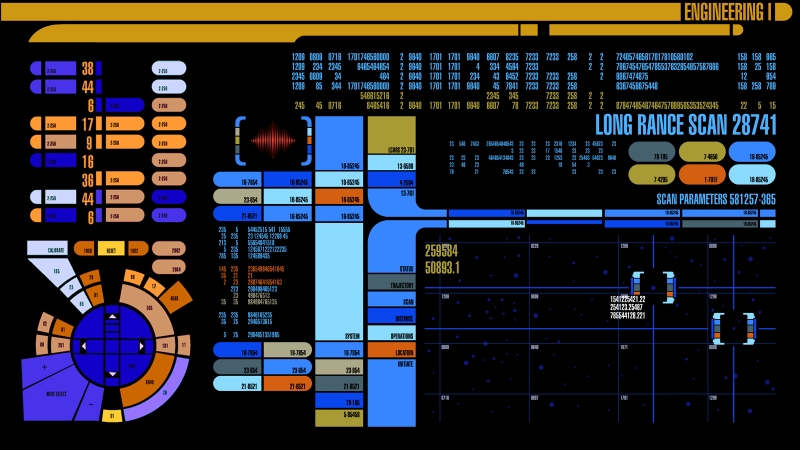 Google’s Amit Singhal in an interview with Slate stated that “The Star Trek computer is not just a metaphor that we use to explain to others what we’re building. It is the ideal that we’re aiming to build—the ideal version done realistically.” He added that the search team does refer to Star Trek internally when they’re discussing how to improve the search engine. “It comes up often,” Singhal said. “For instance, we might say, ‘Captain Kirk never pulled out a keyboard to ask a question.’ So in that way it becomes one of the design principles—we see that because the Star Trek computer actively relies on speech, if we want to do that we need to work to push the barrier of speech recognition and machine understanding.”

This technology, and the kind of information that can be provided, is improving at an hourly pace. Clearly we have a long way to go before we will be able to have conversations with our computers like on Star Trek, or like HAL from 2001, but we’re not as far away as you might think. Arthur C. Clark may have overshot the mark, but not by much.

Alright, so the glasses are neat, and we’ve all expected talking computers for a while now, but a food replicator? Come on, you’re joking, right?

Not according to NASA, who has authorized a $125,000 grant to further research and development of a machine that will create food, actual dishes like pizza, out of seemingly nothing.

In the Star Trek series starting with The Next Generation, which premiered in 1987 and was set in the 2360’s (about 100 years after the original series), every crewmember had a niche in a wall of their quarters that contained a Food Replicator. The device had a computer interface so that you could offer voice commands, and whatever food or beverage your requested would materialize within the recession in seconds. The concept was that technology had advanced to the point where basic molecules could be stored and then converted into complex systems, including organic matter, according to preset patterns.

Such a device has actually been invented by Anjan Contractor, a mechanical engineer, and currently works with limited capability.

Actually, it’s an interesting take on the rapidly developing 3D Printer. Instead of ink, the device is fitted with cartridges that contain substances like proteins, carbs, sugars and other building blocks. The “universal food synthesizer” will have proprietary hardware but open source software, allowing developers to create whatever recipes and concoctions they wish. It’s appealing to NASA because the cartridges literally last decades, allowing space flights all the way to Mars to remain fed.

And last but not least, there’s development of a device that actually includes many of the functions of the Star Trek Tricorder. The Tricorder was a scientific measuring device that could scan an area and report back analysis and record data. We already have a lot of these capabilities in our iPhones and other devices. However, what’s being developed now is a version of what many would call a Medical Tricorder. On Star Trek, there were several variants of the Tricorder, designed for specific applications. The Medical Tricorder was obviously designed to scan people and help a physician quickly determine things like broken bones, disease, blood clots and more.

Scout, a device designed by Scanadu, will scan your vital signs, temperature, ECG, heart rate, oximetry and stress just by placing the devise against your skin. The scan results are then sent to your smartphone for recording and analysis.

Scanadu also has developed a separate test that one can use to take a saliva or urine sample, and then simply photograph the sample with your smartphone and analyze the results with their app. It doesn’t seem far-fetched that someday soon, we’ll see Medical iPhones, or something similar, that are build specifically for the medical industry and have these kinds of capabilities built in – additional sensors and inputs that the average smartphone wouldn’t need.

There are certainly many people who were never fans of Star Trek and have never understood why so many others are obsessed. Yet the show is arguably the most successful franchise ever imagined, with six television series, now twelve films, dozens of annual conventions and countless books and other merchandise. That’s due in large part to the strength of the stories and characters, but it’s also due to the fact that all of the technology in the series and films is not as fantastical as you might think. The creators and writers tried to imagine what our own world and technology would be like hundreds of years from now. Considering how quickly we’re developing, it sure looks like we’re ahead of the pace.

So soon, you’ll be able to ask Google for Tea, Earl Grey, Hot, and watch as Google sends your order to the printer.

8 other ways to use a virtual event platform!