The Social Media Hat has an all-new look for the New Year!

Welcome to the new version of The Social Media Hat! There’s a lot that’s been packed into this update, including changes to both the back and front-ends, new and consistent branding, better social media integration, and more.

You are here: Home / Digital Marketing / The Social Media Hat has an all-new look for the New Year!
Reading Time: 4 minutes 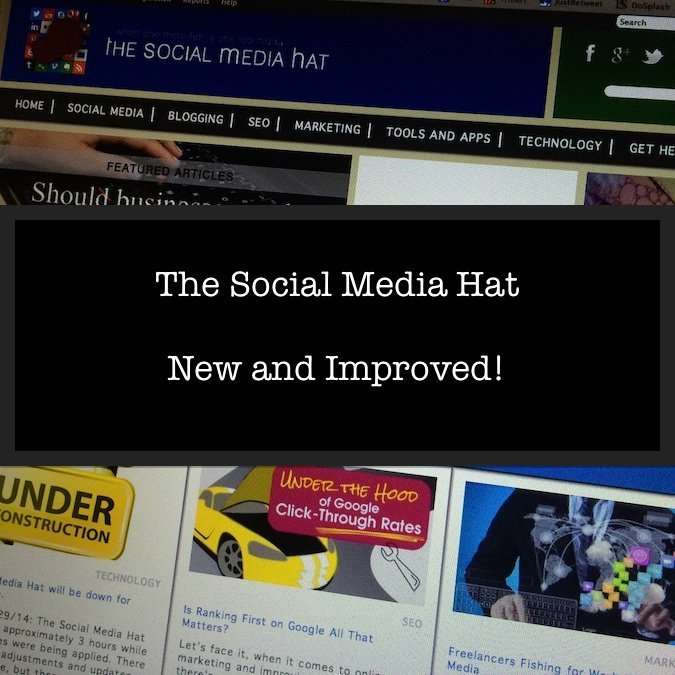 Welcome to the new version of The Social Media Hat! There’s a lot that’s been packed into this update, including changes to both the back and front-ends, new and consistent branding, better social media integration, and more.

A New Look for The Social Media Hat

First, and most importantly, the entire site has received a facelift, starting with a brand new logo! What do you think?

We have continued the same flat, contemporary design that we started with when the site launched on Sept. 1, 2012, but added more structure and color and interest. We have also carried the design over to new, custom Cover Photos on Google+, Twitter, Facebook and LinkedIn. The entire look is inspired by my wife and graphic designed, Eva.

Images have grown in importance and prominence. Home page images are now landscape, and every blog post’s primary image is now front and center.

And we listened to readers who asked for larger, more readable fonts. Hopefully your reading experience is even more enjoyable than before!

A New Upgraded Engine for The Social Media Hat

And the entire back-end of the site has been upgraded. We’re still using the same, professional-grade CMS platform, Drupal. But have upgraded from Drupal 6.x to the latest production release, Drupal 7.24. The now loads faster, and has a slew of new features. But getting there wasn’t easy! Upgrading Drupal sites from one major release to the next is always complicated, and there were a ton of differences between 6 and 7 that made it even more so. So much that it required site downtime and had to be accomplished overnight on Saturday, the 29th.

I began by putting the site into Maintenance Mode at 11pm CST Saturday after making complete backups of the site and database. I had to disable all contributed modules and then delete all core folders and files, replacing them with the new Drupal 7.24 files and folders. After running the update script to update the database, the next couple hours were spent removing and replacing contributed modules with 7.x versions of each. Most upgraded without difficulty, but several required additional steps and tweaking. For instance, due to the massive change in how content types and custom fields are used, a special CCK module had to be installed and configured to successfully migrate all custom fields. All blog and article images are a custom field, so getting this working was imperative! Once that was set, the new design, which I had done most of the initial work in a sandbox environment, had to be uploaded, enabled, and then completed. All told, the initial implementation took 8 hours and was complete at 6am Sunday.

Over the next few days, additional adjustments and bug fixes were executed, and many new features tested and implemented.

For instance, one of the reasons for upgrading the entire back-end, rather than just creating a new design for the old site, was that the new platform fully supports Twitter Cards. Twitter Cards are only about a year old, and initially were only open to large media sites like The New York Times. As more and more brands and media outlets were accepted, I wanted to obtain the capability for The Social Media Hat, but the old Drupal 6.x platform was too limiting. To work, you must be able to set a number of custom meta tags on each new article and post, telling Twitter what the title, description, image, and Twitter handles are. But with our upgraded platform, I was able to implement the Twitter Card meta tags, automatically populate every single blog and article within the site, and successfully apply to Twitter. Within an hour, my application was approved and my tweets now look like this:

The Importance of Ignoring Your Publishing Schedule http://t.co/8VOWdy3y9i

But not just my tweets. Anytime anyone shares a link from my site and one of my articles to Twitter, it will include the “summary” information of the name and handle of the site, the author’s name and handle, and the title and teaser of the post.

This means that as articles and blog posts are being shared to Twitter, you and other readers will be able to find out more about the articles without having the leave the tweet.

I have applied for similar functionality on Pinterest, and now that I’m on an updated platform, will be better positioned to take advantage of similar developments and opportunities in the future.

Additional Updates and Features, and a Look Ahead at 2014

We have some big plans ahead for 2014! This new site and platform has been designed to help communicate, teach and engage with our readers.

In the coming year, I will focus more and more on blogging and the ties between content creation and social media and relationship building.

I will be working to finish my book on content marketing that brings all of these concepts and tools together in one place.

And I will be launching a new Membership Community for those who wish to master the art of blogging, either for their business or as a business in and of itself.

Oh, and just one more thing… watch for a new, regular Hangout On Air coming to a theatre near you! Our show will feature some fantastic guests and experts on blogging, social media and technology, and be packed with great information and fun conversations.

2014 is going to be a great year! Make sure that you’ve signed up for our weekly newsletter to ensure that you don’t miss any articles or announcements.

So from our family to yours, I want to wish you a Very Happy New Year! May 2014 bring us all much success and happiness.

Previous Post: « The Social Media Hat will be down for maintenance.
Next Post: Should I use a Social Media Profile or Page? »