The New MySpace is Live. Is it Cool?

You are here: Home / Social Media Articles / The New MySpace is Live. Is it Cool?
Reading Time: 4 minutes 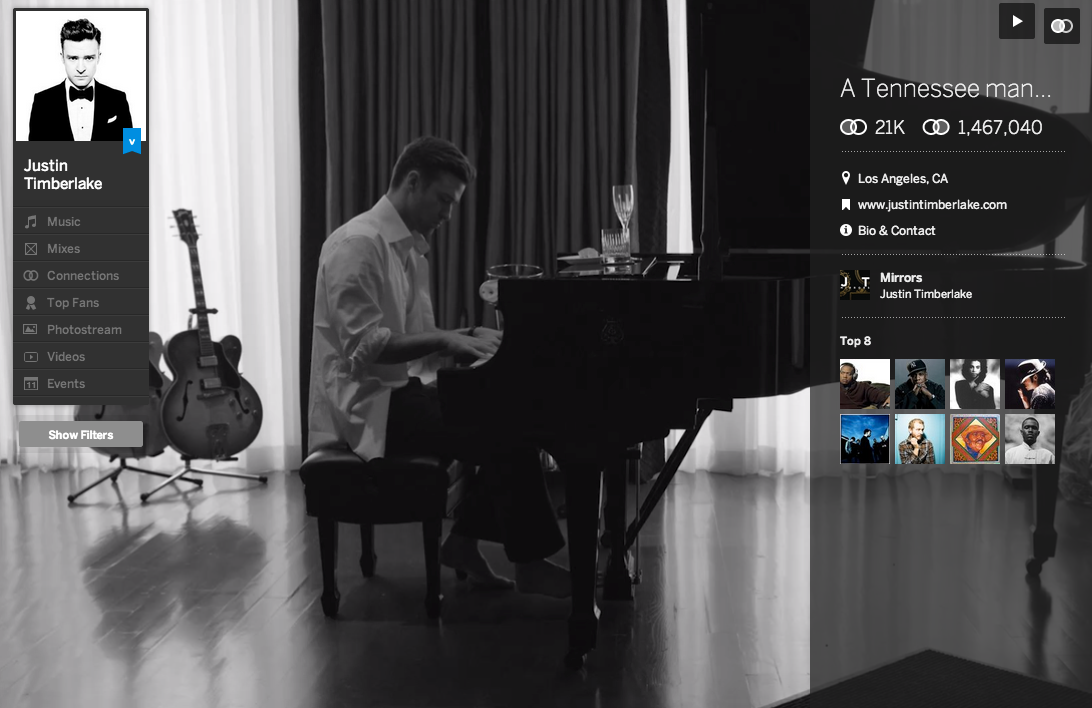 “I want it to constantly be about who I’m going to be,
what I have to offer the next day and the next day.”
Justin Timberlake talking about MySpace

“You don’t even know what the thing is yet.
How big it can get, how far it can go.”
Justin Timberlake as Sean Parker in The Social Network

In December, 2012, some of us were invited to preview the New MySpace. Justin Timberlake, who had invested in the failing network a year previously, promised a sleek look and a platform where users can not only discover new music, but really connect with artists and each other.

I think it is going to be a success, but I’ll let you be the judge.

After several months of continued tweaking and improvements, the New MySpace has now replaced the Old MySpace. When you visit MySpace now, you’re greeted with the gorgeous new design and a Welcome message. Your account, if you had one all along, has been migrated, but little else. Old status updates and links, for instance, are gone. You’re starting with a clean slate.

The focus of the site is music and photography, so be prepared for large, rich images and controls that mimic stereo controls.

Oh, and it scrolls right and left.

That takes some getting used to, as the standard for most every other site on the planet is to scroll up and down, particularly for content-heavy sites and social networks.

Users are encouraged to upload a profile pic, of course, as well as a cover photo that’s even bigger than Google+. The MySpace mobile app also received a major update last week to reflect the site’s new look and functionality.

What is there to do?

The easy way to get started is to simply look up some of your favorite artists or albums. You can connect with the artist or a specific album, check out the song list and even queue it up to listen to it. Entirely. As long as you’re on the MySpace platform, you don’t have to pay a cent to listen to your favorite music.

Save albums, put songs into playlists, and listen to whatever you want. You can even link and embed videos, and MySpace uses its own video system.

While you’re listening, check out some of the other things artists have going on, be it photos or videos or upcoming events.

Along the bottom of the site you’ll find a control bar that gives you access to whatever you want to do. You can head back over to your own profile, view notifications or messages, as well as post a status update of your own.

Not sure what you want to do? Click on Discover. You can browse music, videos and more, selecting a genre and scrolling through suggestions, or just letting it play like a radio station.

So as I mentioned earlier, all of your old status updates are now gone. For some, that’s not a big deal, but for others, it’s a great disappointment. Many of us have been regularly sharing updates and posting links to articles and content, and all that effort is now gone. And it would appear that most share buttons on other sites are currently broken.

However, you can still create status updates within MySpace and even link articles with rich snippets. You can paste in a link and see what the link preview will look like to the right, as well as attach photos, video, your location and even a specific song.

As a business, this is where you have an opportunity to talk about yourself, of course. But like any social network, everything you say can’t be all about you or no one will be interested. The real challenge is for businesses who aren’t directly connected to the music industry to find value and creative ways to use MySpace. And with no true “business profile”, it seems likely that most people will focus on personal use. But don’t let the opportunity to define yourself and your personal brand slip away. Be active, think about curating great music playlists that other people would be interested in, and show off your personality.

While the focus on music may help define MySpace, it should also present challenges for the struggling network as it attempts to assert itself into an already crowded environment. From Twitter’s #music to the new Google Play Music, options about for music lovers who want to discover new music and artists.

What can set MySpace apart is the potential to connect with artists in unique ways, beyond just sampling their songs. The success or failure of that platform may then hinge on how it’s used, not by regular users, but by artists.

If artists embrace the platform and spend time there cultivating a fan base and real relationships, the network could achieve a high degree of success.

MySpace is not simply counting on their few active users and some press coverage. They’ve launched an all-out blitz on both online and traditional media as part of a $20 million ad campaign designed to let everyone know: MySpace is back, and it’s cool. Check out one of the TV spots:

I’ve had a MySpace account since the beginning (here’s my new one if you want to connect), but I have to admit I never really enjoyed the platform. I can honestly say that I really like the new MySpace and I’ve enjoyed browsing and listening to music. It remains to be seen though how much real value I will get from it personally. What about you? Did you have a MySpace account before, and are you interested in the new MySpace? Do you think it will be a success?