The Live Broadcast Options Are a Mess!

The live streaming and broadcasting platform Huzza is being acquired by Kickstarter, and integrated into Kickstarter’s creator tools, which means it’s shutting down March 1st. 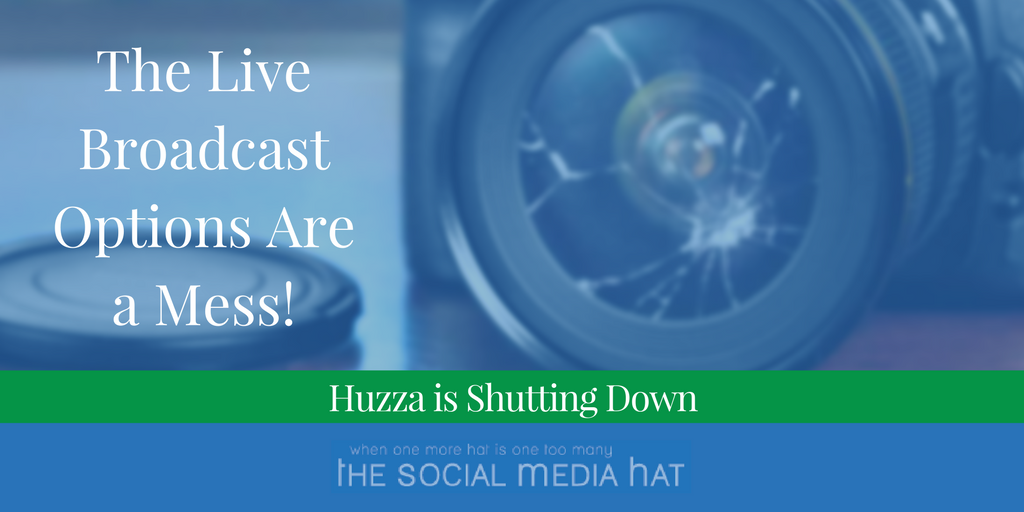 The news today, via Social Media Examiner & TechCrunch, is that the live streaming and broadcasting platform Huzza is being acquired by Kickstarter, and integrated into Kickstarter’s creator tools, which means that by March 1st, it will no longer be an option for broadcasters.

This follows the demise of Blab and, before that, the spin-off of Hangouts from Google+.

Hangouts are still an option, as is YouTube Live, but both lack the live audience & discoverability that enables broadcasters to achieve higher levels of engagement and virality.

To this day, the optimum solution involves additional computer systems, equipment and software to merge multiple Skype video or audio calls into a single video stream that’s then distributed to Facebook Live and elsewhere – not a cheap or easy arrangement, to be sure.

So who will step up?

Or will Google see the error in their ways and re-integrate a new & improved Hangouts into Google+?

Keep in mind, before Meerkat and Periscope and Blab… there were Hangouts – the real pioneers in the live video broadcasting space. It was through Hangouts that many entrepreneurs found a voice and a means to reach new audiences. Hangouts faciliated live interviews, panel discussions, and a vibrant community surrounding regularly broadcast shows.

While we wait for Facebook to further improve, or for Google to re-integrate, what are you other options?

BeLive.tv might be an interesting option. With that service, you and one other person can broadcast via Facebook Live. Or, alternatively, use Blue Jeans to broadcast multi-person, though for a substantial fee. You might also purchase Wirecast and combine desktop broadcasting with incoming video streams (i.e. Skype). None of which bring the ease that using an integrated platform like Blab or Hangouts did.

So of course, there’s the requisite warning: be careful which solution you select. If you cannot afford to invest in hardware/software that’s flexible, be resigned to the fact that any up and coming platform may not have the longevity you seek.

For those of you have been using Huzza, an Export Tool is to be released soon to facilitate saving and archiving of any data. Huzza is no longer accepting new users.

Have an alternate suggestion or question? Leave a comment below.