The gloves are off, Email VS Mobile

You are here: Home / Digital Marketing / The gloves are off, Email VS Mobile
Reading Time: 4 minutes 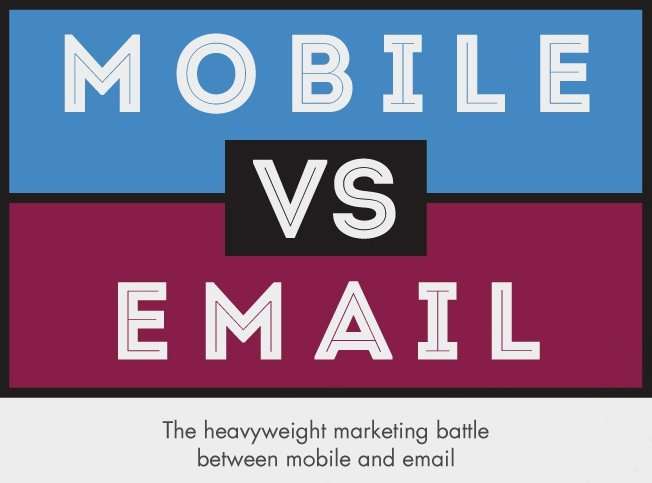 The big heavyweight fight, Email Marketing VS Mobile Marketing. If you’re wondering which is more responsive, more effective, more convenient and which is flourishing and growing, then this article hopes to answer some of those questions. There will be no sugar coating, no favoritism, or looking at things through rose tinted glasses. We’ll be examining just cold, hard, stats and facts to see which medium wins the battle for most effective marketing channel. Ding ding, round 1.

Before I start, this will not be an article where at the end you will find a pot of gold waiting for you, a simple answer of yes or no that will open up the doors of multi million pound sales. Every business is different, and every customer is unique, who thinks, acts and responds differently from the next. However you can look at stats and spot trends in the way things are moving to gain an understanding of what people want and what works well for other businesses.

Email marketing remains a very powerful and invaluable tool for small and large businesses around the world. With delivery reporting and analytics, pleasing designs, relatively low costs and the ability to send a piece of marketing material straight into someone’s inbox, it’s easy to see why it’s been so successful. There are a whopping 144.8 billion emails sent every day (Radicati Group), which is an eye-popping display of how incredibly popular this medium is.

But is this volume stat a real testament to how effective this channel of communication is? You could argue that email is effective or why would almost every business on the planet churn out so much of the stuff?  A valid point perhaps. My argument would be that the sheer volume of emails we’re all now receiving massively dilutes their impact and no matter how cunning or inventive they are, we’ve all become blind to the avalanche and hit delete almost before they’ve hit the inbox. The Radicati Group have calculated that 84% of all email traffic this year will be spam, which is an unfathomable amount of crap filling up our hard drives and wasting our time.

Tatango state that the average person receives 178 texts and 1216 emails a month. In my last article I published I commented that Frost & Sullivan research showed that 98% of all texts get read, compared to email read rates which stand at a feeble 22%. (I’m amazed it’s even that high.)

However mobile is still predominately in personal use and it’s early days for business SMS. So maybe we can’t judge that stat too much. On the other hand, is the astounding read rate of SMS highlighting a marketing channel that businesses big and small can take advantage of while it’s still in its adolescence? Can businesses start using this now and get a competitive edge over their competition, before it maybe becomes as spam filled as the email world? Service providers like Attentive SMS are definitely making it easier.

In the UK over 150 billion texts were sent in 2011 (Ofcom), with The International Telecommunications Union saying that there are 6 billion active mobile phones in the world at the moment, with that figure only growing. The Radicati Group report that there are only 3.6 billion email accounts in the world, the number of which are active is unknown. So mobile is more popular, but does that mean that it should be the preferred channel for business?

For personal communication, convenience and the array of applications, the number of mobile handsets will always outnumber email accounts. The mobile phone is now being used for activities that were once the domain of the desktop PC. 44% of people view their emails on mobile devices; while 33% open their emails on a desktop and 23% on webmail (Litmus).

With so many of us viewing emails on mobile devices this now creates a creative and technical challenge. How can we devise emails that will be responsive on both a PC and a much smaller mobile screen? It’s a challenge that marketers will need to rise to as consumers show no mercy and poorly presented emails are given no second chance.

According to Compuware 74% of people will only wait 5 seconds or less for an email to load, 69% saying that they will delete an email immediately if it does not display correctly (BlueHornet), and 46% say that if it doesn’t load properly they won’t return (Gomez). The internet signal on mobile devices is improving but you still can’t guarantee your site, link or email will load on their device correctly, and the reason could be as simple as their poor internet signal.

The pace of change in the marketing world is relentless. For example, in 2012, 51% of marketers ran campaigns just for mobiles, compared to just 11% in 2011. This highlights a genuine change in direction and one that we all need to pay close attention to.

Perhaps the reluctance of many businesses to get involved with SMS marketing is tied up with the worry of being seen as ‘spammy’ and potentially harming your business. The mobile phone is a very direct and immediate form of communication, with most people having an alert every time they receive a message. This can be seen as a good and bad thing, on one hand you have a message that is going to be delivered and read by your target customer in seconds. On the other hand you have the power to interrupt and disturb your customer during their day, which could be annoying. My feeling would be as long as they have signed up to receiving your SMS marketing messages, you send them at a convenient time of day and don’t hassle and spam them, then your message should be well received.

So has email marketing had its glory day? Is mobile marketing here to take over the reins? Well considering that while reading this, you’ve probably received at least two emails, then perhaps not. But is there a shift in power and balance coming? Is mobile marketing sneaking up behind to challenge email? Well we’ll have to see but all the facts and stats seem to suggest so.