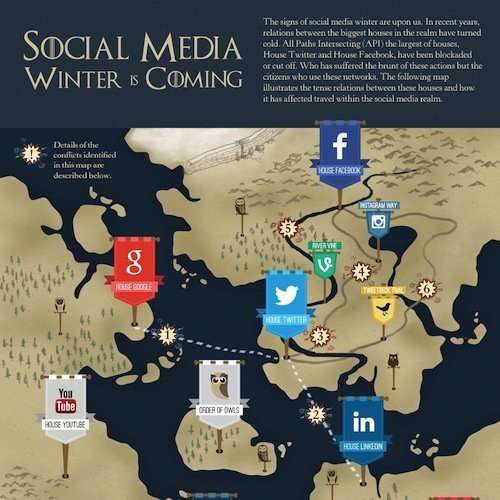 I first read and fell in love with A Game of Thrones back in 1998. I waited a year for the second volume in the series to come out, then another year for the third volume… after discovering that author George R.R. Martin decided to extend the series from a trilogy all the way to seven volumes… and waited five then six years for volumes four and five, respectively. I have also been a huge fan of the HBO series and while there have been differences, I think overall it’s been fantastic. But for those of you who have complained about waiting between seasons, try waiting for Martin to finish writing the next mammoth book.

My wife still recalls years ago, watching me read the books (back when I still read printed books), and how I would print out maps of Westeros to help me keep track of all the different locations and storylines. I used to use a particularly well-done color version folded up as a bookmark.

So, it’s no surprise that when I saw HootSuite’s work-up of their take on the Game of Thrones world as compared to Social Media and the major social networks, I was immediately impressed and interested. The infograph below is a clever analogy between the clashes between the Houses of Westeros, and the recent conflict between Twitter and Facebook and Google+.

A Storm of Swords

It all starts back in 2011, when House Twitter decided to refuse House Google further access to real-time search of tweets.

A Clash of Kings

So who are the Houses of the Realm? HootSuite takes us through the major players:

House Google – Information is power. The most resource-rich part of the realm, also has the largest library.

House LinkedIn – Everything is inextricably linked to business. The biggest network of merchants, labourers and tradesmen in the realm.

House Pinterest – The pin is sharper than the sword. The largest female to male ratio in the realm.

House YouTube – Where time disappears. Known for having the best entertainment in the realm.

House Tumblr – A picture is worth 1,000 words, a gif even more. Known for its unique, odd and at times shocking art and architecture.

HootSuite Order of Owls – Stronger together. Its owls carry messages between all Houses, unimpeded by blockades or battles.

A Feast for Crows

A Dance with Dragons

Martin’s series is actually called “A Song of Ice and Fire” which is a reference to the perils from the icy North, coupled with the fire of the dragons led by Daenerys Targaryen across the Sea. The phrase “Winter is Coming” is the motto of House Stark and refers to the unique seasons of Westeros. Summers and Winters last for years, and the Winters are very brutal, particularly for the Starks who live furthest to the North. It’s a saying that constantly reminds them that they need to be preparing and ready for the worst, even in times of peace and tranquility. As the story progresses, we certainly see that time of peace come to an abrupt and dramatic end, yet the fact is, Winter is still Coming. It’s still Summer for most of the Houses. Will it be that way with these social network Houses? Are we really just seeing the beginning of conflict and chaos?

As the infograph states, “the Order of the Owls provides safe travel between the houses. While you may not be able to cross post and easily manage all of the Houses individually, using HootSuite, you can avoid the conflict and be part of a uniting force. Join the order and be Stronger Together.

Do you think House Twitter most closely resembles House Lannister? Which social network is most like House Stark? How do you see this game of thrones ending?

Stay cool, calm, and collected during your virtual event no matter what.