I’ve shared my predictions for 2016 on a variety of guest blogs, but here’s a more cohesive presentation on where I see social media headed this year. 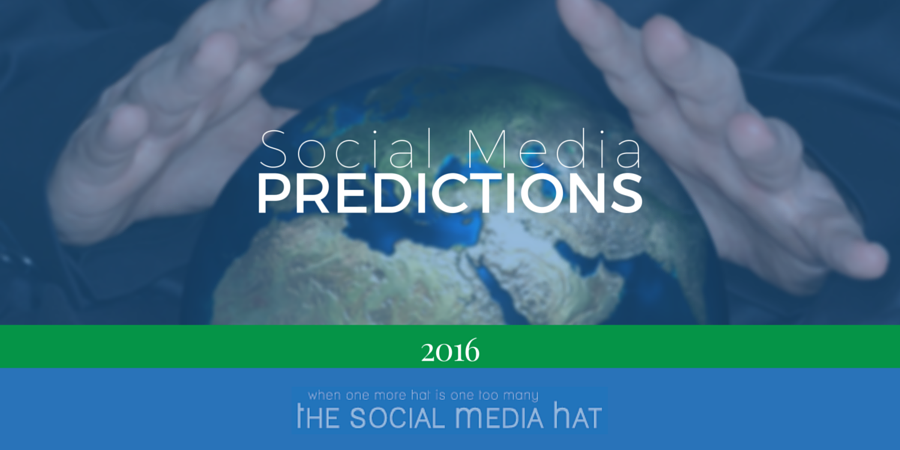 I’ve talked elsewhere about my predictions for this year, specifically with regard to the ever-changing social media landscape. Everyone wants to look ahead and try to discern what new trends or tools will emerge.

While ease of creation is making video more and more prevalent, my stated prediction has been a bit different than the rest.

In essence, I’ve stated that I believe 2016 will see a reversal of a trend that had been growing up until now.

Over the past twenty years, we’ve seen more and more social networks spring up that attempt to fill a perceived niche. Some, like Facebook and YouTube, filled that niche well and went mainstream. While others, like Tsu or Digg, have struggled to gain traction.

Each year, new networks would be released and throngs of people would check it out. The more high profile influencers the network is able to attract early on, the stronger their launch was.

Last year’s darlings were Meerkat, Periscope and Blab. And, not surprisingly, all were video-based.

If you want to create video and share it with an audience, you have the following social networks to choose from:

Plus a host of smaller networks and utilities. But assuming we were limited to this list, that’s still nine social networks to choose from and/or be active on.

Sure, they all have their differences and idiosyncrasies, but you still have options. If you want to focus on short snippets of video, you’ve got Vine or Instagram. If you want to broadcast yourself live, you’ve got Meerkat, Periscope and Facebook, whereas Hangouts and Blab are great for live groups. YouTube and Vimeo can take anything, and in fact, are often repositories for videos created on some of these other platforms.

If you’re wondering where to begin, and where to even go and find other broadcasters that you might be interested in, you’re not alone. Many of us learn about a new social network and cringe at the though of trying to learn something new and establish yet another audience.

Even those of us in the industry are often fatigued at the rate of growth in the market, and have zero interest in trying Ello or Peach or whatever else is new.

I purposely waited to see what would develop with Meerkat and Blab because I simply don’t have the bandwidth to keep chasing that next shiny. Though when I learned about Periscope, I was quick to jump in and check it out, as I perceived that network to have strong backing and a leg up on the competition.

But that’s really my point. All of these social networks are competitors, and we’re going to see attrition in the market.

There simply isn’t sufficient interest from users and consumers to support so many options long-term.

Millions have flocked to many of the latest networks to join the party. Some of those users were new to the scene, while others left previously established platforms.

Blab, for instance, has benefited heavily from Google+’s inability to solve performance and usability issues with Hangouts. Many former content producers who were using Hangouts every single week to broadcast live events have now moved over to Blab as an easier alternative, even with a reduced quality of output.

Google+ Hangouts, and really Google+ overall, is now struggling. When Twitter cut off Meerkat and days later Periscope was launched, that spelled the end of Meerkat. Now Facebook with their 1.5 billion users has been rolling out Facebook Live Video and now, in response, Twitter is integrating Periscope broadcasts into the stream.

2016 is when we’ll see breaking points. Social networks will begin to collapse under the pressure and there are going to be mergers, acquisitions, and shuttered products.

It’s certainly not unique, as we’ve lost social networks and platforms in the past. But seldom more than one or two over a given timeframe. In this case, I think the tremors will be harder felt.

Two very likely developments both involve Yahoo!, which continues to struggle. A couple of years ago, Yahoo!, under Marissa Meyer’s guidance, sought to turn themselves into a social network through the purchase and development of various products that were then built into Yahoo!, namely Tumblr. But those acquisitions have failed to turn Yahoo!’s ship around. So it’s likely that this year we’ll see Yahoo! divest both Tumblr and Flickr. Whether they live on under someone else’s leadership remains to be seen.

Del.icio.us, then Delicious, now Del.icio.us again – can a name change and return to an older codebase really revive this social dinosaur?

Will Google ever get their act together and give Google+ the interface it needs and the marketing it deserves? (Answer, no. Instead, Google has pulled Hangouts out of Google+ entirely, and now focused on launching a new video calling app called Duo.)

When Blab comes out of beta, will it simply take over the known universe? (Answer, no. Instead, Blab has completely shut down as of August, 2016.)

Which second and third tier networks will succumb in 2016? (So far: Tsu.)

These are the questions I’m pondering as we head into 2016. We know that video is big and is going to get bigger. We know that social media usage worldwide continues to go up – yet for many of us, the engagement from our followers is at all-time lows.

As social media consumers, we’ve reached capacity. There’s a finite amount of time that we, as a society, can invest in social networks, and I believe we’re about to see the tipping point.

What do you think? Are there other, more plausible trends that you’re seeing? What have been some of your favorite predictions or roundup posts so far? Gimmie a shout out in the comments below.