One of the most common questions from both businesses and social media marketers is “how many?” How many users. How many people. How many opportunities – for each of the social networks. Here are updated Active User Counts. 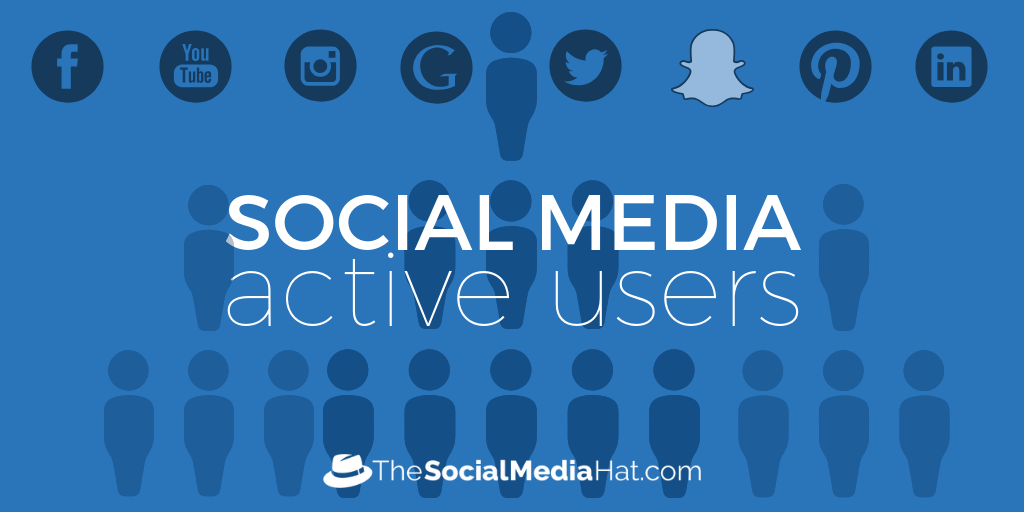 One of the most common questions from both businesses and social media marketers is “how many?” How many users. How many people. How many opportunities – for each of the social networks.

Of course each social network is different. Some have extremely high usage every month by hundreds of millions of users, while others the only numbers reported are registered members.

Are any of these numbers accurate? Nope. They’re changing by the second, literally, and of course there are always questions about how they’re calculated, how many fake accounts are counted, and so on.

Yet the fact remains, even with a large statistical margin for error, these membership numbers are extremely interesting.

For each network, we will indicate the date of the most recent accounting, as well as whether we are looking at active monthly members or just registered users. Below the top social networks, you’ll also find data for secondary or up and coming networks, like Tumblr, Periscope and more.

Facebook’s data is one of the more recent sets to have been officially reported by the company, and therefore can be considered one of the most accurate. And of course Facebook continues to reign as the largest and most active of all the social networks.

Finally, we have updated data on YouTube usage! The previously reported data was 1 billion monthly active users as of March, 2013. Thanks to a comment from YouTube’s CEO Susan Wojcicki at VidCon, we learned that YouTube’s usage had risen to 1.5 billion, and more updates have been released since. Adding 100+ million new users per year also shows that YouTube continues to grow at a faster rate than most of the other networks.

Instagram has been keen to report their usage statistics regularly, and with good reason. In March of 2014 they reported 200 million active monthly users, and by December they were reporting 300 million. After another 9 months, they’d grown by 100 million once more, and then again. Not only is that a stunning rate of growth, but that also puts them ahead of Twitter for the #3 slot among social networks.

Twitter continues to grow at a fairly steady rate, although there’s been a dip in reported users recently due to a crackdown on bots and duplicate accounts. The numbers are extremely fresh, so we can rely on them for comparison.

With the demise of Vine, we’ve now added Snapchat to the list of mainstream social networks! While Snapchat prefers to report on average daily user count (188 million) due to their monetization model, we’ll continue to compare with the other networks according to the last reliable MUA.

Pinterest added more than 25% to their user base last year. As the network adds additional features and more advertising support, we should expect that growth to continue.

Of all of the social networks, LinkedIn is the oldest and perhaps the least rapidly growing, though leadership has been making an effort over the past year to change that. Between the news integration of Pulse and the recent ability to publish on the platform, LinkedIn is hoping to spur both growth and daily usage.

As a Microsoft holding, LinkedIn is included in Microsoft’s Earnings Reports, and it’s been stated that LinkedIn’s total membership has risen to 575 Million Users. However, Monthly Usage has not been updated. It’s currently estimated that more than 250 million users now access LinkedIn monthly, but that is unconfirmed.

In a shocking announcement, Google confirmed that not only has Google+ usage been ridiculously low, it’s so bad they’ve decided to shut the entire network down. Like Vine before it, millions of Google+ users are left scrambling to find someplace else to hang their hat and call their virtual home. While growth of the network was strong in the early years, Google failed to properly market or leverage the popularity of the network for anything other than data accumulation, which led to a variety of issues. Google+ is scheduled to be shut down on August 31, 2019, giving those users time to sort out their plans, and giving us time to figure out what network should replace Google+ in the Top Eight Social Networks.

For reference, virtually every network agrees that an active user is one who took some action within the past month. And for some of the networks, that includes actions that can take place off-site, such as Liking or +1’ing a blog post. So if you’re wondering how many people are logging into a particular platform and looking at the stream of content being generated by the accounts they’re following, those numbers are lower still. And almost none of the networks even try to report them.

Furthermore, to clarify, the numbers for Google+ do not include YouTube or Gmail or other Google accounts or services.

And that’s it! All of the major social networks, plus a few others thrown in for fun.

Every month, if new data is released, I will update the numbers and the graphics accordingly.

If you’d like, here’s one compilation infograph that you can Pin to Pinterest just by mousing over it and clicking the Pin It button.

If you’d like to embed the graphic on your own blog post, here’s the code for you (and if you embed this way, it will automatically update with new social network user counts each month):

Please include attribution to thesocialmediahat.com with this graphic.

What Does This Mean To Businesses?

As a business owner, while you might be tempted to target the social network(s) with the highest number of active users for your social media marketing, that’s not how I would recommend proceeding. I’ve assembled this data, partly because it’s fun and entertaining, and partly to illustrate that if you execute an effective social media marketing campaign, it shouldn’t matter which network you select.

Take LinkedIn, the low man on the totem pole, with just over 100 million monthly users. What business wouldn’t want to market to 100 million potential customers? If you can position your product and services, and brand yourself in a way that makes sense for LinkedIn and those users and that kind of content – DO IT!

So data like this really isn’t meant to drive business decisions with regard to social strategy. That should depend on more specific demographic data, along with a clear understanding of what your brand represents, and which platform or platforms is best suited for communicating that kind of brand. If that’s the kind of decision you’re struggling to make, consider joining the 360 Marketing Squad. Jenn Herman, Stephanie Liu, Amanda Robinson and myself would love to help you create a sound social media strategy, and share with you the tactics we’ve used to achieve success.

What do you think of the numbers themselves? Any surprises? Did you realize how active Pinterest really is?