Should Google+ Be a Digital Marketing Priority? 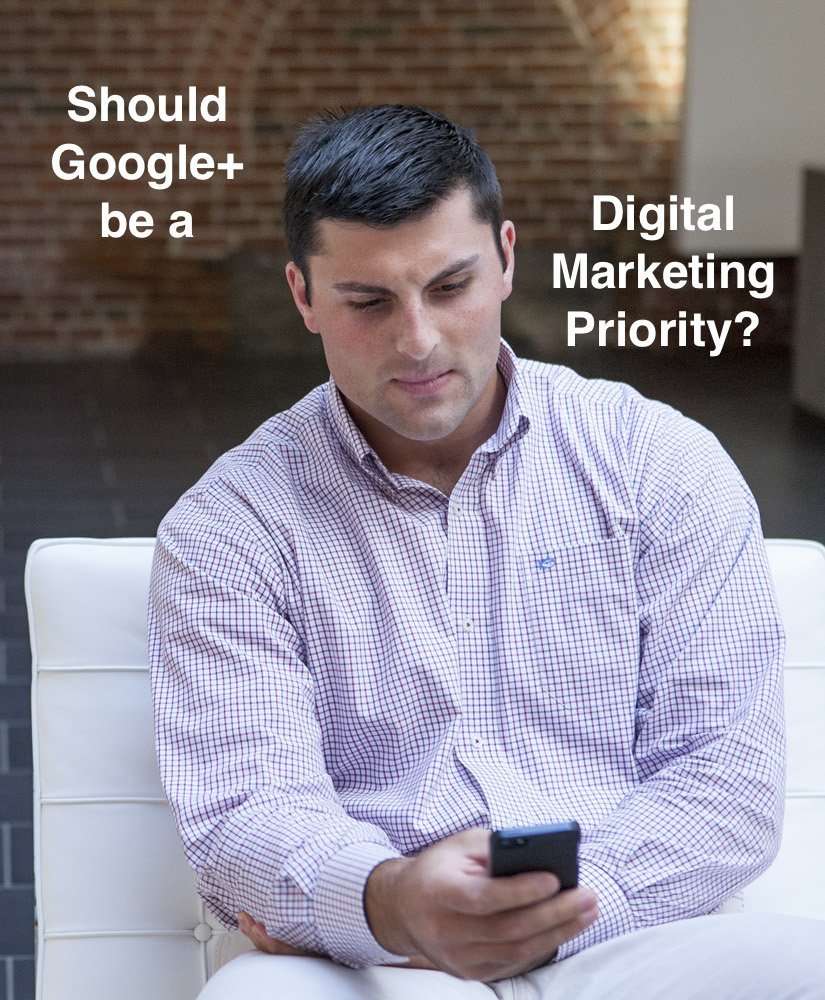 In a recent study by Shareaholic, it was stated that traffic from Google+ is a fraction of that from Facebook, Pinterest and Twitter. Shareaholic is a social sharing widget, and the report was based on their sharing data from over 200,000 publishers between Sept., 2012 and Sept., 2013.

Earlier this year, a similar report was issued from Gigya.

Yet many publishers, myself included, would report that not only is Google+ driving significant amounts of traffic – it’s often the top referral source for website traffic. Why the discrepancy?

And even more important, the author of the report states that, “there is a lot of conflicting data relating to Google+’s relevance as a social media platform. Our data suggests it probably shouldn’t be a top priority for digital marketers.” Do you agree with that, or do you think Google+ really should be a priority?

Let’s dig into why the data is saying that Google+ isn’t a good referral source, and then go over whether or not Google+ should even be a priority. We’ll also cover how to actually increase referral traffic from Google+, if you aren’t already doing well.

Topics – What People Are Talking About on Google+

It’s been said that Google+ is mostly for geeks and techies. And while that may have been true at one time, it’s a reality that’s quickly changing. More and more athletes, celebrities, musicians, small business owners and individuals are adopting Google+ each day. But you don’t have to take my word for it. Just take a stroll through some of the Google+ communities and you’ll find thriving groups of photographers, artists, scientists, businessmen and more.

But is there still a lot of truth here? Is Google+ sending referral traffic mostly for techie related content only, still? Perhaps.

Sharing to the Search Engine

Unlike Facebook or Twitter posts, anytime someone shares a post to Google+, that post is quickly indexed by Google and can potentially appear within search engine results. That means that people may find publisher’s articles via search results and click through to the original article. If the article was shared using Shareaholic buttons, it might still be tracked and included in the Shareaholc data set, but if not, it might be referral traffic that wasn’t included. More on why that’s important in a moment.

Of course, the entire article is based on usage of the Shareaholic share buttons. If you’re not among the 200,000 Shareaholic users, that may be because you’re using native buttons from Google+ and other platforms, which many people do. One of the flaws in using share widgets is that you have less control over appearance, and displayed data like +1 counts can be inaccurate.

In fact, Google happens to throttle share data. Whether it’s for performance reasons or for data security, it doesn’t matter. If you install Shareaholic buttons, as I recently did myself, you’ll find that they don’t even pretend to be able to offer Google+ share counts, as they do for Facebook, Twitter and LinkedIn. If Shareaholic cannot accurately display +1 counts from Google+, how accurate is the rest of their data? The argument they’re trying to make is with regard to referrals – how many times someone clicked through to your blog post from Google+, yet it would seem that the only reliable data they have may be how many times a post was shared to Google+ through a click of their button.

To demonstrate the virality that my content has on Google+ as compared to other networks, I’m going to embed a native Google+ button right here, and you can check back in a few days and see how this post is doing as compared to the networks and judge for yourself.

And of course there are many, many sharing buttons offered by other third-party providers like AddToAny and ShareThis and Po.st and more. I have personally tried a bunch, and none of them have accurate +1 counts. But they all do facilitate sharing, and that’s what most publishers are looking for, so they often install whichever button set is easiest or seems to match their site the most.

Finally, there’s the issue of the premise of the article. The data for the report is based on the following factors:

1. Shareaholic user base of 200,000
2. Instances where readers used a Shareaholic button to share an article

The article does not reveal how the ratios were calculated. The findings claim to be an analysis of all of the referral traffic to the 200,000 publishers over the course of the 13 month data set, but it would seem that such results would have to be limited to links shared using the tool, and by no other means. In other words, if I were to share an article using HootSuite, Shareaholic would be cut out of the picture and have no insight into the resulting traffic from that share.

But despite these inherent flaws in the analysis, the author goes on to suggest that Google+ is not yet competitive and that it shouldn’t be a priority for digital marketers.

How do I improve Google+ Referral Traffic?

Before I jump into how you can improve your own Google+ Referral Traffic, let’s take a step back and review why I have taken such a strong stance against this article and their position on Google+.

First, I believe the author is biased against Google+. Even if the resulting data is 100% accurate, if you read his conclusions and remarks regarding LinkedIn and then Google+, you’d believe that LinkedIn is a phenomenal tool for marketers and that Google+ isn’t, yet their average referral share ratios over the 13-month period were .07% and .06% respectively. To be fair, he does qualify his remarks, but he still heavily favors other platforms that, while ranking higher, are statistically not that far off.

Second, my own experience and that of many of my peers and clients has been completely opposite. Facebook is one of the worst referral sources for TheSocialMediaHat.com, while Google+ is a powerhouse.

The problem, of course, that many publishers and businesses fall into is that of relying on past success. If you’re already using Facebook and it’s driving traffic to your site, shouldn’t you continue to do what you’ve been doing? I have achieved a lot of success on Twitter and Google+, so shouldn’t I continue to work those platforms? Why add other platforms to the mix and potentially create more work for myself?

So to an extent, studies like these should come as no surprise. Google+ is still the new kid on the block, and many businesses still haven’t established a presence there. How many blogs and businesses don’t even have Google+ share buttons on their site and posts yet? I know quite a few.

The thing is, Google+ is not StumbleUpon or Reddit or even LinkedIn. As Google recently revealed, Google+ now sports over 540 Million active users within the past month, and sees over 1.5 billion images uploaded weekly. If you still think Google+ is hardly used or visited, and that there’s no opportunity there for businesses, think again.

So, assuming you’re not already getting good results from Google+, what can you do to get more referral traffic?

Make sure that every article and blog post on your site has easy-to-use sharing buttons for Google+ and each of the major social platforms. I recommend using individual buttons for the major sites, rather than one “share bar” button, as the individual buttons encourage more sharing. I also recommend using buttons above and below the post, though I do suggest using smaller buttons at the top so as not to be too intrusive.

Furthermore, if you can, put a site-wide sharing button on your home page, and make sure that you have a Google+ Badge on your site that’s linked to your Google+ Business Page. Not only will this encourage visitors to +1 and Circle your Page, but it also automatically verifies your Google+ Page.

b. Circle other interesting people and engage them through their posts.

d. Promote your Google+ profile just as you would your other social profiles.

Due to the nature of Google+ Circles and Communities, even the most targeted, niche businesses and websites can find great followers and potential customers through the platform. Do not dismiss it! Give yourself a 60-day challenge. Spend a little bit of time every day working on improving your Google+ profile and activity and see what happens. Ask questions and continue to improve, and then look back and see if your follower count, engagement levels, and website traffic referrals have improved or not. I am not saying that Google+ is the perfect network for every business, just as I’m not saying Facebook has no value for every business – you need to find out for yourself which platforms are going to work, and then continue to test and improve. Even though Facebook is my #4 referral source, at best, I’m going to continue to look for ways to improve on that and get better – I want all the traffic and business opportunities I can get! Don’t you?

So don’t let reports like Shareaholic’s skew your mindset. Even if the data is completely accurate, the conclusions are not. Google+ absolutely should be a priority for digital marketers and businesses. Google+ is a gold mine of opportunities for businesses. Don’t pass it up.

Editor’s note: the author of the original article, Danny Wong, asked to clarify some of their findings and respond to some of my points. He had this to say:

With regard to Shareaholic being unable to access Google +1 data, “Google+ doesn’t have an API for share data. This is a minor detail though, given that our study tracked referrals to sites, not shares. We track referrals using analytics on Shareaholic-enabled sites. The way we track referrals is similar to how GA does it.”

With regard to Shareaholic being unable to track referral traffic, “This is inaccurate. The data we track is WHERE an incoming visit came from. An individual may share your post on Google+ manually (without using Shareaholic buttons), and any clicks that link receives is tracked as referral traffic. “

When I asked Danny to expand on how Shareaholic is able to track referral traffic to user sites, he responded, “Enabling our tools does provide us with data regarding incoming traffic, but we do this anonymously (akin to Google Analytics). Also, users can freely opt-out. In our reports we report aggregated data with user privacy / safety in mind. We are not reporting or highlighting any individual publisher’s stats”

Based on Danny’s responses, I’m satisfied that Shareaholic is able to retrieve and analyze the relevant data necessary to present the statistical findings that they did. My remaining objections then are limited to whether or not their user base is an adequate sample to apply to the Internet on the whole, and the conclusions reached within the original post.