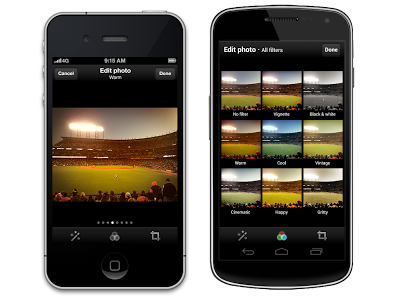 Yesterday we reported that Instagram had completely disabled support for embedded Twitter images, which resulted in previous tweets containing Instagram images to no longer have an image – just a link to the image on Instagram. It has been known for months that Twitter has been working with Aviary to implement their own Instagram-like filter system. While their initial timeframe is not known, it is assumed that when Twitter released the ability to apply filters through the web-interface yesterday, it was done so in direct response to Instagram’s actions over the weekend.

According to a blog post from Twitter, this feature is supposed to be available on both iOS and Android as well, though as of this writing there was not yet an update for my iPhone. There are eight filters that can be applied, and you can choose to see what your photo would look like with all eight different filters at once in a grid view. You can also crop and zoom your photo and try out the light enhancement option. However, there is not yet any indication of a tilt-shift feature which might allow you to blur/focus aspects of your image.

UPDATE: There’s a new update available now for the Twitter for iOS app.

Instagram’s CEO Systrom’s last tweet over the summer read, “Sometimes you need an axe.” That was just before his company was acquired by Facebook, and he hasn’t tweeted since. It seems clear that Instagram and Facebook determined that allowing users to post content directly to a rival social network with no need for viewers to return to their own networks was not profitable. Twitter made the same move earlier this year with LinkedIn. It might be argued that Twitter fired the first shot when they disabled the ability for Instagram users to find friends throgh their Twitter connections. What’s not clear is what impact this will have on the actual user experience.

From a small business perspective, this is exactly what business owners did not need. The fact is that content that contains an image is more likely to engage viewers than content without. So, business owners have been making a concerted effort to create and use images in their content marketing strategy. Having a tool like Instagram that could post an image to both Twitter and Facebook at the same time was extremely valuable, and now that value is dimished significantly. Do I just post my images straight to Facebook and Twitter and skip Instagram altogether? Do I use Instagram to edit the image, and then post it to Twitter separately? Either way, this has placed an extra step into the equation. While it’s not likely that this photo war is over, we can only hope that further developments will result in actual improvements for the user experience, and not just profit-mongering from the social network giants.