Not every natural event will have the same widespread interest as the 2017 Solar Eclipse, yet examples of great newsjacking marketing during the event can help every business.

Newsjacking is one of the favorite marketers’ tactics. By piggybacking an event everyone’s talking about you can attract attention towards your brand and earn some relevant traffic.

This Monday, everyone’s attention was directed towards the sky. The “Great American Eclipse” was the first eclipse visible across the entire contiguous United States since 1918. Many brands couldn’t help covering an event that last happened almost 100 years ago. Let’s see some most prominent examples of how they did it.

Archimedes said, “Give me a lever big enough and I can move the Earth.”

20th Century FOX creators went even further and announced to have moved the Moon for the Kingsman II premiere. Literally.

The main idea of the promo was that the August 21 eclipse was not a natural phenomenon, but a special campaign for the release of the 2nd Kingsman episode. In order to support the concept, the studio was offering special sunglasses for watching the eclipse (with one eye blacked-out) and promoting it through all possible media and social networks. 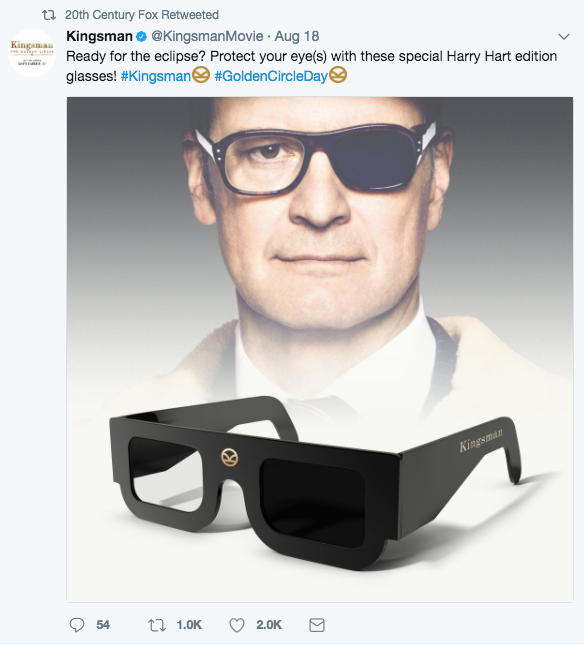 In a video about the campaign, the creators are also explaining how the concept was born:

It’s become a tradition for Google to name its Android OS after chocolate bars. This time they went for Oreo. The new OS was released exactly on August 21, and this is unlikely to be a coincidence: there is probably no other funny yet recognizable symbol but a round dark biscuit with a white filling.

Along with dedicating a whole OS to the event, Android is also widely promoting it via social media. A dedicated hashtag #AndroidO was created for the eclipse livestream, collecting thousands of mentions across different social networks.

SEMrush, a digital marketing analytics toolkit, has covered the event by making an eclipse directly in its interface. In both Social Media Tool and Brand Monitoring tool, one of the O characters was redesigned in a form of the sun. And here’s what was happening after the user hovered the mouse over it:

Some useful tips were also added to the interface, to remind users about the safety measures during the eclipse while their data was being collected or updated:

To spread the word about this interface tweak, some tweets and Facebook posts were created.

Snapchat used the eclipse to show off their recent Snap Map feature.

For the first time the Snap Map’s Actionmojis were tied to an event: all the Snapchat contacts who were physically located in the path of the eclipse’s “totality” appeared wearing sunglasses and looking towards the sky. Special geofilters and stickers were also available during the whole period of the eclipse.

No matter the size of the business, a natural phenomenon can be successfully used to raise brand awareness. Unfortunately, in case you have just come up with a brilliant eclipse-related idea, you’ll have to preserve it until April 2024, when the next total solar eclipse happens in the US. However, worthy events pop up literally every day, you just need to harness them smartly and with lucid mind.