Naming the Nameless: Google’s Quest to Deal in Real Names 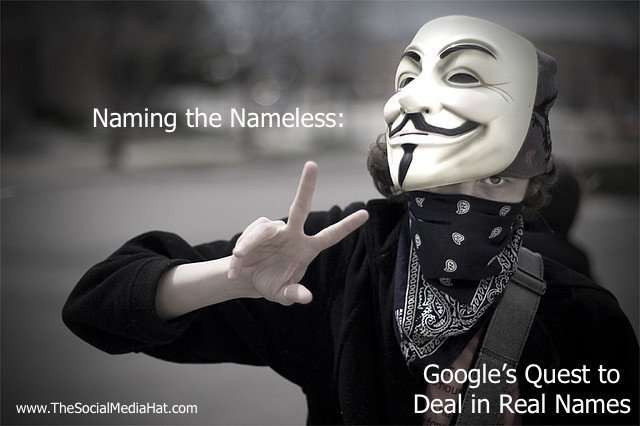 Anonymity has always been a staple of the internet. But Google would like to change that. In October it was announced that in order to use Google+, Google’s social media platform, you have to use your own real name. Not a pseudonym (though this policy may change). This has been a point of contention with Google users for over 2 years.

But then Google said this month that you need to use your Google+ account (the one with your real name attached) to comment on YouTube comments. Essentially, your name will be attached to every comment you make.

This could be the beginning of a larger trend wherein corporations compel you to use your real information to access their services. If it is, there are some obvious advantages and drawbacks involved. Some say this is the way to a better online future while others say that it’s simply evil.

Let’s take a look at some of the pros and cons if this really is what we can expect.

Aren’t you guys tired of 12 year olds talking smack about you? I know it isn’t just me. Oh, my post is stupid? Come out and say that to my face, you punk. I get so tired of seeing hatred and ignorance spewed underneath every YouTube video- it’s as though the most hateful and creepiest of humanity have gathered to comment on benign talents that people wanted to share.

More saliently, aren’t you tired of hearing about preteen cyber bullies? Sometimes it seems that the next generation will feel completely detached from the repercussions of what they say. It would be so nice to require sociopaths to identify themselves as they’re making others miserable.

I really feel that we shouldn’t design internet policy around protecting people’s feelings. Aggravated stalking charges have started being brought against cyber bullies as real-world repercussions for serious harassment. For everyone else, I sympathize with your plight dealing with mean-spirited trolls, but you can choose not to read the comments they make.

Of course the best exchanges end with the troll being outwitted, so please keep bickering. I, myself, generally find it fun to read the varying verbal battles that occur on social media. To be honest, though, we might find ourselves with much less hilarity in the long run. This is because…

No one will be making quite as many posts or comments or statements in general if they’ll be held to every word they say. “So what,” you might be thinking, “we’re held accountable for everything we say offline.” Well, no, we’re not. Nothing on the internet goes away- Beyonce’s publicist can tell you that. Someone, somewhere, sometime can connect you to pretty much all of the activity you enact online. The equivalent would be to have a recorder pick up everything you say every day. It would be nerve wracking.

More importantly, imagine that you’re having a crisis, perhaps about an ethical problem at work or perhaps about your sexuality, and would like to seek advice of people online who have been through this experience. If your real name is attached to your comments, there’s a very good chance that you won’t reach out after all. Very few people would want their pursuit of help on serious matters to be broadcast to their peers and families.

On a lighter note, consider a hypothetical user, HamMan57 AKA Doug Smith, who has regrettably gotten hooked on the music of his daughter’s favorite boy band. Does he risk his coworkers noticing on his Google+ if he comments on their newest video? Maybe it would be cathartic for everyone to get to know and accept this facet of Doug’s musical tastes. Maybe it will be the beginning of the One Direction fanclub at the office. It could radically shake social norms if we knew what people were actually like. Maybe we could stop pretending that we don’t enjoy things and be honest. (Note: I do not like One Direction. Just making an example.)

It’s never been so easy to make sure everyone’s on the same page on a team or in a family. At work, especially, it makes sense to be able to share things reliably and professionally. No keeping track of endless pseudonyms and easy access to all of your teammates’ posts and ideas.

You know who else you could becoming more interconnected with? People you really, deeply dislike. Maybe they’re people who were mean to you in high school, maybe they’re identity thieves. The point is that we don’t want to connect with everyone and it makes it more difficult to guard your identity if you need to use your real name even in places like YouTube.

Let’s just think for a minute about how important the use of social media has been in organizing protests. If you’ve even so much as protested the sub-par options at your college’s cafeteria, odds are that you coordinated with your cohorts via some form of social media.  Now consider how important social media was on the larger scale of the Arab Spring, where political regimes were changed by the power of cooperation.

If you have any doubt that speaking out for social change sometimes legitimately needs anonymity, remember that in Mexico there have been instances where people have been hunted down and executed by cartels for daring to use social media to denounce gang activity. Not everyone has the luxury of speaking their mind in safety.

This is to say nothing of the impact that forced use of real names might have on stalking victims. The overtly sexual and oftentimes threatening nature of comments online, particularly to women, can become so much more real when your aggressors have your real name. If you think having your aggressors’ real names will be enough to stop harassment, you’ve got another thing coming.

Nope. No “and yet” here. Anonymity is sometimes the best- sometimes the only- defense that agents of social change and victims of harassment have. Forcing users to use their real names is not a welcome trend to those who need to hide their identity in order to spread their ideas or to simply survive.

The bottom line is that Google is trying to force us into using its social media platform. Its business is to gather data and direct traffic, so it shouldn’t be surprising to hear that this is the way Google is herding us. The question isn’t whether or not they should be implementing these policies but rather whether the effects of them are tolerable.

The beauty of the internet is that there will always be alternatives. If Google+ starts insisting on being involved in all of my online ventures, I for one will be opting out and finding a new platform. They’ll cross the line for me if they start posting my Google search terms.

Where’s the line for you?

Tools & Tactics To Make Your Virtual Trade Show A Success