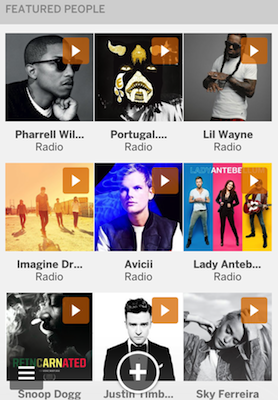 First, if you didn’t catch the news, there’s an all-new MySpace and it’s focus now is on music – connecting you with different artists and albums and genres. And timed with the launch of the new MySpace was a new MySpace app that does a very nice job of duplicating the functionality from desktop to mobile. You can connect with other people and artists, see updates and upcoming events, and even stream music.

And that takes us today’s update. MySpace has released an update to their app that adds Featured Radio Stations. Now, in addition to streaming music from a radio station according to genre, you can also stream tunes curated by your favorite artists.

Now, before we get into any more details about the update, some of you may be wondering how MySpace can possibly compete with the likes of Pandora or Spotify or even Sky.fm. The thing is, MySpace has been strong for music and artists for years. According to Pitbull, “Myspace [has] been there since Day One and helped me a whole lot on my independent grind and helped build a tremendous fanbase and foundation. It’s great to be here riding this thing together with God’s help.” And according to MySpace.com, there are currently over 14 million artists on the site, with over 52 million songs, and over 13,000 new songs uploaded daily. That’s a pretty impressive collection of music and artists, don’t you think?

So, getting back to the update. If you download or update the app and pop it open, tap the three bar icon in the lower left to access the menu and you can then tap on Radio. You can now stream all kids of music, and the first few selections are artist compilations and curated songs, followed by genre stations. You can play or pause the stream without any commercial interruptions, and even skip up to 6 songs (the limitation is part of the licensing agreement between MySpace and labels). When playing music, you can do anything else you want with your iPhone just like if you were using the Music app. And the current song even shows up in your lock screen along with player controls.

The update also gives you the option to enable or disable animated GIFs in your stream, as well as providing the ability to view all of your old (classic) MySpace photos. The app is currently available only for iOS, with an Android version coming soon.

Check out the new MySpace and the updated app and let me know what you think!

Previous Post: « If Less is More, How do we Explain (to our Boss) How Much Time We Spend on G+???
Next Post: Mobile Google+ Notifications Get Awesome »