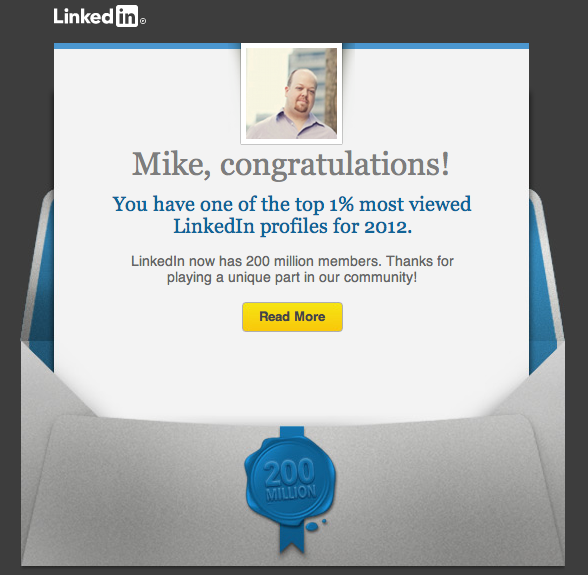 You may have received or read about the emails that LinkedIn is sending out. To “celebrate” reaching 200 million members, LinkedIn has sent a series of emails out to select members, congratulating them on an achievement and thanking them for helping to build LinkedIn to what it is today.

This morning, I received mine, with LinkedIn congratulating me for being in the top 1% of profiles viewed. I assume the same exact message was sent to me and 2 million other LinkedIn users. I do know that other people have received emails that were somewhat different, so “profile views” was not the only category, and the percentages varied.

If you click the Read More button, you end up on a LinkedIn page with a nice letter from Deep Nishar, Senior Vice President, Products & User Experience. The page includes a pre-written post that you can share to Twitter, LinkedIn and Facebook mentioning your new-found fame.

To most observers, this is a simple email marketing campaign, perhaps as a response to recent statistics indicating LinkedIn’s monthly activity is not nearly as high as other social networks. Kred issued a similar campaign recently to users who had hit 1%, 5% and 10% levels.

As a marketing technique, I find this interesting. LinkedIn has obviously decided to stroke my ego a little bit, but they’re not inherently asking for anything in return. They’ve provided me with some canned messages for social media which, presumably, would advertise LinkedIn a little bit to those I’m connected to.

So, LinkedIn gets to create a little buzz, generates some immediate activity, and potentially makes some users feel special. Is this a good long-term marketing strategy?

Buzz is obviously very short-term. No one is going to be talking about their “achievement” for long. It’s also not the kind of topic that could even potentially expand beyond the initial individual. I dutifully tweeted the message LinkedIn provided, and I’m sure some of my Twitter followers noted it. I have not, however, received any retweets or favorites, and don’t expect to. Since there’s very little context with this 1% number, why should anyone else care?

Perhaps most troubling is the idea that LinkedIn was making an effort to stroke my ego. This is a dangerous technique for marketers. If you’re not careful, your users will come to expect this special treatment, and then what happens if you stop? This is actually nothing new from LinkedIn. Take a look at your profile and look at the right sidebar. The old profile completeness percentage has been replaced with a graphic that describes your profile. Apparently, I am a LinkedIn All Star, at least according to my profile gauge. i know people personally who are far better and more advanced at LinkedIn than I am, so I honestly question the validity of this label. And again, there’s no context. How is this label measured? What exactly makes my profile an All Star?

It seems to me that, while well-intentioned, this is yet another “scheme” from LinkedIn to try and boost their numbers. I would much prefer to spend more time on developing and improving the platform. What do you think? Was this a brilliant marketing move, or just another brainless ploy to increase activity?

Learn how to employ this tactic for effective virtual events.