Is Social Media Making Us More Like Psychopaths? [INFOGRAPH] 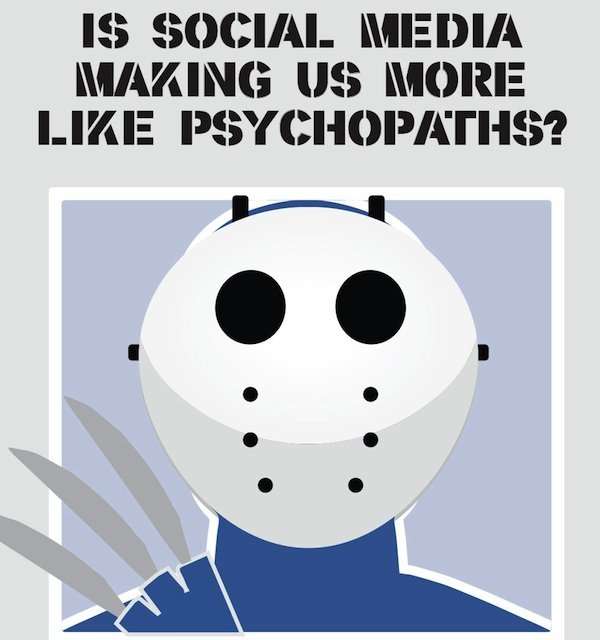 When most people think about psychopaths, they envision the likes of Michael Myers from Halloween or Jason Voorhees from the Friday the 13th films. Starting with Friday the 13th III, Jason started wearing the now iconic hockey goalie mask as he terrorized his victims.

The truth, though, is that psychopaths aren’t running around wearing scary masks, announcing their psychosis and deranged behavior. Some might say that they’re all around us.

In this… interesting… infograph from whoishostingthis.com, we will explore the darker side of our nature, and how social media may seemingly be reinforcing those psychopathic tendencies, including four key traits.

It’s probably no surprise to learn that some people lie about themselves online, but according to a survey by Huffington Post, a shocking 1/4 of the more than one billion Facebook users have likely falsified something that’s stated on their account, and 20% had lied about their holiday activities or even their jobs.

Using our smartphones and checking social media during dinner and other real-life events has also become commonplace. So much so that we make fun of it in our popular culture of film and television. Yet the question remains, what affect is this activity having on our real live socialization? Are we becoming more disconnected with the real people in our lives, in favor of the virtual people we’re connected to via social networks? When 24% of us miss real life events because we’re too busy trying to talk about it on social media, that’s telling.

One of the clearest traits of a psychopath is their focus on themselves, to the point of excluding all care or interest in the well-being of others. Are we approaching that level of self-centeredness with social media? According to the data, we normally might spend as much as 30-40% of our real life conversations talking about ourselves, but when we’re on social media, it’s all about me, with a stunning 80% of online conversations revolving around what I’m doing or thinking about.

Finally, because social media is disconnected and remote, it seems some people find it even easier to ignore the personal restraints they might otherwise use and exert themselves onto others in the form of cyber bullying and confrontational online behavior. 42% of young people have reported being the victim of cyber bullying, and that number is rising.

So 51% of people say that social media has not changed their life for the better. What do you think? Has social media improved your or others’ lives, or is it encouraging these negative, psychopath traits?

Previous Post: « The New MySpace is Live. Is it Cool?
Next Post: Google Hangouts Powering the Future of Conferences: #TFT13 »