Reading Time: 4 minutes Find out whether or not it’s possible to tweet too much, and what happened when I increased tweet frequency by 66%.

You are here: Home / Social Media Articles / Is It Possible To Tweet Too Much?
Reading Time: 4 minutes

Twitter is an interesting animal. So different from the other inhabitants of the Social Media zoo. So different, in fact, that many of the norms and mores that apply elsewhere are entirely different, even backwards, on Twitter.

Spelling? Punctuation? Those are optional in status updates where characters are at a premium.

Want to share links to your posts, even old links? Knock yourself out.

But what’s really interesting is when people start to talk about how often you tweet. “How often should I tweet?” is usually the first question from a new client, followed closely by, “Can I tweet too often?”

My response is always based on that client – who they are, how old their Twitter account is, what they’ve done so far, who their audience is – those kinds of factors. Essentially, I advise that clients start by tweeting just a few times a day and then gradually increase volume.

Now, for most small businesses, that “volume” may never exceed 10 – 12 tweets a day. Just a few months ago, a client asked me how many times I tweeted a day and when I suggested it was over twenty-five times, they were shocked. They were terrified that if they tweeted that often, they’d scare off all their followers.

You see, on Facebook and LinkedIn and Google+, if you were to post that often you probably would annoy your friends, but not so on Twitter.

Twitter moves faster than any other network. It used to be that the lifespan of a tween was measured in hours but I read recently that the half-life of a tweet is down to just 18 minutes. That means twenty minutes after you send a tweet, more than half of the people who are going to see it have already seen it.

This is partly due to the way the Twitter stream works, partly due to the volume of tweets being sent out which pus down other tweets in the stream, and partly due simply to user behavior. Most people do not spend hours poring over their Twitter stream (unlike Google+, where some have been lost for days). Instead, many users will jump into Twitter or pull up HootSuite on their smartphone and scan a bit, then move on to something else.

So, with that understanding, we’re back to the essential question, is it possible to tweet too much?

While I’ve probably clued you in already to my opinion, allow me to give you some actual data to consume, based on my own test.

But on April 18th, I decided to make a change. Most of my Twitter activity was sharing old, evergreen content from my archive via Buffer, but that meant that every few weeks I needed to refill my Buffer queue with those same posts. I decided to check out SocialOomph (affiliate link) and found that I could create a reservoir of tweets that would be shared and then placed back in the reservoir. Since I have close to 400 articles in my archive, this was a tremendous find! I took the time to create each individual tweet and article share in SocialOomph, connected both my personal and my branded Twitter accounts (@Mike_Allton and @SocialMediaHats) and set up a schedule for each.

Instead of 12 posts per day, during “U.S.” hours, I decided I wanted to take advantage of my growing global audience and tweet 24/7. I set a schedule to tweet every 45 minutes, which results in 32 tweets a day. With my other Twitter activity remaining the same, that’s almost twice what I was tweeting before.

Was I going to be in trouble?

I have to admit, I was a bit nervous. I made sure that my HootSuite analytics were in place for my Twitter account and then sat back and watched.

The results were scary at first, but then ultimately quite gratifying.

My fear, of course, was that I would lose followers. When I started the experiment I was at approximately 10,976 followers. Within the first 24 hours, that total dropped – I lost a net 6 followers. But the next day I gained a couple, and then a few more after that… and then a bunch. Ever since that first dip, my follower count has risen an average of 4 new followers a day, and continues to rise. 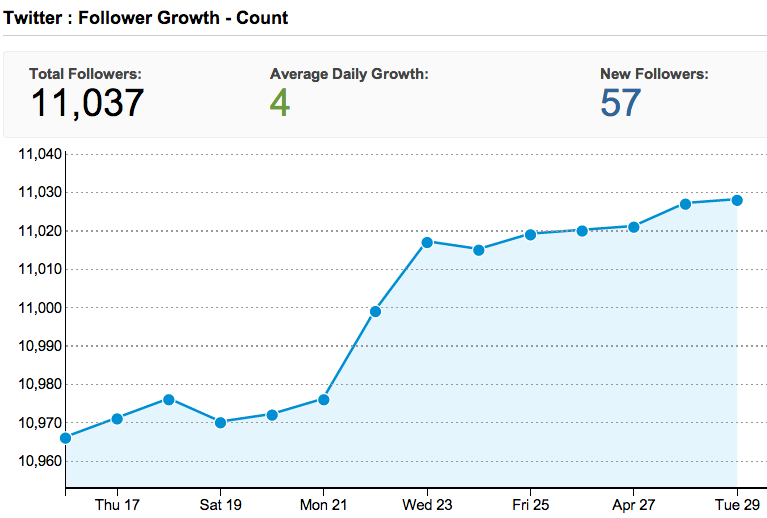 ReTweets, Mentions and Favorites have all gone up.

And most importantly, the strategy has successfully improved my daily traffic via Twitter by 20%. Not to mention the fact that I no longer have to devote so much time to Buffer, and many of my older articles are now getting exposure that had previously been lacking (with so many articles in the archive, I could never take the time to get them all into Buffer, so many hadn’t been reshared since they were originally published).

So as it turns out, increasing my Twitter activity by 66% was a complete success.

All of that aside, I do think that it’s possible to tweet too much. But that has little to do with the frequency of your tweets, and everything to do with the content of those tweets.

This is why I encourage my clients, as well as myself, to develop a consistent strategy for your Twitter activity and only gradually increase volume. No one following you decided to do so because you only had 4 tweets in the last 24 hours, and they’re NOT going to stop following you because you tweeted XX times.

No, what makes someone unfollow you is when you tweet XX times about uninteresting things!

I’ve spent years writing about social media and blogging and have attracted thousands of followers on Twitter who are interested in those topics. When I increase my tweet frequency, I’m just giving them more of what they’ve already expressed an interest in.

If you want to tweet more often, but cannot maintain the consistent level of quality and value in your content, than you’re not yet ready to step up that frequency. Continue to build up your own archive of content or sources of curated articles or whatever it is that you want to tweet about, and then gradually add additional tweets per day.

Like every other social network, if you focus on providing great value in your content – if you’re always striving to educate, entertain and engage – you can’t go wrong. The difference is, with Twitter, you can educate and entertain as often as you want to.