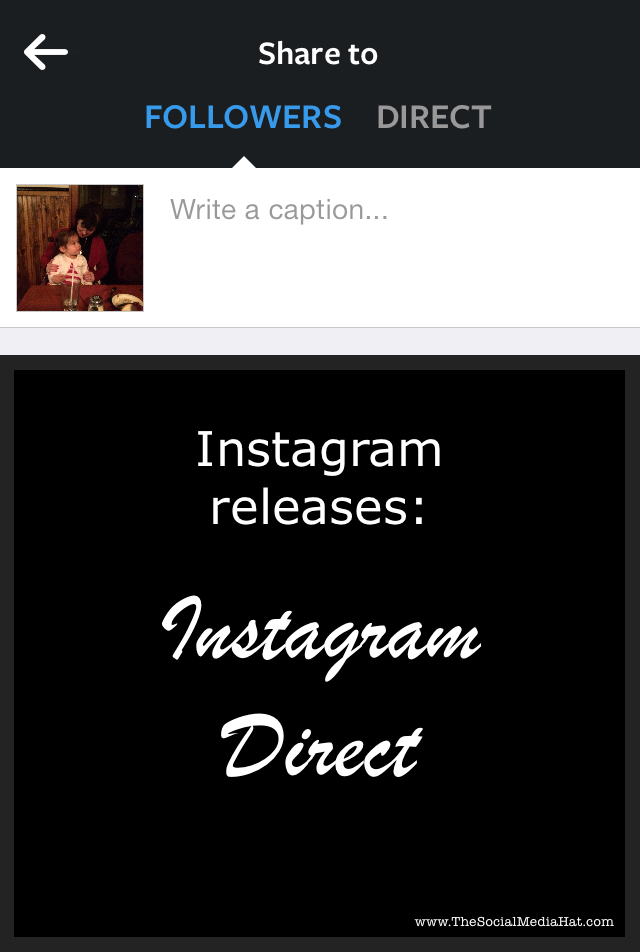 It seems everyone wants a piece of the SnapChat phenomena.

Google recently attempted to outbid Facebook acquire the social startup and was rebuffed, depite offering a King’s ransom for the business, and Twitter has incorporated a similar feature into Direct Messages. And now instead, social giant Facebook has just built their own version. But instead of buying SnapChat or building a new app, they’ve simply added the capability to Instagram. It’s called Instagram Direct, and is availbale via app udpate today.

If you haven’t used SnapChat, or if your kids haven’t shown you, the idea is simple. The app offers an ability to send messages direct to your friends that have an expiration attached to them. Quick notes or images are snapped off and are automatically deleted shirtly thereafter.

With Instagram Direct, users can choose to share images or videos with friends and followers, or choose to send them directly to someone specific.

When creating a new image or video post, just switch from FOLLOWERS to DIRECT above the caption field for the post. When DIRECT is selected, you can choose from or search for one of your followers to send it to.

And now, in the upper right corner of Instagram, you’ll see a mailbox icon that will contain all of your sent or received chats. Unlike SnapChat, they won’t expire though. They’ll remain there and like traditional chat conversations, you can reply to your friends and contacts. You can leave a simple text comment, or reply with a new image or video.

Instagram is just following the trend and demand for more and more cability and flexibility when it comes to images. With the proliferation of smartphones has come a dramatic increase in picture taking and sharing. But not everyone wants to share every picture to everyone. And since most cell phone plans charge extra for text messages that have images or video attached, being able to upload and share an image and dramatically restrict who can see it is a big deal.

If you use Facebook Lists or Google+ Circles, you can share an image to those platforms and restrict who is capable of seeing it, but that doesn’t ensure they will see it. If you really want to make sure someone sees your image or video, sending it to them directly is the only way. Thanks to yesterday’s Twitter update, you can send someone a direct message that includes an image, and of course you can now use Instagram to send images or 15 second videos. At the same time, Apple and Google have been working to make it easier to send rich media directly to other people using your phone via iOS or Android. But it’s still not easy and more importantly, the process isn’t universal. Most of the current methods have requirements and limitations, but greater proliferation of apps and capabilities will begin to overcome that.

Will you use Instagram Direct? Or are you waiting for the capability to come to different app or platform?