This is a global issue that everyone needs to be aware of, and by raising awareness, we can work to eradicate it forever.

You are here: Home / Social Media Articles / I Can’t Believe This Problem Still Exists In Social Media and Beyond
Reading Time: 6 minutes 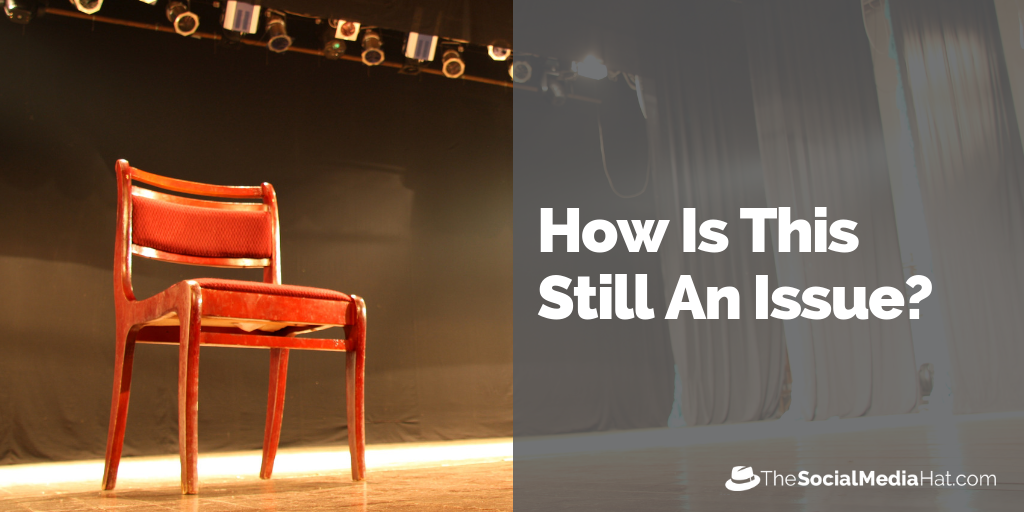 I heard an interesting and timely message recently. I realize that you may not be religious, so please forgive the Biblical interlude, but this ancient Hebrew story – and the lesson drawn from it – was telling.

In II Kings, Chapter 6, we find the story of Elisha, a prophet of Israel, who had been providing the armies of Israel with information about the King of Syria, allowing them to thwart his attacks. When the King learned of Elisha’s activities, he sent a massive force of men and horses and chariots to the city where Elisha was, Dothan. As the attackers surrounded the city, an attendant awoke and panicked. He rushed to Elisha and exclaimed that they were doomed. Elisha prayed to God that the attendant’s eyes would be opened and, remarkably, as the attendant gazed once more around the city, he found that it was encircled by horses and chariots of fire – the armies of God sent to defend his prophet and people.

The point which was being made was that the attendant was spiritually blind – unable to see things of a spiritual nature, but perfectly capable of seeing worldly things and issues, like the invading army. But once his eyes had been opened to what God was doing, he could see much more than before. That sparked a much larger conversation and discussion…

What are YOUR blind spots?

Think about that for a moment. It’s a tough question isn’t it? As I mentioned to my wife, aren’t I technically blind to my blind spots?

While funny and ironic, it’s actually not true. You may not be able to see where you have a blind spot, but you certainly can be aware of that blind spot. And once you know it’s there, you can account for it and compensate for it. Not unlike the spaces around our vehicles that can’t be seen using our mirrors. We can add the little disk mirrors, or physically turn our heads to expand our field of vision, thus compensating for spots where we might be blind to the existence of other vehicles.

We all have problems and shortcomings and faults. The world is a deeply broken place, filled with issues and challenges. And there are undoubtedly issues about which we’re completely unfamiliar. A neighbor battling cancer. A family in another country struggling to survive an oppressive economy. A business that has accrued too much debt and is in danger of having to file bankruptcy.

We’re surrounded by problems both big and small and due to our own lives and issues and challenges, due to our own state of blindness, we cannot see those problems.

So what’s the problem that I can’t believe still exists in social media and beyond? The inequality that women suffer every single day around the world for no other reason than that they’re women.

While we know this is a global issue, spanning everything from voting rights to healthcare to sexual harassment, what’s opened my eyes and brought it home to me were recent posts and activities from friends and colleagues in the industry. A beautiful illustration of this bullshit problem.

You see, I’m a social media blogger. For years I’ve written about the networks and tools and industry overall. I’ve attended conferences and built relationships, and most recently, have joined Agorapulse as Brand Evangelist. Many of my friends speak at prestigious events around the world and I’m perfectly aware of that fact. What’s less obvious until pointed out is that there are far fewer women speaking at these events than men. And that the number of women taking center stage, delivering coveted keynote addresses, are even fewer.

And if that wasn’t frustratingly maddening enough, women today are STILL being paid less than men to deliver the same presentations and content and event prestige.

How is this still a thing in this day and age?

I have been attending conferences in the social media industry since 2015. Conferences in the tech industry for even longer than that. I’ve heard some of the best, most powerful and impactful speakers in the country. While I can honestly say that I have never considered the gender of a speaker as a defining trait – I’ve only ever cared what and how they present their topic, I can also unequivocally state that the absolute best speaker I’ve ever heard is a woman.

Why should she be paid any less than a man? Why should she receive fewer opportunities than others who have less or the same experience?

The lack of women who are being paid to speak, or paid enough to speak, is an issue my friend Kathy Klotz-Guest has rightly championed. She’s not alone in recognizing how ridiculous it is that we’re even discussing this, and she’s working to raise awareness. She recently pushed the issue in a series of tweets with another speaker, Jay Acunzo, and they’re both working to seek out and promote women and people of color who are speaking, doing live video broadcasts, or publishing podcasts. These women are putting themselves out there and kicking ass and they deserve the same recognition and appreciation and compensation as any man.

This is another area where I have a huge blind spot. I don’t listen to podcasts and rarely watch live video shows. I much prefer to read (or write, obviously), so the few shows I’m familiar with are those put out by my closest friends and colleagues. (Lots of amazing women, btw!!)

But now that I know this is a problem, how can I ignore it? How can I just assume that someone else will fix this? I can’t. And I won’t.

Meanwhile, some of my best friends and colleagues gathered recently at a rental home in Arizona. They weren’t planning a business project, or hosting a management retreat – they were gathering for the sole purpose of creating a tribe. A tribe of badass women who are supporting each other and raising awareness of these and other issues.

Again, this is an area that myself and others wouldn’t necessarily see – most of us are quite blind to how much speakers get paid, what the breakdown of speakers is across all conferences, or how speakers are treated at any particular conference unless we’re speaking there ourselves.

So these 7 ladies… queens… got together for a whole weekend of talking and sharing and bonding and educating. They broadcast a Facebook Live across all their channels for the purpose of digging into these issues, bringing them to light, and opening our eyes.

They’re speaking up and speaking out and we all need to listen.

They’re also helping to create change and make a difference by offering solutions. Beyond the obvious (treat women equally, dammit), Mia Voss, Bella Vasta, Jenn Herman, Jessika Phillips, Jennifer Watson, Kelly Noble Mirabella and Amanda Robinson shared one vital piece of advice that I couldn’t agree with more. You need to have a tribe of people around you who can support you and be there for you when you need different kinds of advice. Friends. Colleagues. Mentors.

I usually teach this within the framework of a Mastermind Group. Not the kind of group where one person is mentoring the others, but one where everyone within the group is relatively equal and constantly working to help each other. For remote, solopreneurs in my space, this is an absolutely critical component to success. I adore my wife and family, but it’s incredibly helpful to have peers to whom I can turn for professional advice, brainstorming sessions, and opportunities to help them in turn.

Those opportunities can often turn into collaborative efforts, like the exclusive, paid membership group that Jenn Herman, Amanda Robinson, Stephanie Liu and I formed together. I’m incredibly fortunate to be working with these amazing, powerful women to offer the 360 Marketing Squad – a private community where members are able to ask us questions and attend regular live video training sessions.

If you aren’t already part of a tribe or group or Mastermind, do that for yourself.

Not all men are responsible for these issues, and it’s not even always men who are contributing to the problems. But everyone who hears this message has now had their eyes opened. They may choose to ignore it, but they cannot deny that they know about it.

Promote the women in your space. Work to help them achieve the equality and consideration they deserve. Tag them in a comment below! And keep sharing your stories.

But more important than that, raise awareness. The more people that know this is still an issue, the more people who will be in a position to make an actual difference. I do not run any conferences and cannot force an event to pay women more than they are. But I CAN shout from the rooftops that unequal pay is wrong. And when more women speak out and speak up with their stories, change will happen. Just because it’s always been that way – just because these industries never intended for there to be equality – doesn’t mean it cannot and will not happen.

As the poet Audre Lourde finished:

So it is better to speak
remembering
we were never meant to survive.

Multiple ways your business can leverage a virtual event to build community.