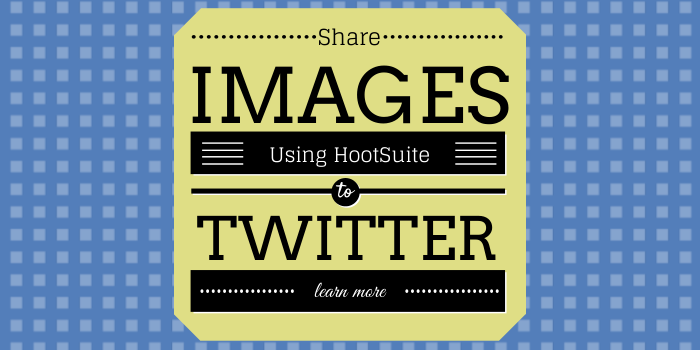 Previously, HootSuite Pro and HootSuite Enterprise users were able to share images, but the images were uploaded and saved via ow.ly links and only shown on Twitter as part of the expanded tweet. As HootSuite notes, images in Tweets have been shown to increase engagement rates by three to four times over messages without photos, so anything we can do to increase the visual nature of our tweets will help increase engagement.

As you can see, the image that was uploaded with this tweet is only displayed if you click on the View Photo link.

Instead, HootSuite Pro users can now share images that are displayed right within the timeline, bringing far more attention to their tweets, and look like this: 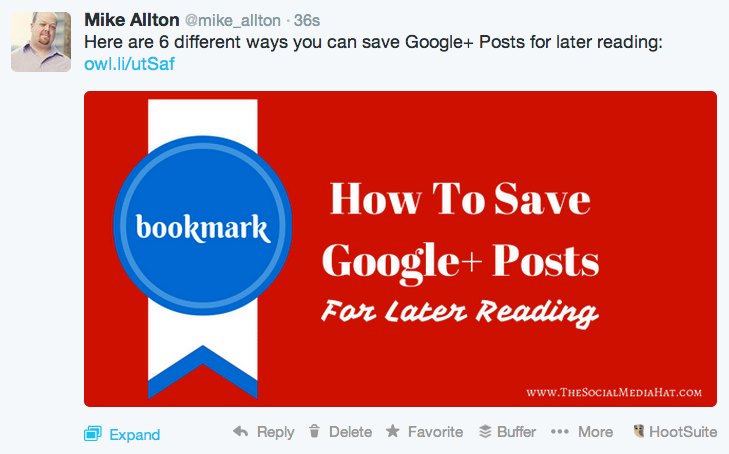 How To Enable Pic.Twitter Within HootSuite

Whether or not you use pic.twitter or ow.ly to share images is entirely up to you. Your HootSuite account and any Twitter social profiles you have set up will use ow.ly by default, so you will need to log in and change to pic.twitter if you want to use the native images for full display.

And that’s it! The setting will be saved automatically and you can begin sharing images to Twitter.

As we’ve covered before, sharing images to Twitter, as well as to Facebook and Google+, is pretty easy. Simply begin composing a new message in the Composition box, and select one or more Twitter accounts. Once you’ve typed your text, simply drag an image from your desktop to the compose field and drop it where HootSuite indicates.

An ow.ly link will be inserted into the status update, but the image itself will be displayed instead, even if you’re using pic.twitter to share the image.

As with any other status update, you can choose multiple social profiles to share, as well as schedule the post to be shared at a specific date and time or AutoSchedule.

If you have enabled Twitter Cards for your website and articles, note that attaching an image to your tweet will replace your Twitter card, so choose wisely. Sometimes it’s better to have the article summary that comes with the Twitter Card, which will include your article image if you’re providing one.

How to promote your new blog posts to drive massive traffic to your site. http://t.co/0FA8n7RQ04

As with most blogging and social media techniques, I recommend testing different options and monitoring which methods resonate best with your audience. I also recommend using different techniques at different times simply to ensure that you aren’t always

An approach that seems to work well for me is to share brand new blog posts with a full image initially, and then share as links with Twitter Card article summaries later on. Since I generally share new blog posts 2 – 4 times on the day they’re published, I have plenty of opportunities to try different approaches.

Photos posted through HootSuite using pic.twitter will be automatically included in your Twitter profile’s photo gallery and will be displayed at the full resolution supported on twitter.com.

Do You Really Need HootSuite Pro?

So all of this is great, but what if you aren’t a HootSuite Pro user?

In the past, I have told businesses and bloggers that the biggest difference between the Free and Pro HootSuite accounts is the limitation of 5 social profiles. Pro users have had the option to share images for some time now, but since they weren’t being displayed in the stream, the images weren’t much more effective than Twitter Cards. That in and of itself, while nice, wasn’t a reason to upgrade.

But being able to use Twitter’s native technology is a big deal. Being able to share full images, even with scheduled posts, could potentially be a game-changer for some businesses and bloggers. If you’re regularly blogging and you’re creating or using rich, stunning images, sharing those images directly to Twitter could make a dramatic difference in your Twitter engagement rates.

Since the cost of HootSuite Pro is just ten dollars a month, it probably makes great financial sense at that point to upgrade.

If you’re interested in giving HootSuite Pro a try, I would love for you to use my affiliate link, and you’ll get to take the Pro Dashboard for a free spin for 30 days. If you have any questions at all about HootSuite, please leave a comment below.

Previous Post: « How to Save Google Plus Posts for Later Reading
Next Post: Google+ Game Changing Update: Full Image Teasers »