Three reasons why allowing yourself to get sucked into debates on Facebook is likely a waste of time.

You are here: Home / Social Media Articles / How To Debate Issues On Facebook

Glutton for punishment, aren’t you?

You see, the first lesson you need to take from this article is that conversations via comments on a Facebook post are not the same as face-to-face conversations in a bar.

People also tend to feel braver, more willing to be combative than normal.

Ok, maybe it is a little like talking in a bar.

My point though is, generally speaking, participants in discussions around Facebook posts, particularly when the frame of reference is a polarizing issue, aren’t there to play fair.

They don’t have to acknowledge what you’ve said, or anything anyone else has posted, if they choose not to.

Which means it’s quite easy for such conversations to seem unreasonable. You might write what you thought to be an excellent and perfectly reasoned point, only to see it complete ignored and disregarded. 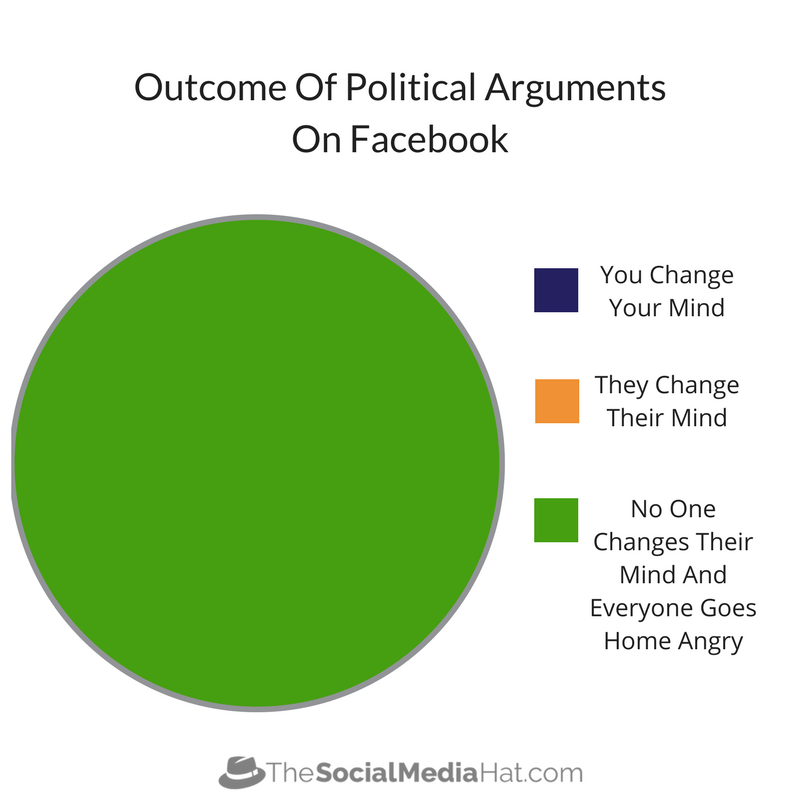 Those who guard their mouths and their tongues keep themselves from calamity. Proverbs 21:23

The second lesson is that you must consider why someone’s commenting and responding to your post in the first place.

Are they generally interested and curious, or are they spoiling for a fight?

That’s something you can spot from the tone of their writing. Are they respectful and questioning, or are they aggressive and self-righteous?

Bear in mind that most people using Facebook aren’t there to debate anything at all. They’re using the platform to catch up with what their friends are up to – to watch a couple videos and scroll through some images. Most people will see a topic for debate and keep scrolling.

Don’t believe me? Try it for yourself. First, share a personal picture of some kind, preferably a pet or a child, and then follow that up an hour or two later with a post about a controversial topic, and see which post gets the most engagement.

Here’s an example from my own Facebook profile, two posts, just a few days apart, that got dramatically different engagement: 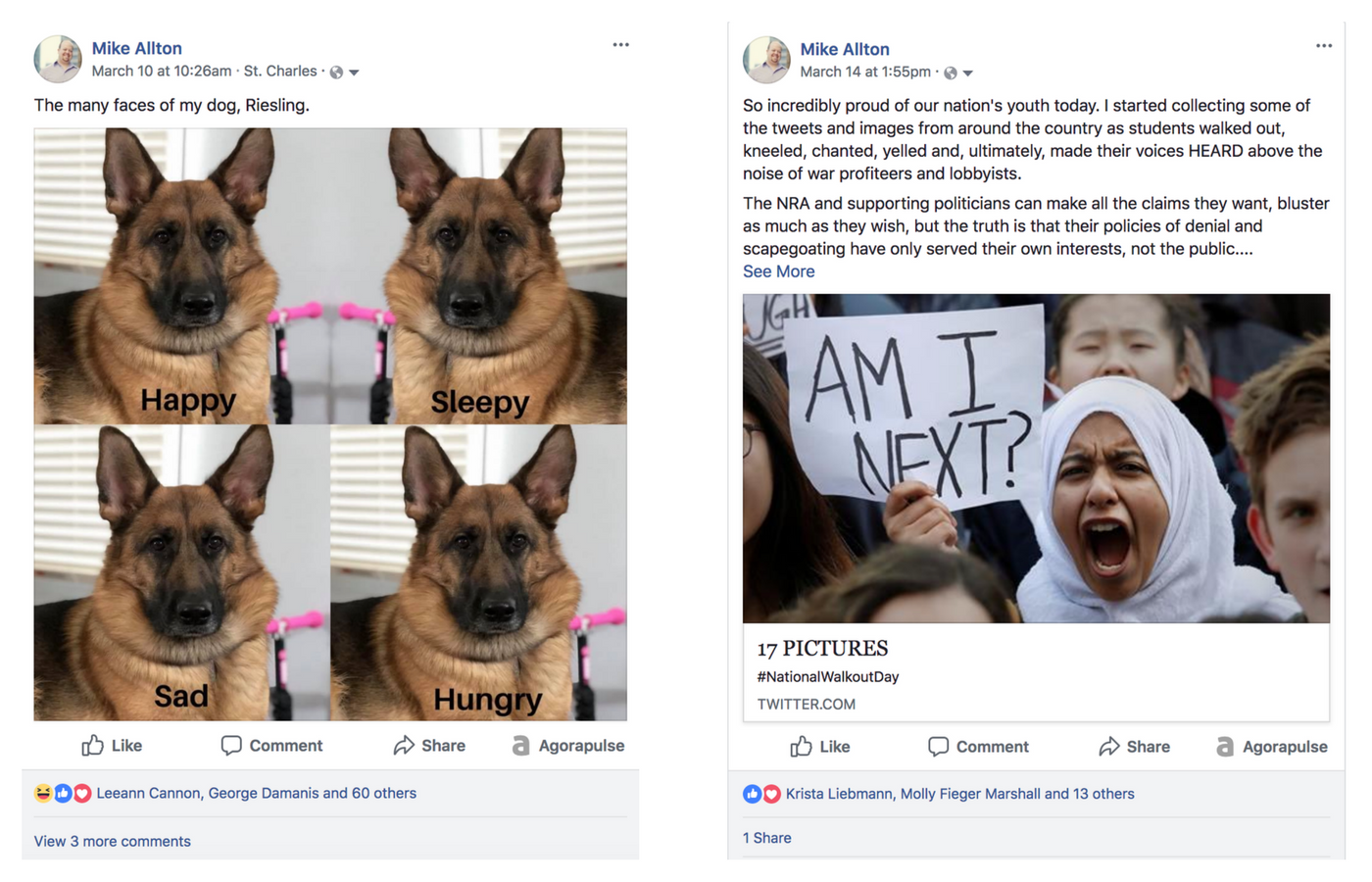 The funny picture of my dog racked up 62 reactions and 9 comments, while my post about #NationalWalkoutDay generated just 15 reactions, 4 comments and a share. That’s 355% less engagement!

Which means that if someone does decide to engage with your “controversial” post, particularly if they decide to leave a comment, it’s going to reflect a far higher degree of interest on their part.

People will only comment on controversial social media posts if they care deeply about the topic, one way or the other.

Armed with that information, one needs to think carefully about why someone decided to not only comment on your post, but take an alternate position. Not only do they care deeply about the topic, but they think you’re wrong, and they’ve set out to prove that you’re wrong.

It’s hard to have a successful debate under those conditions.

Which leads us to our third and final lesson: it’s hard to prove an opinion!

Did you know that Star Wars: The Last Jedi, which was released to theaters on Dec. 15, 2017, has grossed $619,667,617 in the U.S. alone as of March 16th? That makes Episode VIII the 6th highest grossing domestic film of all-time. It’s also one of the best films in the Star Wars franchise, successfully weaving together traditional Star Wars narratives with new directions and motifs.

2/3 of that paragraph is factual and not up for debate. But that last sentence is one that many might disagree with. It’s my own opinion that The Last Jedi was a great film, and you don’t have to agree with me.

Now, it might be possible for me to persuade you – to talk to you about how it made sense for the character of Luke Skywalker, who did not grow up in the Jedi Academy, to fail in his own attempt to train other Jedis. That anyone whose failure was so dramatic would feel a similar urge to remove themselves from everyone else. (When was the last time you allowed your sister’s son to succumb to the influences of an evil cult and become an angry, murderous villain?)

But at the end of the day, it’s still just an opinion. I cannot prove it, I can only explain why I think that way and give you reason to consider changing or adopting the same opinion for yourself.

If you haven’t yet seen The Last Jedi, you might hear my opinion, think it’s reasonable, and consider it as true. But that would mean you don’t care deeply about the topic (and obviously aren’t a true Star Wars fan!!).

Remember, most of the people who take the time to comment on our controversial posts do so because they care deeply. They have already formed an opinion and are not there to be dissuaded. They want to persuade you that they are correct and you’re wrong.

You know why we still have gun control debates and other controversial discussions? Because the issues haven’t been solved. And until they’re solved, no one really knows what the best solution is. They’re all just opinions. Until someone’s idea begins to gain traction and has demonstrable success, debate will continue.

The 1950’s and 60’s saw incredible developments in automobile manufacture. The post-WWII era was defined, not only by the design of the cars, but by the proliferation of ownership. The United States came out of the war with a economy that was booming, right along with the population. 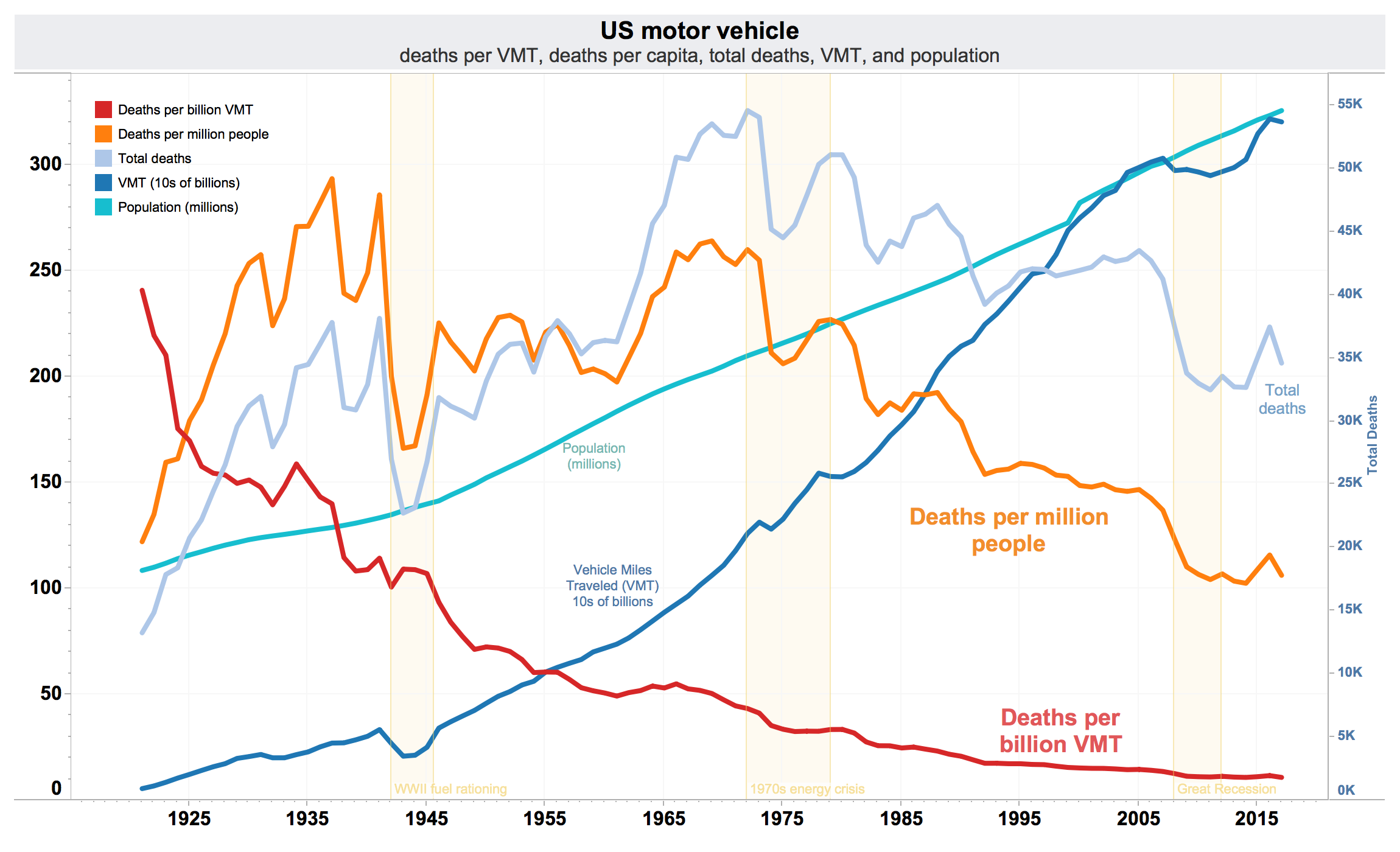 In this chart, the orange line represents the fatality rate. As you can see, it was trending up until World War II started and fuel rationing was put in place. After the war, the fatality rate began to increase again until two major events happened.

In 1970, U.S. oil production peaked, which led to several years of problems while oil supplies and imports were sorted out. This ‘energy crisis’ created skyrocketing gas prices and frequent outages, leading to far less drivers on the road (and fatal accidents).

At about the same time, the great Seat Belt Debate started.

If you’re under 45, you might not realize that there was a time when seat belts were not mandatory. Americans in particularly were vehemently against the idea of having to be restrained, and definitely didn’t want to be told by the government that they had to.

Until some communities went ahead and enacted legislation that enforced seat belt usage, and followed that with measurable decreases in fatalities, did the rest of the nation follow suit.

Today, there’s no longer a debate about the safety of seat belts. Everyone knows that your odds of surviving a car crash go up immensely if you’re buckled in. We now have decades of data that back that up, and you can see in that chart how the orange line has been trending down since 1980.

But prior to the enactment of those laws, whether a seat belt would save your life was just an opinion. Had Facebook been around back then, the posts would have looked very similar to those today revolving around other topics.

Sharing Of Facts, Not Opinions

The trick then is not to get caught up in debates at all (unless of course that’s what you’re hoping to spark). But that’s not to suggest you cannot or should not share posts about controversial topics.

You absolutely should have things that you’re impassioned about and are willing to take a stand on, and your friends should know what it is that you care deeply about.

And your stand, whatever it is, will essentially be your opinion about how things should be. But my advice is to make your posts about action, not opinions. Share with your friends and audience what you’re doing, or information about your chosen topic.

If they have questions and want to learn more, great! Most will keep scrolling, but some will appreciate what you’ve shared and may even take the time to dig in a little deeper.

You may or may not agree, and you’re welcome to your opinion. While I’ll be talking about the topic on social media, what I won’t be doing is inviting others to debate with me. As our first chart so accurately demonstrated, no one is going to win those arguments!

Now, up until now the perspective has been from your own posts. But what about other people’s? What should you do when your friend posts some outrageous claim that you feel obligated to dispute?

Still here? Go back to the top and read this entire article again. ; ) 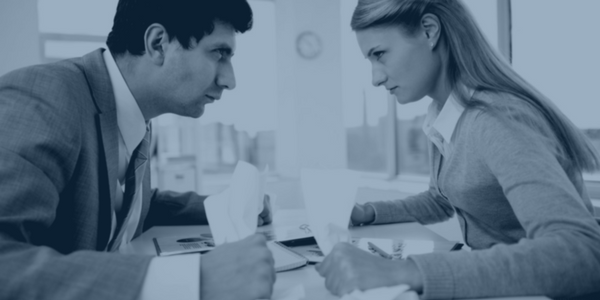