How To Ban Trolls And Bots From Your Facebook Page

Automated spammers can sap your time and energy, keeping you from more productive Facebook activity. Ban them!

You are here: Home / Social Media Articles / How To Ban Trolls And Bots From Your Facebook Page
Reading Time: 4 minutes 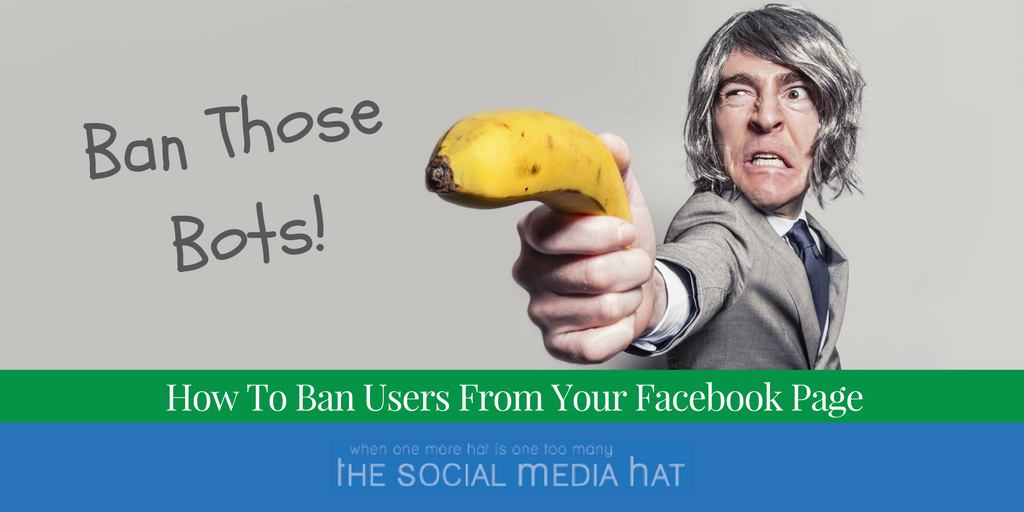 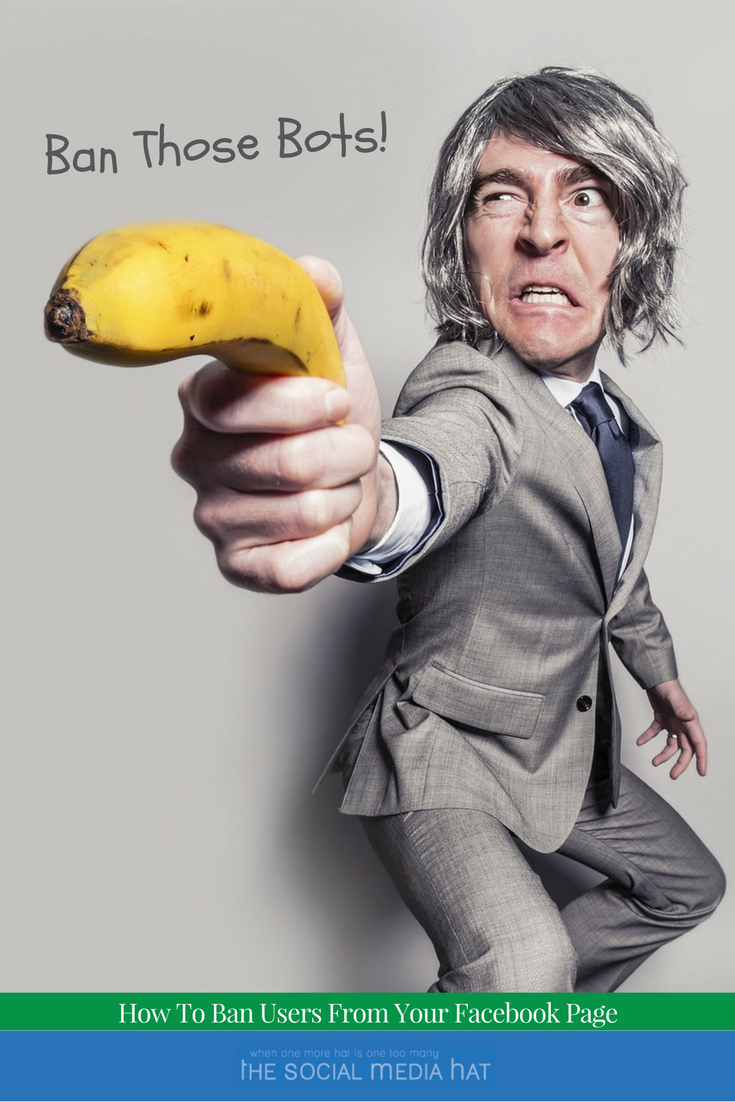 Have you had problems with people leaving vulgar comments and images on your Facebook Page?

Have you noticed that every time you create a new post to your Facebook Page, it gets immediately bombarded with Likes and inane comments?

Here are some from my “fans”:

These were on a quote graphic I posted that simply said, “Your attitude, not your aptitude, will determine your altitude.” ~ Zig Ziglar – clearly they had nothing to do with the post, and everything to do with drawing attention to the Facebook Page doing the commenting.

Unless you enjoy wasting time and energy getting and dealing with all of these spammy comments, you’ve probably wanted to stop them. The problem is, if you’re looking at the comment itself (intuitively), there’s no way! There’s no menu option to ban someone from their comment. If you go to the Page itself, all you can do is block it from engaging with your personal profile.

But, fortunately for you, I have found a way!

In case you’re wondering, there’s actually a big business brewing as a subculture of most social networks. It takes engagement automation to new levels in order to generate the illusion of social activity. While it can make your own profile look more active than it really is, the primary purpose is to draw attention to your profile and attract fans.

The idea is simple.

And normally, that works! It’s a great way to become engaged with your targeted fans, peers and colleagues, and industry influencers.

The problem is, it takes time!

You could literally spend all day Liking and Commenting on other Facebook Page posts. And realistically, your return in terms of new fans is probably about 1%.

So… enter automation. Scripts take a look at other Facebook Pages that fit certain criteria and spam them with activity.

Look, I’m not anti-automation. I’ve even sampled scripts like this on other networks. But it’s usually along the lines of a one-time engagement, not spamming an account with comments every single time they post.

But that’s the motive. The people who write and utilize these scripts are hoping to get your attention and your Page Like so that they can more directly market to you.

What About Trolls And Abusive Fans?

Normal people who are simply making comments that you don’t like are a different matter, of course. Whether or not you ban them requires a deeper thought process. Generally, I don’t recommend banning real folks from your social profiles as it can often backfire. They’ll know they’ve been banned and, if they’re already peeved at you about something, they might make an even bigger stink about it somewhere else.

More importantly, banning means that there’s no further possibility of real engagement and interaction from that person. Sometimes that just may not be a possibility, but not always.

You might consider taking Guy Kawasaki’s advice. In this post on Peg Fitzpatrick’s blog, he reveals his “social media power tip” of only hiding comments, never deleting, so that people who leave offensive comments don’t know they’ve been deleted, and their friends can still see the post activity (and the post itself!).

Whether or not you ban a user is up to you. The purpose of the rest of this post is to show you how, in the event you need to, but is mostly about getting rid of bot activity.

Now that you’ve come to understand how crazy and meaningless that bot activity is, let’s get rid of it! 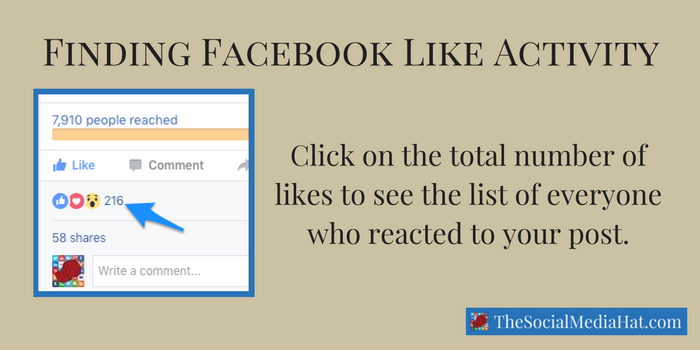 A popup window will come up that is actually intended to give you an opportunity to invite new fans to Like your Page if they’ve already Liked one of your posts (make a mental note to do that the next time one of your posts gets a lot of action, or racks up tons of paid Likes).

As you go down the list, you’ll see the Page activity from the bots that are annoying you, and Facebook will give you the option to Like their Page as your Page, as though you’d really want to do that. But to the right, you’ll see a gear icon.

Another box will come up asking you to confirm that you want to ban that page. Click Confirm and then you’re all set.

That Page bot will never be able to automatically spam your Page and posts again.

This also works with individuals who are being threatening or vulgar.

Note that this only works for bots that have reacted to the post. If they only left a comment, they will not show up in this list and you’ll need to wait until they react to a different post to ban them.

How To View Banned Pages

If you want to review who you’ve banned, or perhaps you’ve decided to relent and allow one of those crass peeps back into your page, it’s easy.

Go to your Page Settings, then click on People and Other Pages. Change the selector to Banned People and Pages.

Select the checkbox to the left of one or more pages and then click the gear icon. Click on Unban From Page and you’re all set. 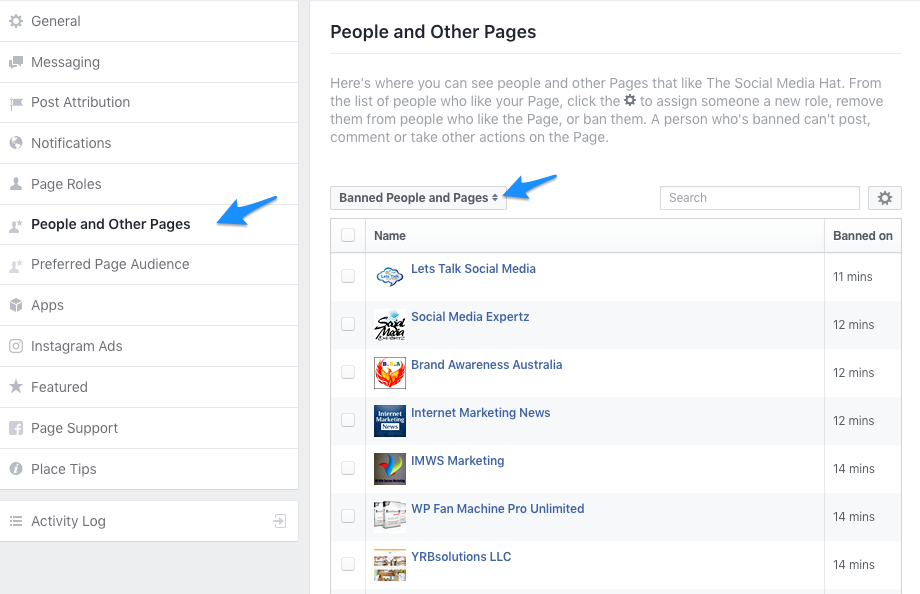 If you’ve banned quite a few Facebook Page bots, you can use the Search bar to find a specific Page or Profile to unban.

Bots and Trolls may be fun for a while, as they drive up your engagement on your posts. But it’s all an illusion, not to mention a time-suck and distraction. When you notice that kind of activity, just take a moment to ban the account and move on!

This technique is only available on Desktop, as of now. If you have any questions on identifying bots or dealing with them, leave me a comment below!