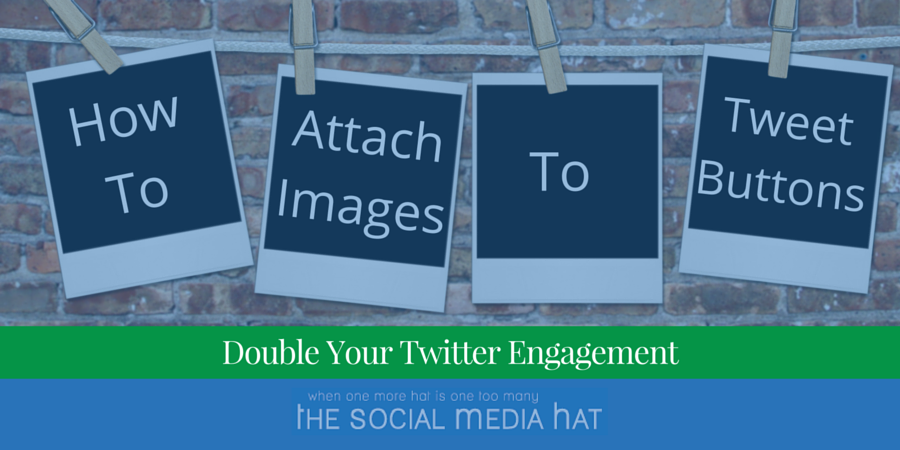 Tweets with image links get 2x the engagement rate of those without. [tweet this stat!]

Most of the time, if you’re tweeting out a link to one of your blog posts, you’ll want to attach an image to help it stand out in the rapid Twitter stream. But how do you make sure that other people who are tweeting out your article have the right image attached?

Twitter Cards are nice, but they only display the article image and information when someone clicks the tweet.

No, an attached image is far better.

I’m going to show you how to set up the attached image, and how to use it in the most common situations.

While you cannot attach images to tweet buttons or click to tweet links, what you can do is include a link to an image that has already been tweeted out.

You see, when you attach an image to a normal tweet, the image is uploaded to Twitter and becomes a hyperlink to that specific image, like this:

Anytime someone sends a tweet that includes a pic link like that, Twitter will automatically grab and attach the linked image and display it as a full image instead of a link.

So that means you can specify an image in any tweet you want… the trick is getting the image link first.

As you might have guessed, you have to issue a tweet and attach the image before you’ll be able to get that link. Create a tweet as you normally would, either using your sharing buttons or tweeting on twitter.com natively, and drag an image from your desktop into the tweet to attach and send it.

Note: If you’re preparing for an article that you haven’t yet published, you can either:

Note: Do not right-mouse click the image. The image you see in the tweet uses a link like pbs.twimg.com which will not work. We need that pic.twitter.com link.

Using your browser menu, we need to “View Source” to see the HTML code behind the display of the tweet.

Select the appropriate option, and a page filled with HTML code will open in a new tab.

Don’t bother trying to read through it… there’s over 5000 lines of code there. Instead, all we need to do now is do a Find (in your browser menu) and type in a word from your tweet. Like this:

There’ll likely be at least 6 – 7 occurrences of the word, as Twitter uses the text of the tweet to populate Title, Description and other tags and fields. Click through them all until you get to the occurrence that is part of a paragraph tag ( ), likely around line 4000.

At the end of that snippet of code, you’ll see the pic.twitter.com link for the URL. Highlight and copy the entire URL, like this:

Now you’ve got your image link!

Here’s what you can do with it:

First, I found a quote that I thought would be great for this particular article, “The secret of getting ahead is getting started” by one of my favorite authors, Mark Twain.

I pulled up the article, edited it, and added the quote in where I wanted it to go. I formatted it and added some text at the for the tweet link, like this:

“The secret of getting ahead is getting started.” – Mark Twain

Next, we get to use our old friend ClickToTweet.com. The free service will create for us a single URL that, when clicked, will open a tweet dialogue allowing the individual to review the tweet and then share it with their audience.

You’ll need to enter the text that you want tweeted, along with a shortened link to the article, like this:

Now, in order to attach an image, you’ll need to paste in the pic.twitter.com image link that you found above. Paste it in after the link to your article.

Take a moment to review your text, add hashtags, or any other changes you’d like, and then click Generate New Link.

That will give you a shortened link that you can then apply to your text or an image as needed. In my case, I hyperlinked the ‘tweet this’ text after the Mark Twain quote. When clicked, the tweet sent will look like this, automatically:

"The secret of getting ahead is getting started." – Mark Twain https://t.co/fKkarqgaBs pic.twitter.com/pYFGV6LWpT #quote

Another option to encourage tweets of your content is to embed a custom Tweet button. You can use Twitter’s button generator to select the size and shape of the button. And if you do, you’ll be able to take advantage of Twitter’s tweet counts.

You can leave Share URL to the default page, unless you need to specify a different URL than where you’re putting the button.

For the Tweet text, use the page title or whatever text you want, but you have to specify the text and then Insert the image link you copied above.

Adjust the other options as you see fit, and then copy the HTML snippet to the right of the fields. Once you embed that code into your page or post, the button will render like this:

JustRetweet – I love setting up reciprocal tweet shares on JustRetweet, and this technique works just as well there. Just create your Tweet as you normally would and include the pic.twitter.com image link at the end.

Twitter Sharing Buttons – Some social sharing systems, like Social Warfare, allow you to specify the text that you want tweeted out by default when someone clicks a normal tweet button. While editing your post, you can edit that field to include the pic.twitter.com image URL so that your preferred image will be attached to all outgoing tweets.

Triberr – If you’ve connected your blog to Triberr, each time you publish a new blog post, it will be imported into Triberr and made available for your tribemates to share. If you click on Stream, change the filter to My Posts, and click on Edit Post, you can paste your pic.twitter.com image link after the title of your blog post. All subsequent shares will have the image attached automatically!

Have another great use of pre-programmed Twitter images? Let me know in the comments!

As a reminder, in a study done by TrackMaven, it was found that including a great image along with tweets resulted in: 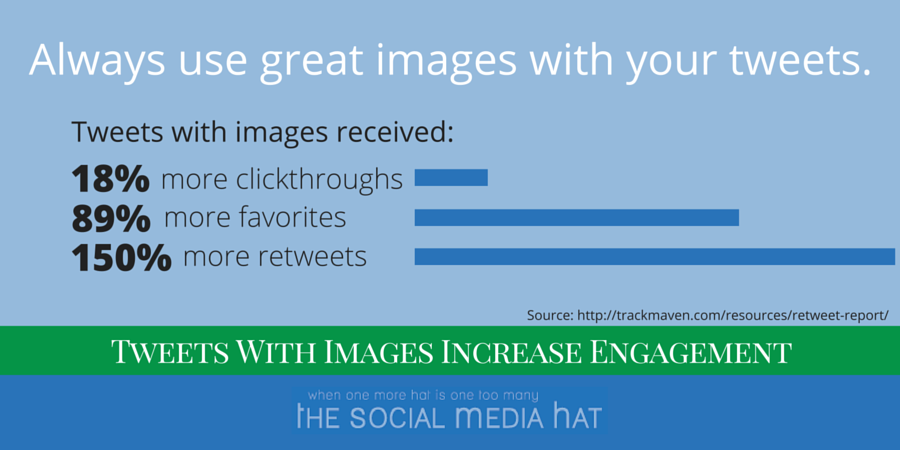 Give it a try on your next blog post. Include a nice quote or statistic and make sure that your click to tweet has a great image attached to it!

Next, learn how to growth hack your Twitter account and start bringing in hundreds of new, targeted followers a day!

Previous Post: « How To Save Time and Get Paid Faster
Next Post: The Book On How To Promote Your Blog Is Available Now! »