What began as a promising idea – a social network that was ad-free, clean, and devoted to giving users control over their experiences – Google+ has now officially been terminated.

In an announcement on the Google blog, the “consumer Google+” has been scheduled for termination within 10 months (h/t Jeff Sieh), by August 31, 2019. Citing ongoing security issues and maintenance challenges, while repeatedly pointing out the extreme lack of mainstream acceptance and consumer usage, Google stated that the consumer version of Google+ will be shut down. Meanwhile, enterprise usage of the platform has grown sufficiently to warrant continuining, with new features being promised.

UPDATE: Due to additional security issues (and an obvious lack of interest in dealing with them), Google now plans to shut down Google+ in April 2019, with all API access revoked by March 2019.

Over the years, many Google+ users have taken advantage of the platform’s robust image editing and categorization features & storage, as well as video, so mechanisms and instructions will be provided for them to download their assets. For those folks, like David Amerland, who have used Google+ for years to create and publish long-form content, this is a terrible development. They’re now faced with the prospect of migrating that old content to a new platform, or giving up on it entirely. Considering how easily and effectively some Google+ posts were able to rank in Google searches, this is no small concern.

What Happened To Google+?

The stories about the death of Google+ have literally been circulating for years. “Farewell, Google+, We Hardly Knew Ye” —The Daily Beast, and “Google Further Distancing Itself From Google+” —PCMag, to name just a couple. And for years, those stories were far from the truth.

In the early days of Google+, it was a rapidly growing network, with widespread adoption and well-known influencers like Guy Kawasaki and Mike Elgan singing praises. The network showed tremendous promise for being able to connect like-minded individuals from all over the world, and create a platform where meaningful, uncluttered conversations and discussions could take place.

Technology-wise, Google+ was poised at the forefront of all networks with the addition of Hangouts and Hangouts On Air – the ability to broadcast live video with up to 10 participants to a captive audience, simulcast and saved to sister-network and video powerhouse, YouTube. (Years later, most other networks still only support broadcasting 2 people at a time, and even then only from mobile, unless you’re using a third-party app.)

Yet the lack of monetization, and the challenges of maintaining such a platform, proved to be too heavy a burden. When a commercial slant failed to materialize, Google’s head of Google+, Vic Gundotra, stepped down, and the platform was changed dramatically. It was scaled back, features were removed or migrated, and the user base declined dramatically.

What was once a thriving platform for networking, Google+ became the ghost town that it had so long been accused of being.

“This was bound to happen. Despite the many of us (and yes, there were MANY more than people thought) who understood the value of Google+, it was a product that most didn’t understand. It had incredible value from the perspective of “social media meets SEO” and many savvy marketers took full advantage of the benefits. Heck, my agency worked with over 450 businesses over the years to make undeniable improvements to search engine results just by utilizing the platform in a semantically (and socially) relevant way.

“Google+ was too complex, lacked focus, suffered from under-developed features, and never allowed the level of developer access to get significant buy-in.

“As someone who can say I’ve built many lasting friendships, business partnerships, and memories on this platform, even I have stopped using it over the last couple of years. Nevertheless, I will be sad to see it go. And I hope that Google doesn’t give up on social–they had something truly special for a little while, and if they learn from this, they will do better next time.” – Dustin Stout

What’s worse, while conducting a massive internal audit, Google’s team also found a huge security fault that potentially exposed significant amounts of users and user data – but conveniently deleted all records within two weeks of the finding in March of 2018. They’ve admitted that over 500,000 profiles were potentially compromised. Since this event was included in Google’s announcement as a reason for the closure, it seems evident that Google does not wish to deal with the backlash and controversy that befell Facebook around the same time, and would rather just shut the whole thing down.

“I’m the first to admit that I went from zero to sixty with Google+. I pushed back, didn’t see the value, dove in, and from there it was growth at a lightning pace. It became a major player in my social media and SEO strategy.

“That’s because of it’s unique abilities. Google+ wasn’t only a social network, it was a key component within the Google ecosystem. And as a blogger, the platform was this relationship marketers dream. In fact, the relationships I established so many years ago are still thriving today.

“The Google+ we all knew and loved has been (and will be) missed.” – Rebekah Radice

What’s Next For Google+ Users?

Frankly, most Google+ users stopped using the platform long ago. Personally, when it became evident that the community of a quarter million people I had created there were no longer tuning in, I refocused my time and effort into Facebook and Twitter. We’ve known for years that that monthly usage data for Google+ was dated and inaccurate. And we could easily see the difference in engagement.

For those who are still using Google+ daily, the options are clear and limited. Facebook is the only existing network that functions similarly to Google+ AND has the kind of widespread usage to assure someone of finding people they know and being able to create connections. With Facebook you can connect with friends, join Groups to meet new people, share photos, create video, and have the kind of networking experience you used to have on Google+.

More important than features though is longevity. Facebook has over 2 billion users and is clearly profitable thanks to a robust ad platform. No matter what other networks are formed, or what challenges Facebook faces, the network will not be so easily dismissed.

“Even though I haven’t spent any length of time of Google + recently, I’m still sad to see it go. It’s where I first met folks like Mike Allton and Peg Fitzpatrick who I consider good friends. Google + is where it all started for me.” – Jeff Sieh

Sadly, there was so much perceived competition between Google+ and Facebook that it became a rivalry much like Android vs. Apple, with consumers taking sides and having pitched debates (many of which I participated in!). The result though is that many current and former Google+ users have a stated hatred for Facebook which will never be quenched. While I’d advise burying those feelings, I understand that many won’t. They may choose to turn to Twitter or even LinkedIn, which is already experiencing a renaissance and may receive even more attention and usage now.

“All sociotechnical platforms have a finite lifespan (http://bit.ly/2OPatwA). The only way they can extend it is by evolving with the need of their users and in this case, Google+, sadly and evidently, did not. If anything, for some time now it has been ran on autopilot with some of its most cohesive and compelling features (Google+ photos, Hangouts) ripped out and span as stand-alone products.

“Nevertheless, as an experiment it has been useful and incredibly revealing: People are hardwired to connect. Give them an environment where they can do that free of ads and with sufficient functionality and you will get the most unlikely communities coming together and the most unlikely people forming friendships, sharing information and exchanging ideas. These are all value-driven, values inspired, human activities. With Google+ going away and Facebook still being a privacy-free zone where no individual is ever made to feel they matter, it feels like we are regressing in our connectivity instead of progressing.

“This is not the case however. The web matures as we do. Technology is evolving rapidly and we, as digital natives, are also acquiring new skills. Our world is, once again, morphing. The skills we learnt in Google Plus: the openness, the free sharing of information and ideas, the willingness to take a risk and openly share our thoughts, are going to be there as we float across the web. The Google+ diaspora will be transformative and despite the sadness of its closure those of us who experienced its power to transcend barriers and bridge cultures will always consider it a success.” – David Amerland

For those who have images or video or other assets they’d like to save from their Google+ profiles, more details will be released in the coming months, and I will update this article accordingly.

However, even though I hadn’t been using Google+ for a long time myself, this announcement has me very concerned for other reasons. This is not the first tool or service or even social network that Google has ramped up, gotten people excited to use and incorporate into their daily lives, and then pulled the plug on. Do you remember Wave? Reader?

What Google product will be terminated next? Which tool that I’m using today will be gone tomorrow? Google Analytics? Drive? How Google handled Google+ will certainly make me think twice before investing heavily in another Google-powered platform or tool.

What about you? Will this closure impact you? Are you concerned about Google My Business or other Google products? I’d love to hear what you think in the comments below. 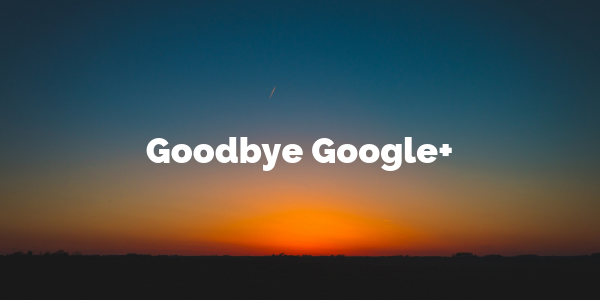