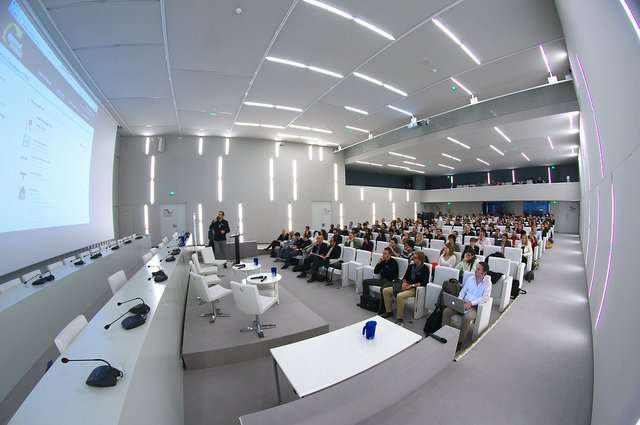 Have you ever been to conference? if not, you’re really missing out, and should find one for your industry right away. Conferences provide attendees with access to some of the brightest minds and influencers for that industry, and give you an opportunity to reenergize yourself in ways that you cannot possibly do on your own.

The problem though with many conferences is that speakers are limited to those that have existing connections with the selection committee, and of course the fact that the conferences have to be physically located in a conference center someplace, requiring anyone not within driving distance to make extensive (and expensive) travel arrangements.

Last June, Chris Dancy was invited to be part of a Google+ Hangout with some folks in London. Chris has been working in the IT industry for over two decades, and has attended and even spoken at many conferences. At the time, he thought Hangouts would be a great way for conferences to have virtual speakers. A month later, he was speaking in England, and it dawned on him that using Google+ Hangouts, the entire conference could be held virtually, not just portions, and it could have speakers from all over. He could also address some of these other issues with conferences. Chris teamed up with Nick Kellet and started a List.ly list in July to begin to crowdsource speakers. Anyone could submit speaker nominations across timezones and they received 30 submissions, from which they chose 24. This year, they’ve received over 50 submissions, and you can view the List.ly crowdsourced speaker list here: http://list.ly/list/…

Tomorrow’s Future Today (TFT) is a 24 hour content marathon, proving people do have attention for interesting characters, 24 in fact.

They streamed speaker presentations every hour, on the hour. Chris and Nick got together with Wade Foster to use his service called Zapier to help move content around. They wanted to be able to record on YouTube and then send that content to Vimeo and then Soundcloud and then iTunes and then create a deck for Slideshare and a PDF they could return to speakers for their blogs – creating a completely automated content conversion and distribution system. They also wanted to address the issue of people who were unable to attend, so they pushed content to Evernote and Kindle and email addresses.

This year, they have put a sponsorship model onto the conference with $300,000 worth of options. This allowed all speakers to receive a stipend of $500 this year, and they’ll receive $1000 next year.

A vendor can buy access to the content, or be live within the hangout and answer questions before or after the hangout. They can also purchase analytics, giving them access to specific data for specific regions and segments, as well as purchase capture of data (email addresses) when content is downloaded.

The next TFT begins on June 18, 2013, 1:00 GMT (6PM EST and 9PM PST) and continues for 24 hours. TFT also has a physical conference going on in London where the first and last presentations will be.

They are running the TFT conference twice a year, and looking forward to helping other conferences and organizations replicate the model and system. In fact, Chris met with Microsoft last month as they’re interested in pursuing a similar virtual conference system for their Sharepoint community.

Chris was very adamant that his focus is on allowing influencers an avenue to be influential and actually get paid. He said, “Why spend six months preparing a presentation for a conference where you deliver it to 100 people, when you could spend the same amount of time preparing a presentation that gets delivered to a global audience of thousands?”

Check out the full list of speakers here: http://tomorrowsfuturetoday.com/blog/2013/5/30/lights-camera-platform and also find the many different ways you can connect to the conference. And take a look at the many “firsts” that TFT has accomplished:

Granted, the TFT conference is all about IT Service Management and may not be your cup of tea. What’s groundbreaking is the model. Chris and Nick and Wade are completely disrupting the existing conference system, thanks in large part to free tools from Google, and this is just the beginning. As Google+ Hangouts continue to evolve, and as other tools and services become more widespread, there’s no telling how conferences and virtual meetings will evolve.