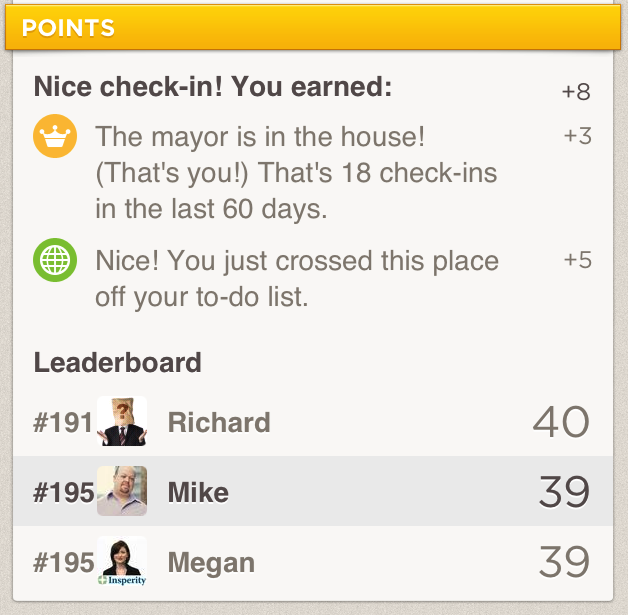 One of the interesting aspects of Foursquare, to me at least, was that I would achieve points and badges for different check-in’s to businesses. One point for checking in, a couple more if I’m the mayor of the location, and still more points for things like being the first of my friends, or checking in to five of the same kind of business within a week. These points aren’t worth anything, of course, but they would accrue over the course of the week and Foursquare will actually tell you how you rank according to the other people you’re connected with.

The purpose, of course, was to encourage our competitive nature. This style of competitive reward is what the industry is referring to as gamification. By making a game out of the activity, people are more inclined to participate. It might not lead me to go out more than I already am, but if I see that I’m in the top 25 of all my Foursquare connections, I might be more mindful of checking in to the places I do visit. Not only was this good for Foursquare, but it was also great for the businesses I was checking in to. Remember, every time you check into a business, it shows up on your activity feed for Foursquare for all your friends to see, and sometimes you might even be inclined to snap a picture and post your activity to Twitter or Facebook.

The problem is, in one of Foursquare’s app updates recently, they changed the check-in workflow. it used to be that as soon as you checked into a business, you’d see your achievement like in the screenshot above and have instant gratification and a report on what you just achieved and how you currently rank among friends. Now however, after checking in you’ll get a lightbox overlay that congratulates you in some way, and then end up on the profile of the business you just checked into. 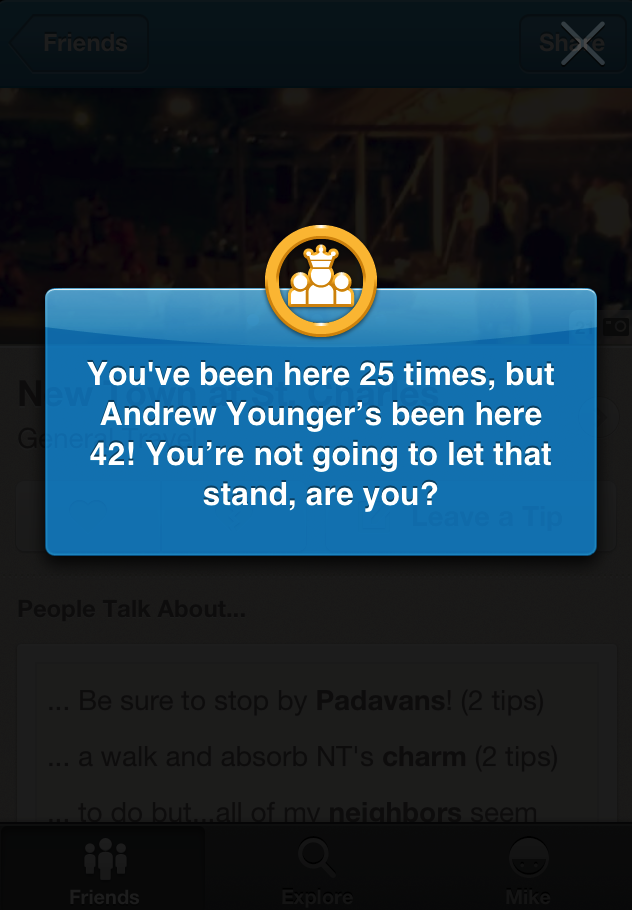 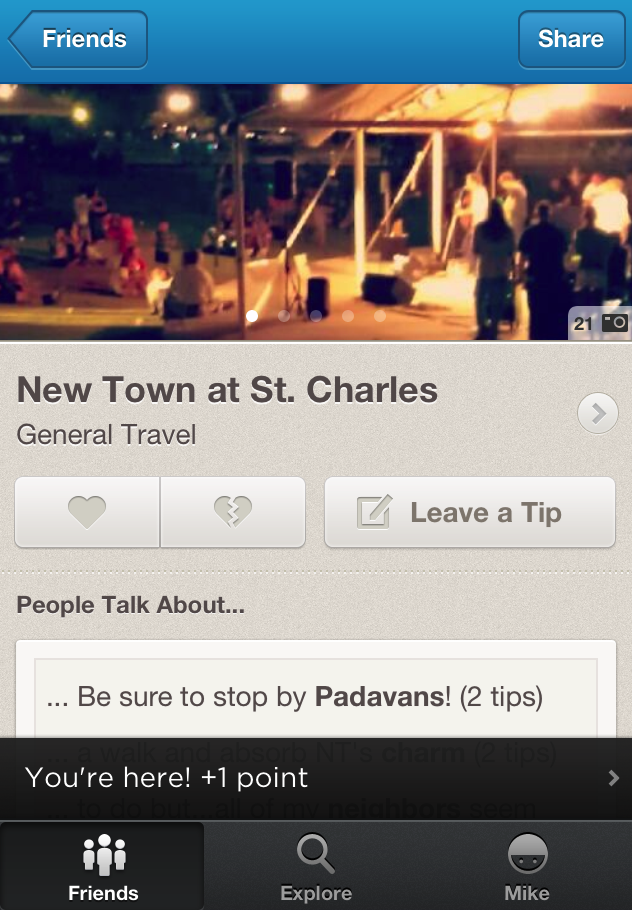 It’s nice that Foursquare wants to highlight the business and give business owners an opportunity to provide additional, relevant information. The business profile can include great pictures and tips and other helpful information. However, it’s been my observation that by reducing the point score to a small notification at the bottom of that window, Foursquare has really deadened the gamification of their service, which could result in less activity and less exposure for businesses.

Just yesterday we reported that Google Maps has released an update which now includes the ability to check out other businesses near you within common categories like restaurants and bars. If Google wanted to take over the Foursquare user space, it could. Just like Facebook, the ability to find and check in to businesses right from the Google+ app could be easily added. But unlike Facebook, Google already has a rich database of businesses thanks to Google+ Local, including detailed information and ratings. Google+ has rocketed to over 500 million users, while Foursquare has reported just 20 million users, and is a couple of years older.

Interestingly, Foursquare was founded by Dennis Crowley who, years earlier, started a similar project called Dodgeball which was purchased by Google in 2005, then later deactivated in favor of Google Latitude in 2009. Google Latitude is still available, and demonstrates Google’s interest in this space.

I don’t have access to the metrics that Google does, but it would make sense to me to fold the functionality of Google Local and Google Latitude into Google Maps and Google+, giving the hordes of Google users an easy way to find and check into businesses and share that activity with their growing Google+ connections. That kind of competition for Foursquare could run it out of business.

Foursquare did recently initiate arrangements with Visa and Mastercard, similar to American Express, where Foursquare users could pay for items at a participating business directly from their Foursquare app, and get a discount. So far, Burger King is the only announced participant and there have been no public statements from Foursquare as to the cost to businesses to participate or what the benefit is it Foursquare.

I think that Foursquare needs to go back to making point values front-and-center for users, and do more to make the achievement of points and badges interesting and competitive. I think that Foursquare is on the right track with their new Specials, but needs to do more. While I like Google and am an avid Google+ user, I believe that competition stimulates innovation and would hate to see Foursquare wilt away.

What do you think?