Reading Time: 5 minutes Accepting that the fall of Organic Reach has happened is the first step to recovery, and this article will guide you through the grieving process, from Denial, to Anger, Bargaining, Doubt and, finally Acceptance.

This is an intervention. Please sit down. I’m here because I love you and I want to see you healthy.

You have to come to a realization, one you’ve been avoiding for a while now.

Facebook really isn’t the same platform it was a year ago.

For years, social media managers and online marketers have been fighting tooth-and-nail to find success on Facebook. The platform offered us offering free marketing – the ability to communicate with our target market and promote brand awareness, products and campaigns to the Nth degree, without putting a single cent down on the table.

Is it really so surprising that Facebook decided they wanted to cash in on this little shindig they were running?

So they dropped organic reach (from somewhere around 16% to somewhere around 5%). That means that, for every 1000 Fans your business had on Facebook, about 160 of them were seeing your content this time last year. Now? It’s more like 30-35.

Accepting that this has happened is the first step to recovery, and this article will guide you through the grieving process, from Denial, to Anger, Bargaining, Doubt and, finally Acceptance.

Let’s get moving, because you poor people have hit rock bottom.

You refuse to believe that, if you just put a little more effort (c’mon man, just one more hit of the good stuff?), you could still find the Facebook success you used to bank on.

You spend hours reading the newest best-practice articles and testing and tweaking your posts, grasping at loophole straws and crawling along on your hands and knees looking for that last little nugget of organic reach. I swear it was here a second ago. I just had it!

You can’t admit to yourself that things between you and Facebook aren’t the same as they used to be. 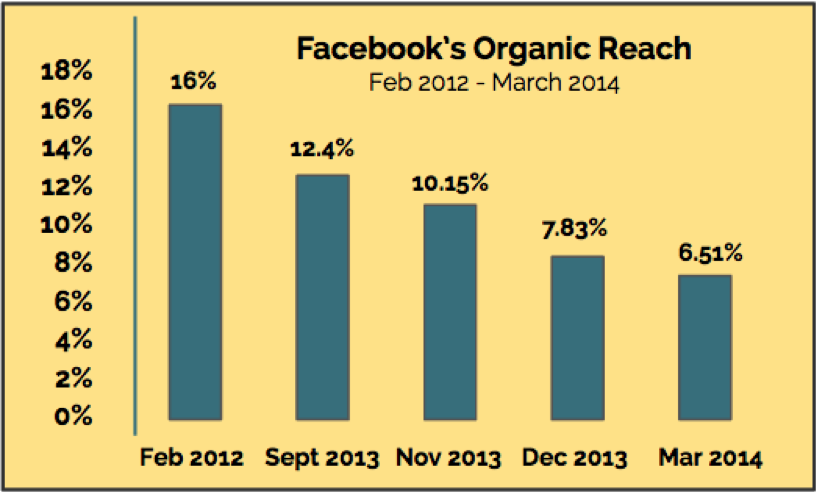 Okay, I see the graph, but you didn’t let me finish. I had a post just last month that had… 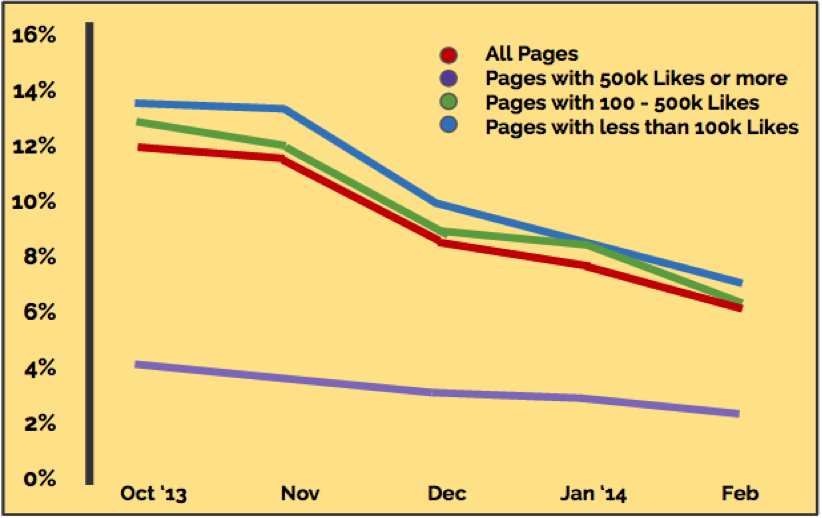 Additional Reading: The Facebook Hack That Will 10x Your Reach

Okay, okay, I see your point. Stop shoving graphs at me.

So you’re telling me those money-hungry so-and-sos in Menlo Park just get to destroy our organic reach and there’s nothing we can do?

Okay, I understand you’re frustrated, but here’s the thing:

That organic reach was never yours. Facebook was giving it to you as a gift.

For years you posted stuff like Home Depot has below, and thought nothing of it: 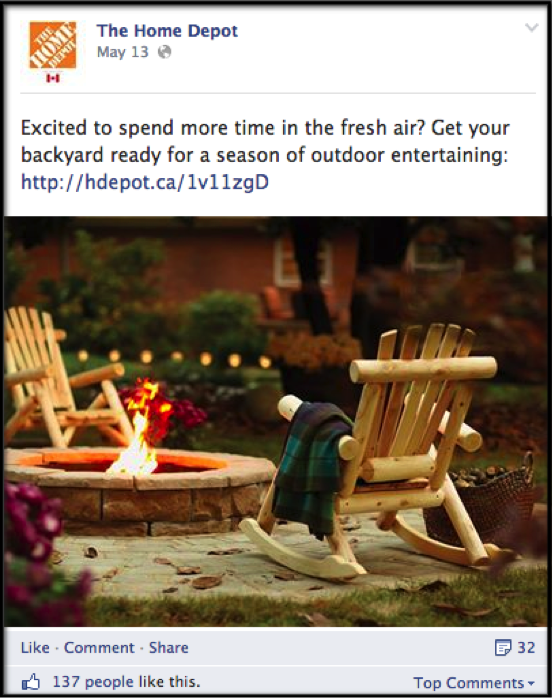 This is an ad. I know it might not look like it, but that’s because we’re all looking at it through our Facebook user glasses (and they are rose-tinted to scarlet).

This is a promotional piece of content, equipped with an eye-catching and romanticized image, a hook in the form of a question, and a Call-to-Action (“get your backyard ready…”). And Facebook has allowed Home Depot (and your business) to, completely free of charge, show this ad to their audience more than 2 million strong (or, more accurately, 100,000, as organic reach is about 5%).

Did we ever stop for a second and think to ourselves, “Wow, Facebook is giving us a pretty fantastic deal here?”

No, we didn’t. We just ran with it as fast as we could in one direction, and when Facebook decided to put their hand out and say “can you hold on for a sec while we reconsider this whole thing?” we slapped them in the face with articles like “Facebook Zero: Considering Life After the Demise of Facebook”.

Aw, c’mon, it can’t be that bad! What if I worked a bit harder? What if I put in a few more hours? There are new best practices that can increase your organic reach, right?

Sure, these will help. But, like the patch to a smoker, they won’t satisfy.

I can’t trust Facebook anymore. There’s too many changes, coming too fast, for a busy person like me. I don’t know where they’re going to hit me next and I’m reeling from the body blows.

Y’know what? Screw it. I’ll delete my page and use the platform only for personally stalking my exes and enviously looking at my brother’s trip to Zihuatanejo. I’ll put my time and energy into Google+, LinkedIn, Twitter and Pinterest instead.

Okay, but hold on for a sec. Even if you did devote all your time to those other platforms, you’d still just (just!) be reaching the amount of users Facebook has (like 1.31 billion to 1.28, depending on your source).

Not only that, but Facebook users are on the platform more any other (23% of Facebook users, in fact, log in more than five times per day).

So go if you like, but know that you probably shouldn’t. The platform still has a ton of value if you’re open to seeing it.

You okay? Take a deep breath. We’re going to be fine, trust me.

We’ll get you the help you need.

That help is going to come in the form of the most sophisticated, reasonably-priced and far-reaching ad platform the world has ever seen.

Coming to terms with the fact that Facebook is no longer giving you a free-ride you can take to the bank is the first step toward finding new success on the platform, success you can find through ads.

Stop thinking about Facebook as a social media platform, and start thinking of it as an ad platform instead. You’ll sleep better and that weird tic in your left eye will go away.

Why Facebook Ads are a Legitimate and Workable Alternative

In fact, Facebook allows you to target users based on 83 different makes and models of automobile (as well as eight different age categories and six different price segments).

In short, Facebook Ads aren’t a replacement for the organic reach of your Posts. There is no replacement for what you lost in the past 12 months – and I seriously doubt it’s coming back.

James Scherer is content manager for the Wishpond Blog. Wishpond offers a free website popup builder, enabling your business to create list-building and promotional tools of all kinds. Connect with James on Twitter.

Previous Post: « Reading The Unofficial Book On HootSuite Is Like Learning To Ride A Bike
Next Post: How To Leverage The Power Of HootSuite For Social Media Success »