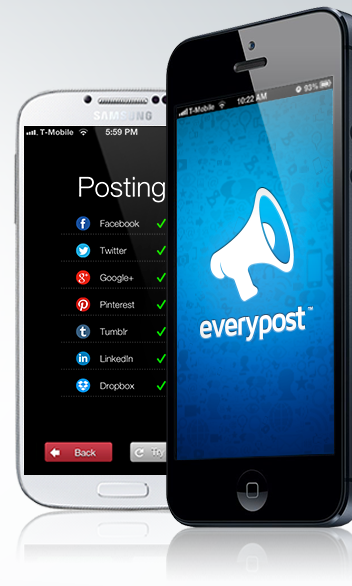 I love social media, but even I get overwhelmed when I want to share something with my various connections on more than one network. Not only do I have Facebook, Twitter, LinkedIn and Google+, but now Pinterest is becoming more popular, and I’m using Tumblr more and more. I use and recommend HootSuite, but when I’m on the go and using my iPhone, I can only post to my personal Facebook, LinkedIn and Twitter profiles.

I have found, though, an app that seems perfect for the personal social media user, or the user who is developing a personal brand on social networks.

Everypost (http://www.everypost.com) is an app that is available on both iOS and Android (though it’s native so there are some differences in app capabilities depending on platform). Once installed, you can configure the following social networks:

When drafting a new post, you’re presented with a typical text box for typing that includes the standard keyboard plus special keys for the @ and # symbols to save some taps. Another button indicates your total characters typed so you can be aware of Tweet limitations. If you reduce the keyboard, it reveals buttons to access your Camera, Video Camera, Camera Roll, Videos, Images and Miscellaneous, like music from Grooveshark.

When you choose to post an image, Everypost also includes a nice set of filters that can be applied just like Instagram. Filters include B&W, Amareto, Greys, Sepia, Stronger, Burning, 70s, Oldies, Martini, Vignette, Vintage, Jazz, Joyeaux, Blues, Heat, Every, Sunny and Blow. There are no other effects or borders for images.

Icons for your connected networks are arrayed above the post in order to easily select which platforms you wish to share to.

One very interesting feature that sets Everypost apart is its support for Dropbox. When posting to any network, you can choose to include Dropbox and thereby save that post in your own personal vault for future reference. You can also post to only Dropbox if you want to.

Aside from not being able to post to branded accounts (like a Facebook Page or LinkedIn Company Page), users are also unable to schedule or bulk post. Posts are composed one at a time and published immediately. Also, there’s no built-in link shortener so if you want to share a particularly long link, you’ll probably need to shorten it elsewhere and then past it in. I usually use HootSuite for that since I can then also measure link clicks. (But see the Update below.)

With an update available now for the Everypost app, the following improvements have been added:

Whenever I talk about the tools available to help people with social media, the topics of automatic and cross-posting come up. And they are valid concerns. I do not recommend that people completely automate their social media activity as it comes across as disingenuous. Nor do i ever suggest that people should post the same thing to every network all the time.

However, there are instances where it makes sense, and it’s perfectly OK, to post the same or similar content to multiple networks simultaneously. If you’re sure that your followers on all selected accounts would be interested, go ahead and share it. And now, with this update, you can customize each post while still working on them all at the same time.

When you first open the app and start a new post, you can type in whatever you want. Once you have more than one social network selected above the post, you can swipe to the right and view a composition window specific to that network. It will include whatever text and attachments you added to the initial post, so start there and then move to specific platforms. This will allow you to add quite a bit more information to platforms like Facebook, while still keeping within Twitter’s 140 character limitation.

Check out the app and let me know what you think! Links to download are below.