Do Eskimos Tweet? A Rare Insight on Global Social Media Use 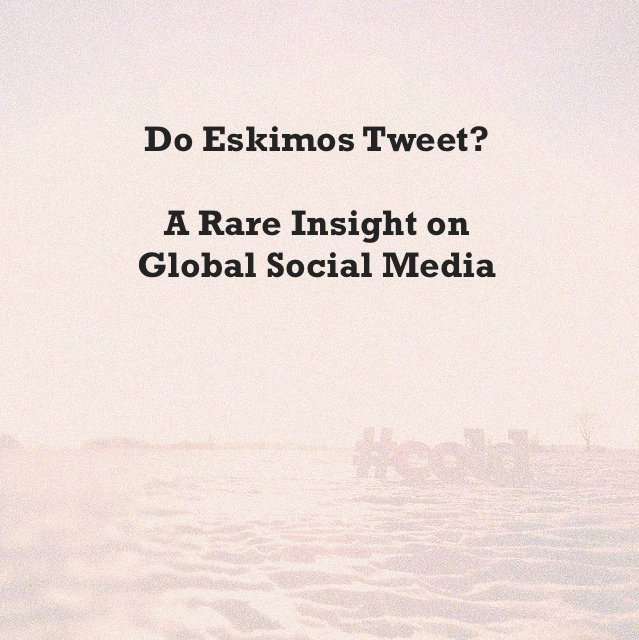 The idea of social media becoming “out of fashion” anytime in the future is just unthinkable. The internet has become a separate, yet ironically incorporated, world of its own, and within it spawned a self-sufficient social media community. They go hand in hand – as soon as the web will be able to penetrate all corners of the world, so will social media.

That can sometimes leave you wondering how other countries are taking a bite of this enormous power.

Cultures may differ, but when it comes right down to being social animals, everyone has the same blood running though their thought-sharing, people-stalking and attention-seeking veins. Only a handful of social networking sites have really captured the essence of a cyber society, and the monopoly has been consistent for at least the last 5 years.

“Bosnia. They don’t have roads, but they have Facebook?” – The Social Network.

A comprehensive July 2013 whitepaper by eMarketer, dubbed The Global Social Network Landscape: A Country-by-Country Guide to Social Network Usage consolidated a heap of social media statistics. It declared that social networking giant Facebook is practically taking charge of the planet except for China and Russia (the former has banned the site since 2009, while the latter supports a homegrown social site).

While it would be impractical to measure the reign of Facebook without taking into account a country’s population (in which case Monaco would top the list with 117.98% of its total Internet-using population already on Facebook), it can still be quite apparent which nation is the biggest fan of the social networking site.

China, which has the world’s largest population, only has 0.12% of its people using Facebook (again, because of the social media ban). On Twitter, however, it’s an entirely different story…

Twitter is still strong despite the numbers, even (and especially) in China

Forbes.com in May 2013 declared that China, despite its mandatory outlawing of the site, is the most active Twitter country in the world. While this is definitely affected by the country’s huge population (1.3 billion and counting), it is still a feat considering that they’re not even allowed to use the site. Chinese people have reportedly been using third-party sites to gain access and still keep tweeting despite the prohibition.

GlobalWebIndex, on the other hand, had a different vantage point to offer. In April 2013 they conducted a study of Twitter usage per country based on growth, comparing it to 2012 statistics. The results put Indonesia on top with a 44.20% growth from last year. Rounding up the top 10 (in rank, from #2) are Saudi Arabia, Singapore, US, Russia, Australia, France, Malaysia, Argentina and the Philippines.

Google+ has dethroned Twitter from the number 2 spot earlier in 2013, (and eventually YouTube bumped it into 4th place) but that doesn’t remove the micro-blogging site out of its social media reign.  Its continuing presence in the social lifestyle of prominent people keeps it place in the minds of their millions of followers, and it is unlikely that Twitter will lose ground.

The gang’s all here

While Google+ and YouTube battle it out for 2nd place worldwide, LinkedIn and Pinterest are also on the move. The top 5 are likely to hold their positions for the next few years, but don’t take it to the bank just yet – the unpredictability of social media has proven to be faithful through the years.

And it seems everybody feels that social networking has been a part of human lifestyle for ages when in fact in only came out in a bang about 10 years ago. Looking at how technology is exponentially evolving by the minute, 10 years can only be likened to a newborn child’s first week; there’s still so much more in store.

It’s no longer just a fad.

On the business side, what all this means is the word “investment”. Knowing the respective power of each of the sites, the logical step would be to carefully evaluate which site will best represent a brand in the social media world. For every business there’s an influential site waiting to be tapped.

And by the way, in case you were wondering: Eskimos do tweet.

Play to the strengths of your virtual event platform.

Tools & Tactics To Make Your Virtual Trade Show A Success