Digg has launched a completely new website, app and mobile version. The new Digg is being referred to as v1. The company’s blog post gave a sneak peak and took us through the motivation for completely rebuilding Digg and what will be coming. 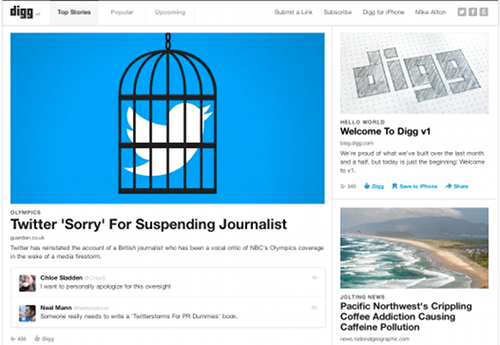 Digg (http://www.digg.com) has launched a completely new website, app and mobile version. The new Digg is being referred to as v1.

The company’s blog post gave a sneak peak and took us through the motivation for completely rebuilding Digg and what will be coming. Digg states that the new Digg will be a beautiful, image-friendly, and ad-free experience.”

The post goes on to state that the new Digg, initially, will not include a comment system. It states that they’ve been working on the revamped social bookmarking platform for 6 weeks, and that this was not sufficient time to implement the kind of comment system they wanted.

One of the more intruiging elements of the new Digg is that while users will still be able to vote for stories with a Digg to move a story closer to the top of a feed, Digg will also take into consideration Facebook Likes and Twitter Tweets to further enhance the story’s score. Here’s a mockup from Digg demonstrating how we’ll be able to see how a specific story has been scored: 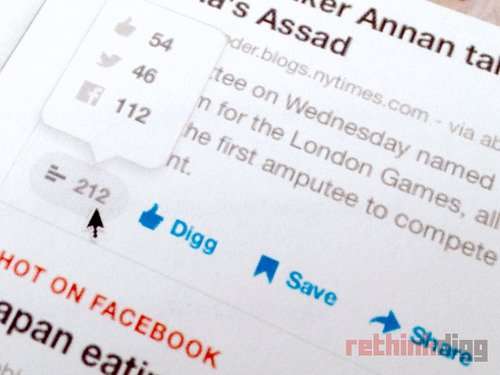 The new Digg will also include human moderators. The post explains that they will be using a combination of algorithms and a human team to help determine where stories should be ranked. While that sounds like a great idea in theory, it remains to be seen whether or not they’ll be able to keep up with the volume of submissions that Digg users create.

A new Digg app and mobile version of the site will be launched alongside the new website.

What do you think about the new Digg? Do you think this social media platform will be successful in rebranding and rebuilding itself?