Case Study: Get Crackin with Pistachios 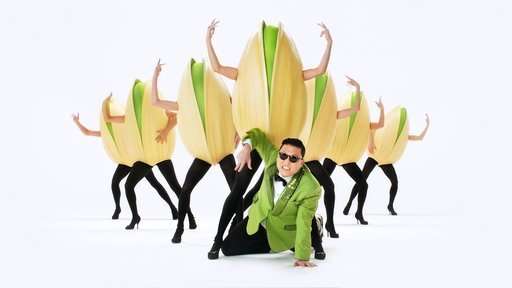 The merging of social media and television is becomining more and more obvious. What started with a few simple icons during commercials to make viewers aware of a brand’s presence on Facebook, has grown to extensive hashtag use and social media references. After the Super Bowl, social media integration has actually been a topic of great discussion, and Twitter has even gone so far as to purchase a company that specializes in monitoring and measuring social media response and engagement with live television broadcasts.

One company that is excelling at the new Social+TV advertising venue is Wonderful Pistachios.

Wonderful Pistachios has been running their “Get Crackin'” ad campaign for some time now. Each ad illustrates how a popular person or icon eats pistachios, and doing so in a way that’s funny and unique to that image. The Harlem Globetrotters, for instance, “have a ball” doing it. Here is an example using Google:

Over a year ago, Wonderful Pistachios created the first of several somewhat controversial versions of the ad, using the famed Winklevoss Twins. After the success of the movie Social Network, Wonderful Pistachios filmed the brothers cracking nuts, and one says to the other, “Hey, that’s a great idea how you cracked that!” They go on to say how no one would steal their idea, would they? And the narrator suggests that the Winklevoss twins “do it cautiously.”

There are several brilliant aspects to this campaign that marketers and business owners can take note of.

First and foremost, the commercials use emotion to gain our interest, and for this campaign the emotion is humor. The commercials are cute and simply do a great job of making the viewer stop and smile.

Equally as important, the commercials build on contemporary references by using popular people and icons. This plays off of the existing interest in those people or icons and gives the commercial instant recognition and connections. Social Media in general is popular and big news these days, so creating a few ads that specifically reference a social network or our usage of the networks is smart.

Brands need to encourage people to find them on social networks, and these commercials did a decent job of doing that by including a “Find us on” snippet with recognizable Facebook and Twitter icons. What’s still missing for virtually every brand commercial is Google+, so it will be interesting to see how that develops this year.

Wonderful Pistachios created a devoted landing page / website specifically for the campaign at http://getcrackin.com, and they included the address in the ad. The website includes all of the videos, as well as a blog and information on where to buy.

In a fantastic example of how hashtags should be used, Wonderful Pistachios now includes #GetCrackin in all their new ads. This is fantastic not just because the hashtag is used, but also because of the nature of the hashtag. Instead of trying to piggyback on a hashtag that’s more generic and already in use, like #Pistachios, Wonderful Pistachios invented their own unique hashtag. They can now monitor #GetCrackin and participate in conversations with their fans. Fans can check out #GetCrackin and find out more about Wonderful Pistachios and connect with other fans of the nut, comment on commercials, and share stories. This is the kind of content marketing that Coca Cola talks about and which every brand should be striving for.

And of course, there was PSY…

PSY does it, and we all go nuts!

This aired during the Super Bowl and was certainly one of the more popular commercials. Wonderful Pistachios played off of the viral nature of PSY’s 2012 hit video, and continued their fabulous use of icons, hashtags and landing pages.

What do you think of these ads? Did you find them interesting and engaging? What lessons can you apply to your own business and ad campaigns?